This Innovative Jewish Calendar Depicts Time As a Circle 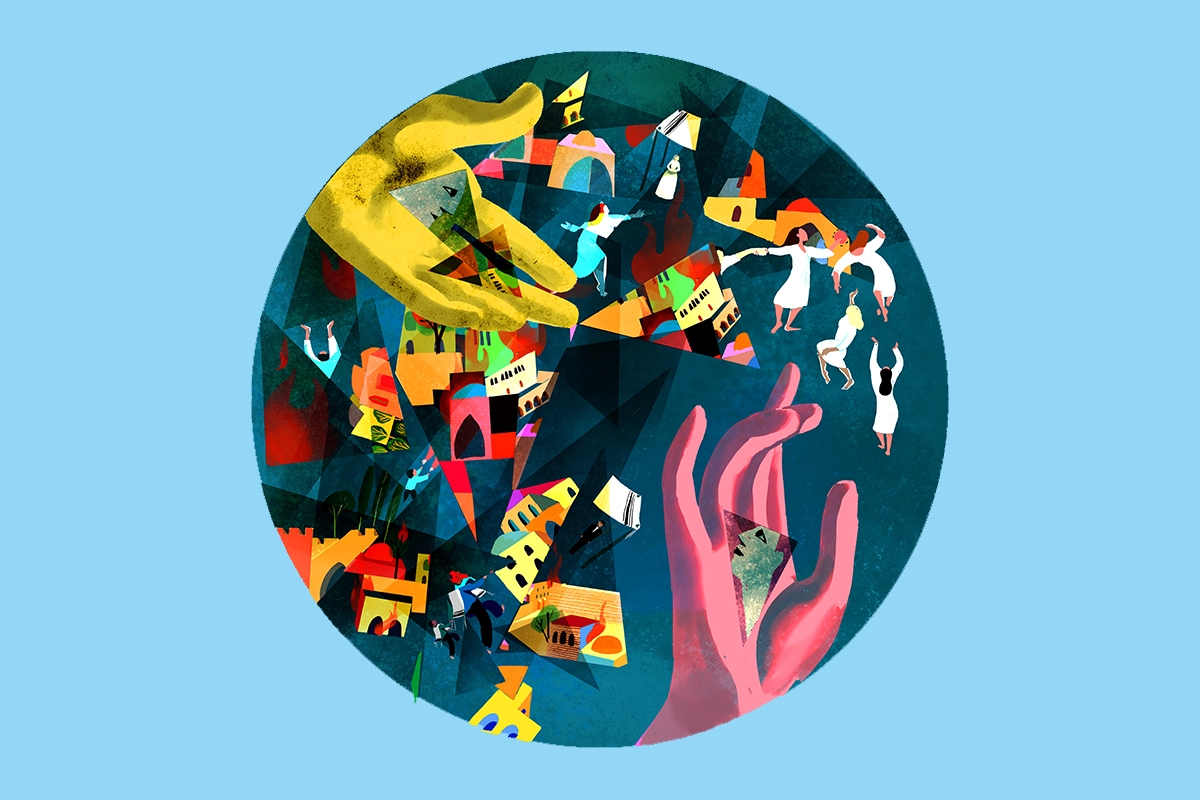 A page of the 5778 Misaviv calendar by Annita Soble

Time marches on, they say. But in what direction? Most calendars, with their columns and rows, would suggest time moves in a straight line, from Point A to Point B. But nature suggests something entirely different. From the movement of the moon around the Earth, and the Earth around the sun, to the concentric rings within a tree that chart its age, to the repeating cycles of the seasons, the natural world is all about circles.

In 2014, after two years of studying at a yeshiva in Israel, author, publisher, and teacher Jorian Polis Schutz says he began to experience the movement of time differently. Following the Hebrew calendar more closely, he could see the way in which the shape of time was not a straight line — but rather, a spiral. “When I came around the Jewish year with intention for the second time, I could feel the spiral shape of time,” he explains.

According to Schutz — who happens to be the brother of Colorado Gov. Jared Polis, who is the first Jewish governor of Colorado and the first openly gay man elected as a state governor —  circles and cycles are baked into the Hebrew calendar. “The Hebrew calendar is an incomparable marvel of circles within circles, of temporal rhythm and symmetry, of balance between solar and lunar,” he says. “Each month follows the cycle of the moon, beginning and ending with its renewal. The seven-day shabbat cycle is extended into the weeks (sefirat ha’omer), into the years (shmitah), and into groupings of years (yovel).”

Schutz asked himself why there were no circular Jewish calendars, and, not finding an answer, he decided to create one. Schutz’s parents had once owned a calendar publishing company, so you could say it was in his blood. But Schutz insists he only realized the connection after the project was well underway. He tapped some friends and artists and created Misaviv: Hebrew Circle Calendar. “Misaviv means ‘around’ or ‘round abouts’ or ‘from around,’ since ‘mi’ literally means ‘from,’” explains Schutz of the Hebrew name. “It’s used in a lot of different contexts in the Torah.” First released for the year 5776  — 2016 — the calendar encourages us to rethink the way we move through time, with an emphasis on rest both on a weekly and yearly basis.

I first came across the calendar at an event held at Schutz’s farm in Central Virginia. The illustrations, from month to month, were evocative and thought-provoking, at once familiar and esoteric. This, I sensed, was an artifact that I would collect and keep for years to come. (Nowadays I use pages from my old calendars to decorate my sukkah). Beyond its physical beauty, I found something compelling about this way of presenting the Jewish calendar — in English, so a non-Hebrew speaker like me could appreciate it, and with dates like the beginning of the biblical flood called out on the page for me to contemplate. More than just a calendar, it felt like a tool for connecting with my Jewish heritage. And now, buying and displaying the calendar is part of my Rosh Hashanah tradition.

Printed on high-quality paper and spiral-bound in a circular shape, each month is rendered in a unique artistic style by a diverse cross-section of mostly Jewish artists from around the world. Traditional naturalistic and botanical imagery — including a ram for Elul, a month that begins with the blowing of the shofar (a ram’s horn), and a pomegranate tree for Shevat, the month of Tu Bishvat, the birthday of the trees — are intermingled with more interpretive and abstract representations of the months.

At first glance, the calendar appears dizzying. The week begins on Sunday — or Yom Rishon — in the outer ring. Each day of the week, you travel toward the center of the circle, which is Shabbat, literally the center of the week. That’s meant to signify how, Schutz says, “Shabbat pumps energy into your heart and into your week.”

Each week of the month is represented by a wedge in the circle, which begins at the top and moves counterclockwise, the direction of the moon, echoing the connection to the lunar cycle. The months begin and end with the new moon, another element reflected in the calendar’s circular design. The Misaviv calendar recognizes the major Jewish holidays, most of the U.S. federal holidays, and the yahrzeits of people who have contributed to the study of Torah in some way, from Abraham Ibn Ezra, a Jewish philosopher of the MIddle Ages, to Rav Moshe Feinstein, a revered authority on Orthodox Jewish law. And, Schutz says, users are encouraged to add their own significant yahrzeits and other dates right on the page, to create a living calendar that can be practical as well as beautiful.

In his introduction to the 5779 calendar, Schutz expands on the idea that a circular representation of time allows us a better opportunity for reflection and projection, saying, “Sometimes when we return to a place, it is as if we also return in time, to encounter an earlier version of ourselves. Sometimes our past hits us over the head, and sometimes our future grants us a prophetic hint of what is normally kept hidden.”

After a successful seven-year run, this coming year, 5782, is the final year for the Misaviv calendar project. That’s because its production reflects the shmitah, or sabbatical year, which occurs every seven years and dictates that Jews in the land of Israel should let their land lie fallow, as well as relinquish stockpiles of food and to forgive debts. “It’s been a slumbering concept in the Jewish tradition,” says Schutz, who recently made a study of the agricultural shabbat, which he’ll release in a pamphlet published by his company, Deuteronomy Press.

This moment of pause and relinquishing resonates deeply with Schutz: “It’s for a sabbath of the land,” he says. “I do happen to have a farm, so I relate to it.” Though the farm won’t observe the shmitah year according to Jewish law, Schutz says he’ll think about what he can relinquish symbolically, including this project.

While this particular project has reached its zenith, he may produce other calendars in the future. “I don’t believe that this is the ultimate design or concept of time,” he says. “There are many different ones that could happen, and this one belongs to this cycle. We should be comfortable with cycles and the fact that they end.”