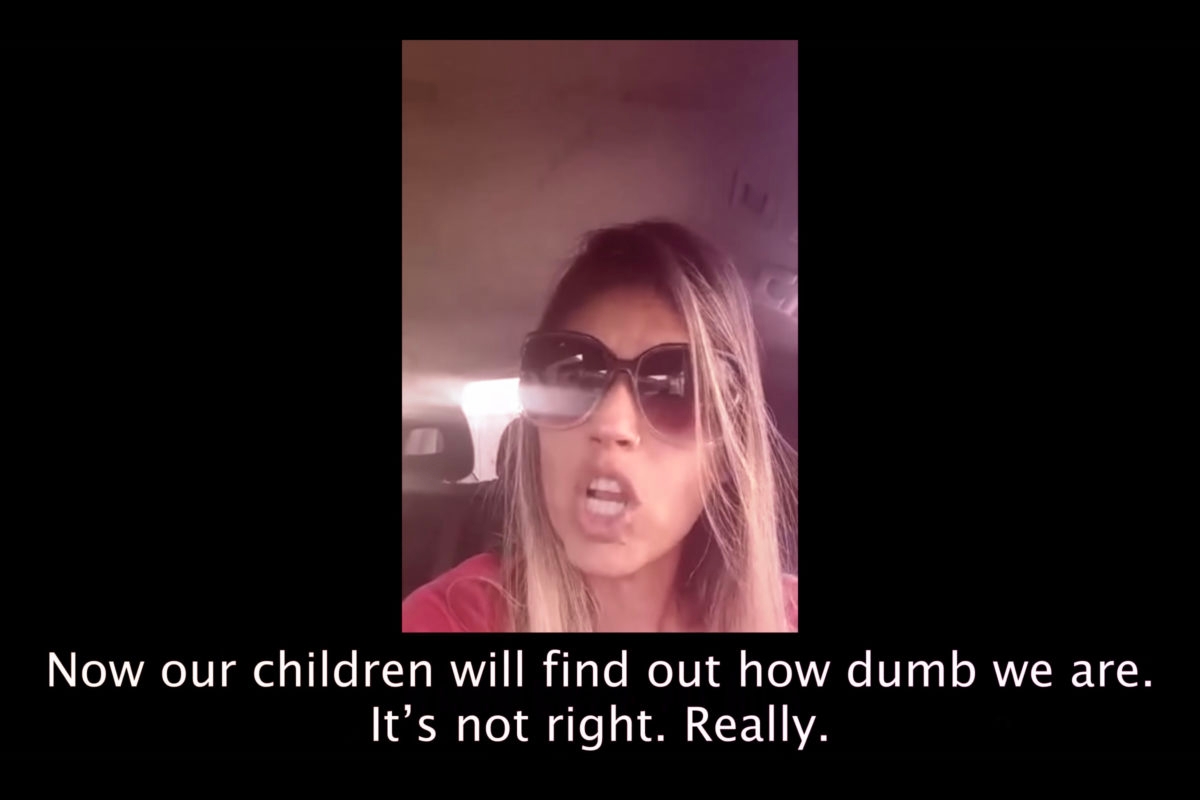 If, like us, you are frustrated with your new gig as a homeschool teacher, you’re definitely not alone.

One hilarious Israeli mom, Shiri Kenigsberg Levi, created the most relatable video about her frustration with the super-intense homeschooling experience. We totally feel her pain — and we relate to her rant 100 percent.

Schools in Israel shuttered last week, and aren’t scheduled to reopen until at least after Passover. Since then, the mother of four has been inundated with homework assignments for her school-aged kids (Raz, 15; May, 13; Nir, 10; and Guy, 8). As she says in the video, after she received an actual music score to work on from her son’s music teacher on day 2(!) of homeschooling, Levi broke down and raced to her car to record a funny and cathartic video, railing against the unrealistic expectations.

In the video, Levi rants about how her children’s teachers keep asking her how they feel. “How does the child feel? He’s on the cellphone all day. He’s happy!” she yells at the camera. “Ask me how I’m feeling! Falling to pieces! I go from one child to the other — here’s science, here’s math — forget it! And how am I supposed to know all those things? Now our kids will find out how dumb we are. It’s not right. Really!”

The 41-year-old posted the video on the WhatsApp group she frequently posts on: MaMatzchik (an amalgam of the words mama and matzchik, the Hebrew word for funny).

“If the corona doesn’t kill us, distance learning will!” she says at the end of the video.

The video has since gone viral in Israel, after it’s been shared all over Facebook and YouTube, garnering thousands of views. And now, thanks to some quality subtitling, you can watch it too — and laugh your behind off. Honestly, it’s so funny and so true.

Levi, as it happens, is a special education teacher, and she is used to high-stress situations. She and her family live in Ashkelon, a city that is often plagued by rocket fire from Gaza — so this isn’t her first experience with remote learning. But this specific situation is truly the straw that broke the camel’s back.

So yeah, if you’re falling apart, just know that even battle-worn Israeli moms are freaking out. Levi is actually juggling sending assignments to her special ed students (“I don’t overburden them, but I do want them to learn,” she told Mako) with her own kids’ assignments. She says she hasn’t had time to cook since the whole experience with remote learning began.

״As a mother, really, this isn’t simple,” she told Ynet. “This is not a vacation. On vacation, the kids go out and host friends, go to friends, go to attractions. I’m being very strict right now. We’re really at home. No one comes in and no one leaves.”

Relatably, she said the most important items in her house are breakfast cereals and phone chargers.

Still, the family is getting by. More than anything, Levi believes that the cure to this tough situation is a good laugh. “Humor is my therapy in life,” she said. “For me, it’s the cure to every crisis.”