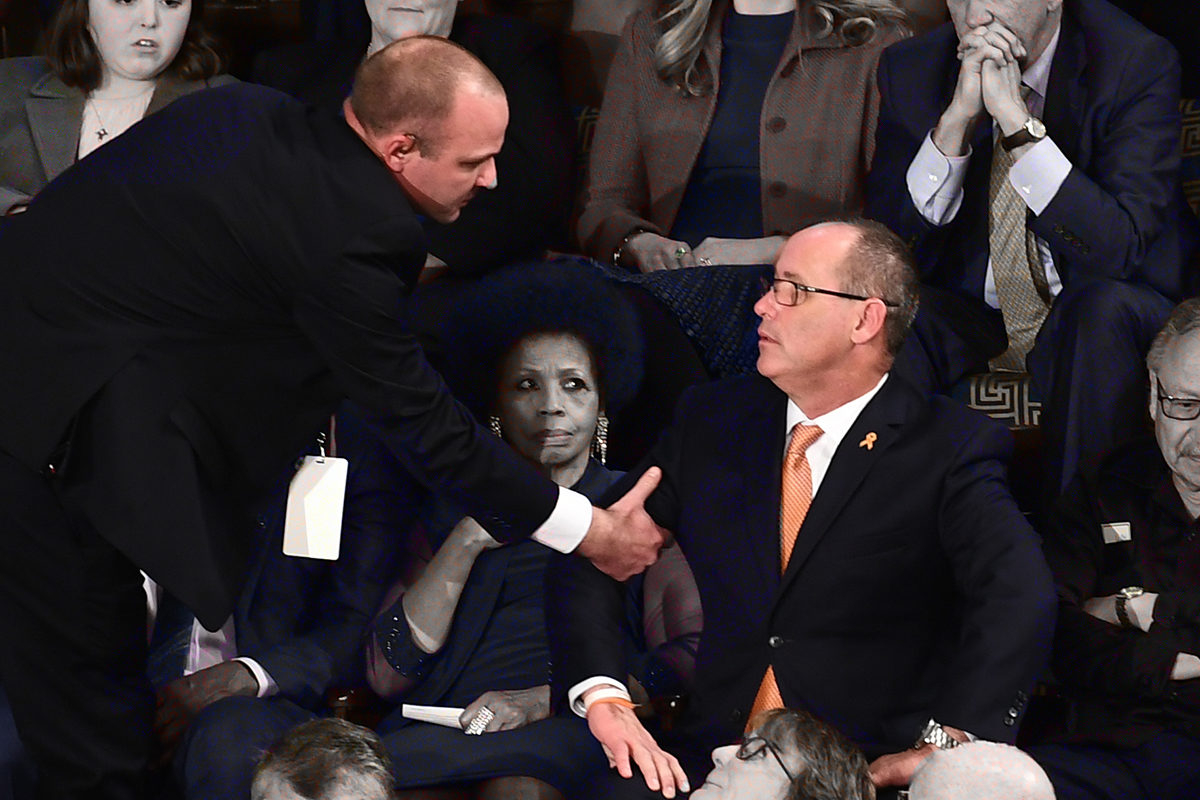 Fred Guttenberg tragically lost his daughter, Jaime, at the horrific shooting at Marjorie Stoneman Douglas High school in Parkland, Florida on Feb. 14, 2018. She was just 14.

Since then, Guttenberg’s life has completely changed: He has dedicated himself full-time to making sure that Jaime, the 16 other victims of the Parkland shooting, and the hundreds who have since lost their lives in mass shootings in this country will not die in vain. (There were 417 mass shootings in the U.S. in 2019 — a record high number.) He has become one of the most prominent voices in the movement for gun control.

Prior to the Parkland shooting, “I was nothing more than somebody who used to sit at my television and scream when I would see these elected leaders,” Guttenberg told our colleague, Josefin Dolsten, at JTA.

These days, however, Guttenberg is someone who is often present in the room where it happens. In September 2018, he made headlines when he approached Judge Brett Kavanaugh during his Supreme Court confirmation hearing and got the cold shoulder from him. (Kavanaugh later said he thought Guttenberg was a protester.)

Fred Guttenberg, the father of Jamie Guttenberg who was killed in the shooting in Parkland, Fla., left, tries to shake hands with @realDonaldTrump's Supreme Court nom., Brett Kavanaugh, right, during a lunch break. Kavanaugh did not shake his hand. (AP Photo/Andrew Harnik) @ap pic.twitter.com/smcCGuLT6X

And now, Guttenberg and his passionate activism are back in the news again. Last night, during President Trump’s State of the Union address, Guttenberg, who was seated in the gallery, was removed from the House chamber for protesting during Trump’s speech.

Here’s what happened: Guttenberg was in attendance as a guest of House Speaker Nancy Pelosi. When Trump said he will “always” protect the Second Amendment — which he described as being “under siege” — the grieving Jewish dad yelled out, “What about my daughter?”

According to Will Goodwin, who sat close to Guttenberg, the Jewish dad could not stomach Trump’s comments. He allegedly “leaned over and said ‘I’m about to get kicked out but I can’t stand this.'”

Guttenberg, as predicted, was then ejected from the room by Capitol Police.

Later, Guttenberg, 54, explained his actions on Twitter, writing that the night was tough for him and that he let his emotions get the best of him. “I should not have yelled out,” he wrote. “I am thankful for the overwhelming support that I am receiving. However, I do owe my family and friends an apology. I have tried to conduct myself with dignity throughout this process and I will do better as I pursue gun safety.”

(1,2) Tonight was a rough night. I disrupted the State Of The Union and was detained because I let my emotions get the best of me. I simply want to be able to deal with the reality of gun violence and not have to listen to the lies about the 2A as happened tonight.

While Guttenberg apologized, many on Twitter posted messages of support with #ImWithFred. David Hogg and Cameron Kasky — activists and survivors of the Parkland shooting —  both posted in praise of the Jewish dad, as did the Gabby Giffords Foundation and actor and activist Bradley Whitford.

.@fred_guttenberg lost his daughter in the Parkland shooting and has worked every day since to end gun violence.

Tonight he stood up to a president that believes peace and the second amendment are mutually exclusive and was removed.#ImWithFred pic.twitter.com/RprctMp2iE

#ImWithFred . Retweet. Make it trend. Follow @fred_guttenberg. Help him in his heroic fight to save innocent lives.

As a parent, I can’t help but empathize with this. While it’s hard to conceive of Guttenberg’s loss unless you have experienced it, it’s very easy to understand why someone in his situation would be so overwhelmed by frustration and grief that they’d need to shout their pain into the room. But I also appreciate Guttenberg’s heartfelt and levelheaded apology.

This dad’s commitment to calling out politicians is remarkable: Just one week after the Parkland shooting, he confronted Senator Marco Rubio during a town hall. He called Rubio’s response to the shooting “pathetically weak” and said: “Look at me and tell me that guns were the factor in the hunting of our kids in this school this week. Look at me and tell me you accept it, and you will work with us to do something about guns.”

Some may not agree with his methods. In fact, Andrew Polack, another Jewish dad who lost his daughter, 18-year-old Meadow, in the Parkland shooting, is on the opposite side of the gun debate. But the truth is that Guttenberg’s work is impressively relentless.

He is taking his overwhelming heartbreak and turning it into action — dedicating his life to making sure that his daughter’s life has not been lost in vain.  He is striving to change the gun laws in our country and to support policies that will make our country — and our kids’ schools — safer. (None of the policies he supports, he says, “are anything along the lines of overturning the Second Amendment or taking away the guns of lawful gun owners.”).

Guttenberg told The Guardian that his work is a coping mechanism: “The only time I don’t think about my daughter and just want to cry, to be honest, is when I’m busy doing this.”

I certainly can’t imagine what it’s like to wake up every day to fight a system that can seem callous and impervious to a parent’s pain and grief. I admire Guttenberg for his gumption, and I thank him for fighting for all of our children the best way he knows how.