This Jewish Mom Wants More Girls to Be Magicians 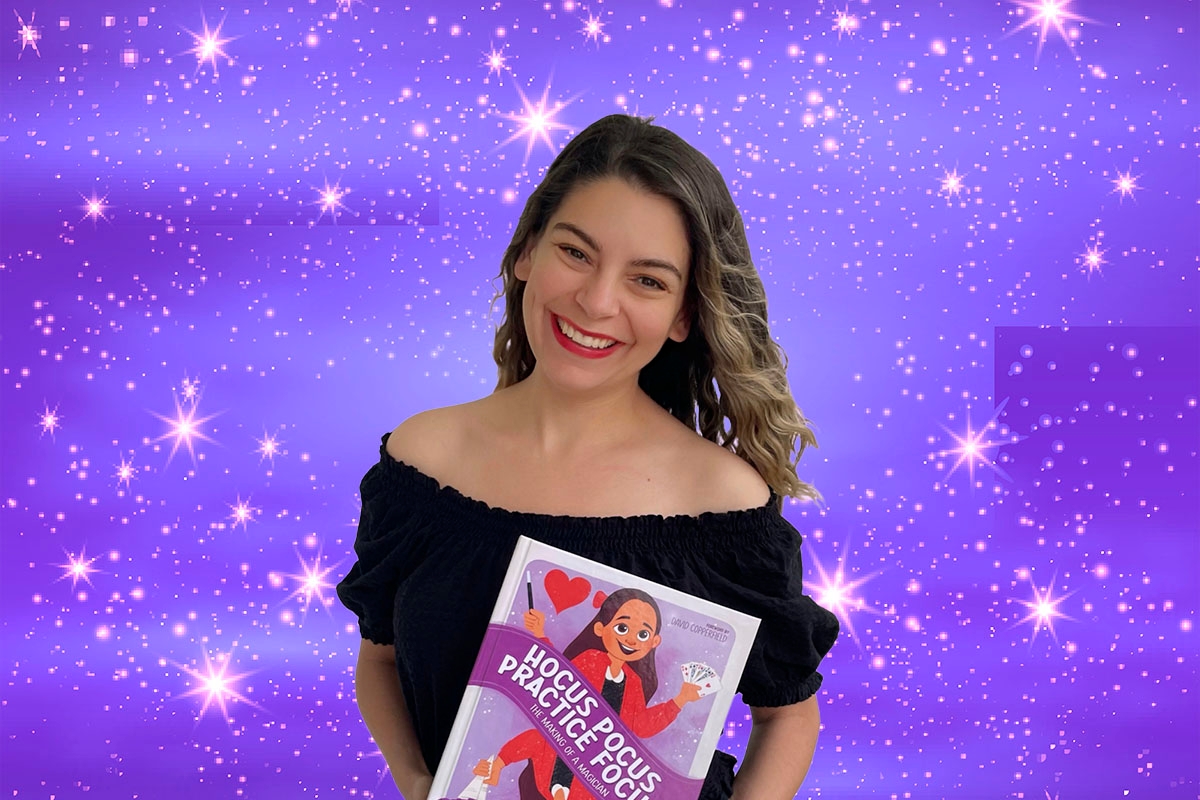 Mila, the adorable heroine of Jewish mom Amy Kimlat‘s debut children’s book, “Hocus Pocus Practice Focus,” decides that she wants to be a magician after seeing an enrapturing show from Greta the Great. Greta teaches Mila that magic tricks aren’t as easy as they seem — and Mila learns that behind every quick magic trick, there’s a lot of practice at work.

Mila’s experience is one that I wish I had as a child. Growing up, all the magic shows I ever watched were performed by men, and it made me feel that magic, while thrilling and exciting, was just not for girls. Of course, there were no books like Kimlat’s that showed serious girls practicing magic.

Magic enraptures kids of all ages and genders, and yet, I think most of us would struggle to name even one famous female magician. Jewish magicians? There are a ton of them, from Harry Houdini to David Copperfield, who, as it happens, wrote the foreward to Kimlat’s book — which he said is “a book that every child interested in magic should have and every girl interested in magic needs.”

Kimlat herself leads a pretty magical life — she’s married to Kostya Kimlat, a Jewish Ukrainian American professional magician, and the two have two little girls, Estelle and Adelaide. Kimlat started writing this book when she was pregnant with her oldest, and she says her 3-year-old daughter is already incorporating the lessons of the book into her life. Just this week, she heard her daughter say, “That’s okay, I just need more practice,” after struggling to preform a magic trick her father taught her.

Kveller spoke to Kimlat about the connections between Judaism and magic, what it takes to be a successful magician, and the amazing Jewish women magicians that you need to know about.

Why do you think so many Jews are into magic? Why are there so many cool Jewish magicians and illusionists — from Houdini, to David Copperfield, to Uri Geller?

There are a lot of Jews in magic, just like there are a lot of Jews in all performing arts — comedy, acting, theater and singing. Magic is something that thrives through a strong sense of community. Magicians have to rely on each other to share information and learn, and that strong sense of community is part of the fabric of being Jewish. Plus, getting great at magic has also required intense study of dense books — something that’s practically in our genes.

I think it’s common for people who feel like outsiders to be attracted to magic. It’s a skill that requires a significant amount of independent practice to pursue, and the fruit of that labor is the reward of receiving acceptance from lots of people. I think that is certainly the case with my husband, Kostya Kimlat, who is a professional magician and arrived in the U.S. as a Jewish Soviet refugee from Ukraine at 9 years old and began pursuing magic after just a few years.

Why do you think all the famous magicians we know about are men?

There are many women who are magicians, but most people can’t name one. I think that’s because magic — the theatrical kind — is by nature secretive and exclusive. Secrets are circulated amongst those “in the know.” The result is, very often, women and people of color have been excluded. And most magic tricks have been created by men for men, who wear suit jackets with sleeves and lots of pockets, and previously, top hats.

There’s a lot of veiled misogyny baked into some of the most famous classic magic acts, like cutting a woman in half. The fact is, women simply haven’t had as many role models, and even today, girls interested in magic might have a harder time finding a female role model or mentor in their city. That’s part of the reason why I wrote this book — to give girls a chance to see themselves in the magician role.

How did you get into magic? Who were your favorite magicians growing up?

My husband is a professional magician, but I joke that I was the first magician in our family. I performed a magic show for my third grade class, and again for my eighth grade class. In eighth grade, I spent the school year researching magic and its history for a presentation to my class, and I remember sharing stories about David Copperfield and Penn & Teller. The fact that all three of these legendary magicians have endorsed my book and have quotes on the back cover would absolutely blow the mind of middle school me.

Who are some women magicians that you think we should know about?

There’s a rich history of women as magicians. Gloria Dea and Jen Kramer are two professional magicians more people should know about, and they both happen to be Jewish, too. Gloria, who turned 100 years old in August, is said to be the first magician to perform in Las Vegas, way back in 1941. Jen Kramer is another talented magician, and she’s the only woman who headlines a Vegas magic act today.

Is there a connection between Judaism and magic?

The magic world has a lot in common with Judaism. The focus on books, the healthy debate, the decentralized authority, the sense of community. There’s also a strong history of Jewish magicians, including current names like David Copperfield and David Blaine, as well as big names from a century ago, like Harry Houdini, Max Malini and Alexander Herrmann. There were also many talented Jewish magicians who were murdered during the Holocaust.

What made you decide to write “Hocus Pocus Practice Focus?”

I quit magic after the show I performed for my eighth grade class didn’t go as planned. A secret ball in my cups and balls routine errantly rolled into view, and to top it off, I received an A-minus on the yearlong project. I figured magic just must not be for me. I wish someone had told me that you have to keep going, and that failure is a necessary part of the process to becoming great at magic, or at anything. I also think I subconsciously figured magic wasn’t for me as I got older, since I didn’t know of any women who were magicians. I wanted to write the book that I needed as a kid… a book that would normalize seeing girls and women in the role of magician and teach the necessity of persistence.

What are you hoping kids will take from this book?

There’s a line in the book that I think sums it up really well: “Magicians work hard just like dancers and singers. They don’t become great just by snapping their fingers.” I want kids to know that you aren’t born being good at doing magic tricks, or singing, or dancing, or much of any skill. I want kids to know that you can’t just snap your fingers and be great. You have to work hard, and you have to fail, usually a lot, on the road to getting great.

And any advice for aspiring magicians?

If you want to become a magician, my advice would be to seek out mentorship and expect failure. But really, this is advice that applies to any creative endeavor, and it’s advice I try to remind myself everyday as a first-time author.