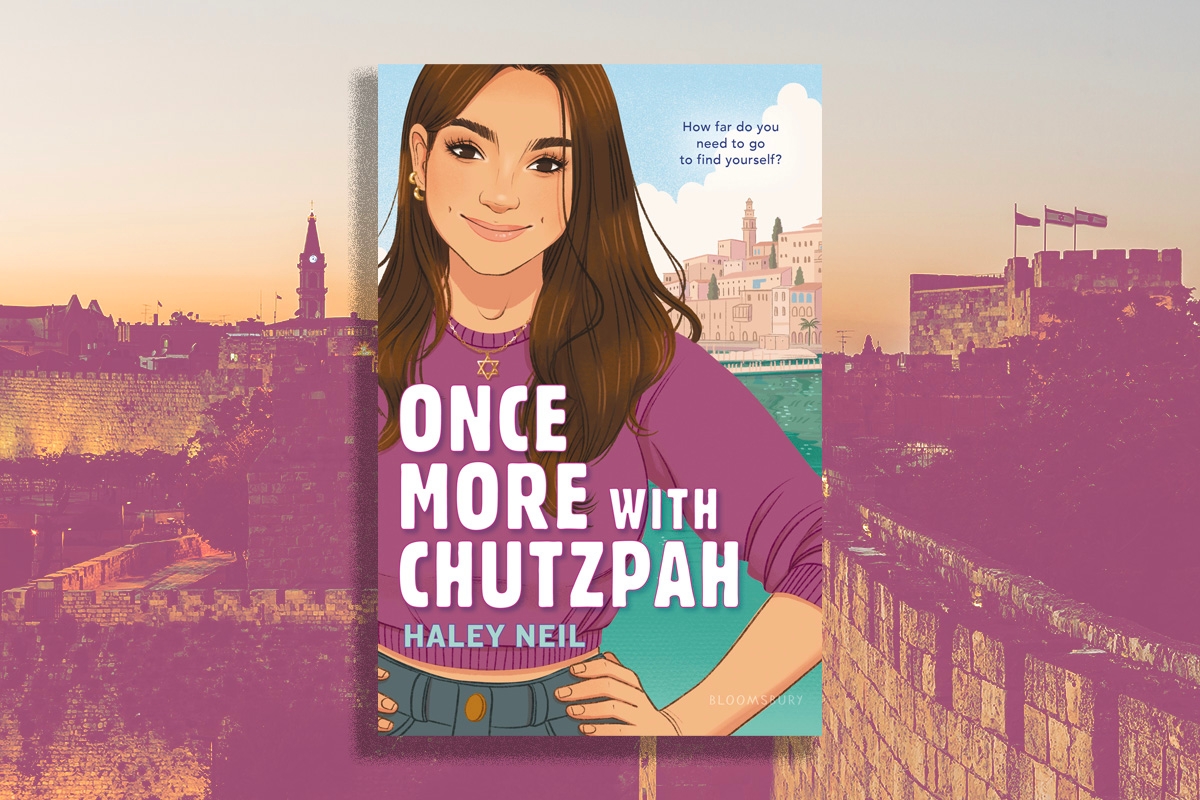 Just like a Birthright trip, Haley Neil’s “Once More With Chutzpah,” a young adult novel that follows a high school senior as she goes on an organized temple youth trip to Israel with her twin brother Max, packs in a lot in one experience. Tally’s journey touches on so many charged topics — grief, anxiety, asexuality, the Holocaust, the Israeli-Palestinian conflict, Jewish identity, and internal tensions in the Jewish state between liberalism and religion.

Yet, while “Once More With Chutzpah” doesn’t have an agenda when it comes to Israeli politics, long before it came out, the book faced a barrage of online hate and criticism. When the book’s publication was first announced, many criticized its framing as “Becky Albertalli meets Birthright,” and accused it of pinkwashing. In February of 2021, Neil shared the cover of the book (gorgeously illustrated by Leni Kauffman), and faced another round of backlash. On both occasions, the Goodreads page for the book was inundated with dozens of one-star ratings calling out its subject matter — before the book was published, so before anyone had read it.

“I was caught off guard with what happened,” Neil tells Kveller over email. “It didn’t matter what my book was actually about; there wasn’t even a synopsis available when my Goodreads page was attacked with hateful ‘reviews.’ I was in the early stages of editing with my publisher. No one had read this story.”

Neil and her team did end up making changes to the book following some of the responses, and the book opens with a letter to the reader clarifying that “this is, ultimately, one story. The complete story of the Middle East includes other voices, including those of young people who live in Palestine and/or are of Palestinian descent.”

“Once More With Chutzpah” is one of still relatively few YA novels that features an asexual protagonist, and following Tally as she literally discovers the words for her identity and where she falls the asexual spectrum, is an intensely emotional experience, especially in what is stereotypically seen as such a charged sexual environment.

Now that the book is actually out and having the chance to read it, I can say that Neil handles this very full journey deftly, never making the reader feel overburdened or rushed. She’s surrounded Tally with an incredible crew of diverse Jewish characters — among them her madrich (guide) David Damari, a Yemenite Jew — whose nerdy and flirty exchanges with Tally are a delight, and the fashion-loving new friend Saron, an Ethiopian Jew who you will want as your new BFF by the end of the book. As Tally is an aspiring Broadway lyricist, every chapter is titled after the name of a musical song — with references to “Waitress” and “Fiddler On the Roof.”

I talked with Neil about the process of writing this book, how she dealt with the backlash and why she added a reference to one 2015 Eurovision song.

What made you decide to write a book that centered on a trip to Israel?

I was actually inspired by my own trip to Israel, which is where my grandma is from! Back in 2017, I visited the Western Wall and attended the Jerusalem Pride Parade on the same day. That experience is where the first spark of an idea started.

Writing this book was partly a way to process my own experiences, but it was also an act of hope. I think stories offer us all a bit of compassion. We see parts of ourselves in unexpected places or situations; we empathize. I wanted to show a main character who was struggling to find her place, even when it came to her own identities. She is Jewish, but she doesn’t always feel like she’s enough.

There were a lot of negative responses to the book before anyone had ever read it because of the subject matter. Was that something you expected or did it take you by surprise?

It’s strange because I was prepared for some of it. I thought I’d have to worry about neo-Nazis or blatantly obvious antisemitic internet trolls. I expected the book community to be supportive, to identify the hate for what it was.

I saw members of the book community act like my debut getting attacked online was something I deserved because I was said to have done things or shared sentiments that are, in reality, directly opposed to how I feel — comments like, “This book supports genocide,” assumptions about the context and content of my story. I saw fear in other Jewish authors. There were also extremely kind members of the community who reached out to check in, offer support and even do things like flag antisemitic content on Goodreads, so I wouldn’t have to see so much hate.

I have Israeli family. I wrote about the meaningful experience of visiting the place where my family is from. I was inspired by a pilgrimage to the holiest Jewish site that is still standing today. This in no way means I condone the actions of the Israeli government, but I shouldn’t have to say that.

How did you deal with the backlash?

I was in a really hurt place for a while. I couldn’t sleep; I was overwhelmed with anxiety. I felt like I was constantly under attack, even in my everyday life. I was so afraid that this book that I wrote, which is so much about love and growth and acceptance, would never reach an audience because people who had not read it made false accusations about its contents.

Some things that helped: I read that donating to a cause that is directly opposed to what you’re facing can help give you a sense of agency, so I donated to Stomp Out Bullying. A couple of my friends helped me realize that none of this was really about me as a person, or even about my book — since no one making these painful comments had actually read it — which really helped me feel a lot safer. I started volunteering at my local library, where I now work.

Sometimes I still worry that this won’t reach readers because of what happened. I worry that it could hurt my writing career. I know there will be people who, even now that it’s out, will mock this book — say it’s too Jewish or not Jewish enough, dismiss the discussions on antisemitism. But I’ve also had readers reach out to me and tell me how much it means to see themselves represented on these pages in a way that they haven’t before. I’m not sure I can express how
much that means to me.

I’m still writing. I’m working on new projects that I’m really excited about and can’t wait to share with readers. I guess what I’m saying is, all of that hate didn’t stop me. I am a real person with real feelings who is going to keep doing the thing I love.

I love all the little Israeli details in this book! The pop-rock chocolate, the reference to 2015 Eurovision “Golden Boy” (deep cut!). What was research for this book like?

A lot of those specific details were drawn from my own trip! I ate a fairly embarrassing amount of Elite popping chocolate when I was in Israel and I still get more excited than I probably should when I find it in the local kosher market. As for “Golden Boy,” that’s a little nod to my days teaching preschool. The song was a hit with my group when I went on my trip and, on a whim, I played it for my students. All of these 3-, 4- and 5-year-olds absolutely rocked out to the lyrics about showing people Tel Aviv, it was adorable. They loved it so much that it became a dance party requirement.

As for additional research, I interviewed other people who had gone on trips to Israel. I spent hours talking to my Israeli family. And later, I had input from wonderful early readers and sensitivity readers on everything from anxiety to politics to the queer representation. It was important to me to hear from others, even in the areas that were influenced by my own experiences.

There’s a particular scene in which the characters talk about moments where their Judaism was questioned — is that a personal experience you’ve had?

Definitely! I was raised in an interfaith household. I went to a temple preschool and grew up with Jewish traditions in my house. I spent summers interning at the Cohen Center for Modern Jewish Studies during undergrad. As I already mentioned, I have Israeli family.

But I’ve heard that I’m not Jewish because of my background, particularly because my dad is Jewish. There’s still a part of me that feels like I need to defend my connection to my own family. I’ve also experienced antisemitism in my everyday life. There was this moment (that I actually echoed in the book) where a person at a party was baking cookies and actually uttered the words, “Oh, you’re Jewish, your family must be real comfortable with ovens!” I still have no
idea how anyone could consider that an appropriate joke.

So these moments of questioning yourself, looking for the proof, struggling and being othered regardless, have happened to me. But they’re also happening to people from all different backgrounds. That’s why I wanted to show this struggle in Tally’s story. Writing internal questioning into a coming-of-age story felt like a way to tell readers, it’s OK, you’re more than enough!

I love the demisexual/asexual representation in this book. Tally’s process of figuring out her own sexuality is so touching — what made you make that choice?

I knew from the start that I wanted to take Tally on a journey of personal discovery, of finding the words for how she feels. In my own experience and in talking to others on the asexual spectrum, I’ve noticed a kind of queer story that I hadn’t seen before. Instead of coming out, it’s more a path of realizing. I think the wonderful thing about labels is that they can help a person feel like they’re not alone, can offer up a word for how they feel. Not everyone wants to use a
label and sexuality is such a spectrum. All of that is completely valid.

At the same time, words have power. The first time I saw the words asexual and biromantic used in a book, I burst into tears… in public. I was reading “What If It’s Us” by Becky Albertalli and Adam Silvera in a coffee shop and a side character said those words so casually. That small instance of representation meant the world to me.

I had an early reader tell me that this book gave them words for how they feel, that they’re still figuring things out but this helped. That’s more than I ever imagined could happen from my writing.

What are you hoping readers will take from this book and Tally’s story?

I’ve been thinking about this a lot as I work on my second book, another YA set to come out next year. I try to include a central message in my stories, to consider what I want the reader to leave with from book to book. For “Once More With Chutzpah,” that message is this: You are not alone. It’s OK not to be OK. You are more than enough.

Get “Once More With Chutzpah” on Amazon or Bookshop.org