This New Ladino Rosh Hashanah Video Is All About Motherhood 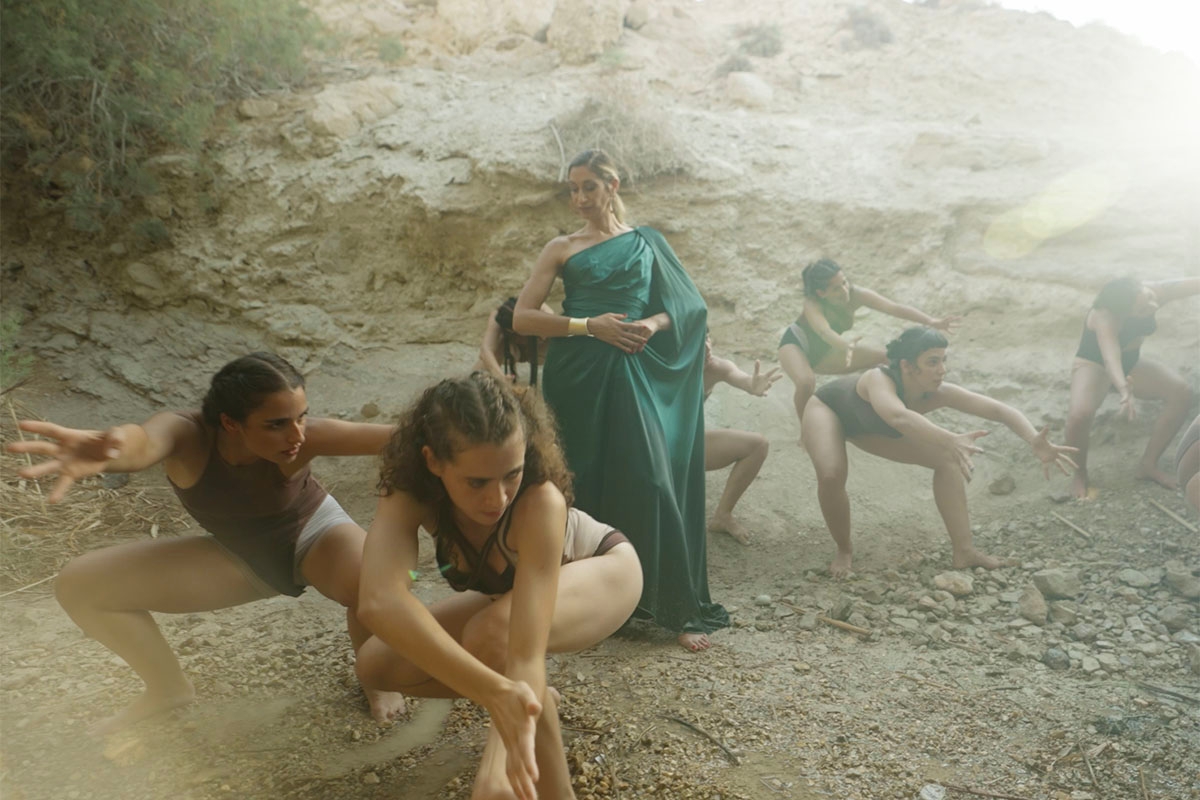 “Oh, what nine months / Of discomfort you have had,” starts the Ladino song — “Oy Qui Muevi Mezis (Oh What Nine Months),” and it’s the perfect summation of pregnancy, at least for many of us.

Ladino musician Sarah Aroeste is releasing a new recording and video of this song, just in time for the Jewish New Year. For the artist and mother of two, who discovered the song while researching her 2021 album, “Monastir,” (named after her family’s Balkan hometown, which was destroyed in WWII), the connection between the song and Rosh Hashanah feels natural. “We are all metaphorically pregnant with new possibilities in the year to come,” Aroeste, who is also a children’s book author, told Kveller over e-mail.

The new video is captivating. Shot in a wadi — a watering hole — in Israel’s Ein Gedi natural reserve in 100 degree heat, it features a team of dancers representing the nine months of pregnancy who dance and writhe around Aroeste, who looks regal in a velvety green dress and large hoop earrings.

The watering hole was, for Aroeste and her team, the perfect setting. Water is so often tied with birth and life. Her director, Michael Ben-Lior, chose a specific hole shaped like a canal, which she felt “truly represented the birth narrative.”

The song is part of a repertoire of Ladino birth songs called “Kantikas de Parida,” which have traditionally been sung by a rejoicing Jewish community upon the birth of a baby. It’s funny, relatable and ageless (“When the midwife says ‘push, push!’ the mother yells ‘Oh God deliver me!'” is another great sample lyric). It is one of celebration and community — a community that no longer exists, in the case of Monastir (which is now Bitola, North Macedonia). More lyrics ask for the new mother to be fed with “fattened chicken” and the father to bring wine for a hearty revel, and offer blessings of long life to the mother, newborn and father.

“That combination of new beginnings, community, food and blessings conjures up Rosh Hashanah for me,” Aroeste says. “We all have the chance to breathe new life into the year ahead, with our community surrounding us.”

For Aroeste, reviving this song was itself a process of rebirth. “I was enamored of the idea of including a song about pregnancy and new life in contrast to a Jewish community that no longer exists,” she tells Kveller. Releasing a song about new life, she felt, was a poignant reminder that Monastir is still alive in the blood and the voices of those who descended from its Jewish residents — that she, and other Sephardic descendants, are still here.

As Aroeste sings it, you can hear the echoes of the song back through the generations, to all the babies brought into the world with its melody. You feel the warmth and embrace of a community that brought generations of mothers up, the village that offered support through the hardships of childbirth and early motherhood.

Aroeste feels that by reviving this song, “I’m singing and breathing new life into the memory of this once-flourishing community. Certainly, as a woman and as a Jewish mother, I think a lot about my responsibility in creating new life and passing on traditions.”