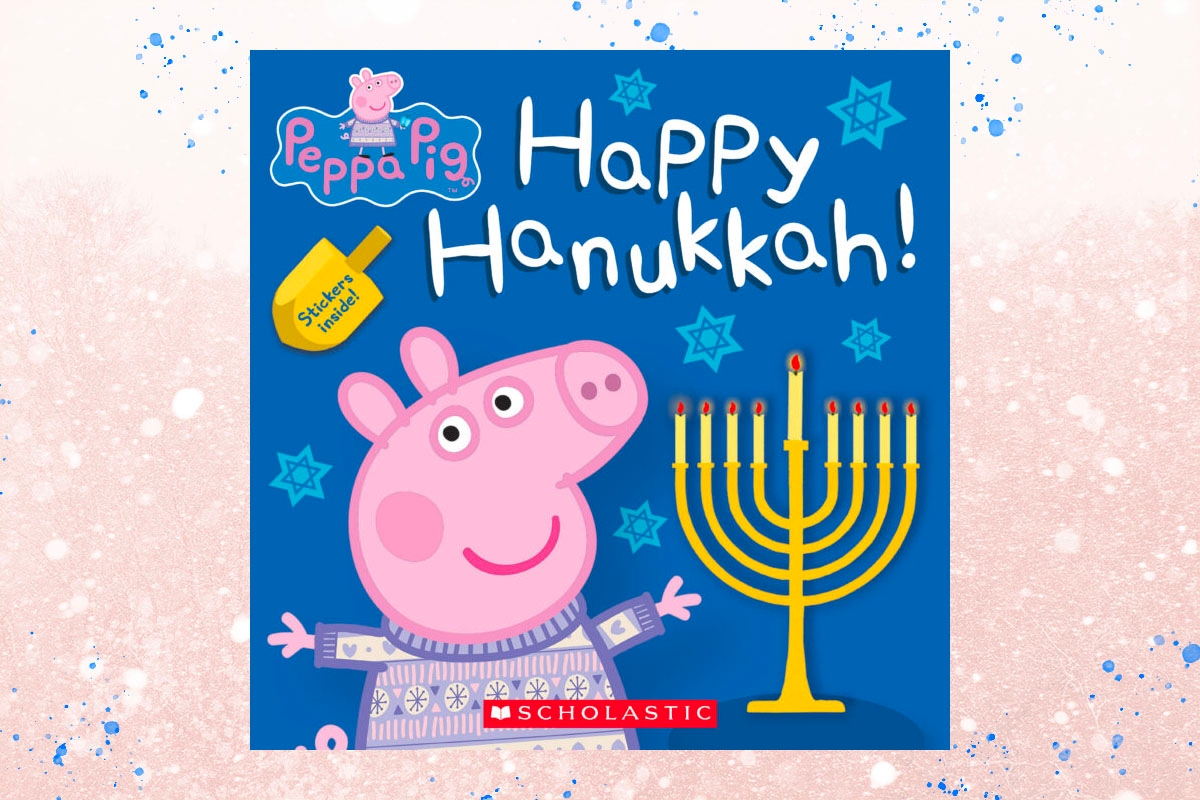 If you are a parent of a toddler or a young kid, you’ve probably heard the good word (though good is subjective) about “Peppa Pig.” The porcine sensation has American children speaking with a British accent — probably the best British offense against Americans in our nation’s recent history.

And while my 4-year-old has not caught the Peppa accent, he has 100% caught the Peppa bug this past year. I personally have mixed feelings about Peppa. I’m not a fan of the way she teases her dad about his big belly, her playground politics or the way she sometimes treats her little brother George. But ultimately, I do want to encourage my son to find the joys in muddy puddles.

Which is why I was happy to discover, while indulging my Target app addiction, that there is a Peppa Hanukkah book, simple titled “Happy Hanukkah!,” which came out in 2020, and which at the time sold for a very affordable $2.49. I ordered it and put it up in the attic, readying it to be one of my son’s eight gifts of Hanukkah.

Unfortunately, I did not conduct a quality control inspection until this week, when I finally decided to read what I bought my son. And, um, I may have some regrets.

Now animation franchises have explored Hanukkah before. We have a Hanukkah “Curious George” book that I feel pretty OK about, and obviously, “Sesame Street” Jewish holiday books are all very solid. There’s even a “Paw Patrol” Hanukkah book that is, well, fine, whatever. But this Peppa book? It has me feeling a little iffy.

In the book, Grandma Pig is frying up latkes — “a latkes [spelling mistake in the actual book!] is a potato pancake, it’s what people eat at Hanukkah,” she tells Peppa and George, which Grandpa Pig goes on to define as “the Festival of Lights” and that people celebrate it all around the world. Tonight, Peppa, George and their grandparents are going to celebrate it, too.

Who are said people celebrating Hanukkah all around the world? We don’t know, because the word Jewish doesn’t get mentioned in the book. We do know the pig family isn’t canonically Jewish, as religion doesn’t get mentioned in the show, and while I’m not here to say that pigs can’t be Jewish, especially if they don’t practice cannibalism, I feel like we maybe would’ve known.

In the book, Grandpa and Grandma Pig use the Hanukkah menorah as an excuse to teach the kids about the joys of electricity and how to play dreidel. They also only celebrate the eighth night of Hanukkah.

In most children’s books about Hanukkah, franchise characters celebrate the Jewish holiday with their friends. We assume that these friends are Jewish, even if it isn’t always explicitly stated in the books (the best books, like the aforementioned “Sesame Street” ones, usually do though). It seems like maybe one little mention of the fact that Hanukkah is a Jewish holiday wouldn’t be too much to ask.

Now I’m not really concerned about what my son is going to think of all the Hanukkah logic inconsistencies in this book. What I worry about is that a non-Jewish Peppa loving family will read this book with their kids and then decide that this year, they too, like Grandma and Grandpa Pig, will celebrate Hanukkah at home. And, um, that’s just not cool. It’s fine to celebrate a Jewish holiday with your Jewish friends if they invite you for a celebration, but it’s definitely not fine to co-opt our holidays if you’re not Jewish for the fun dreidel games, the noshes and the pyrotechnics.

For me, this is another strike against “Peppa Pig.” I’m not sure I even really want to give this book to my son — I may just give him the Peppa Hanukkah stickers it came with, which admittedly are pretty fun, instead.