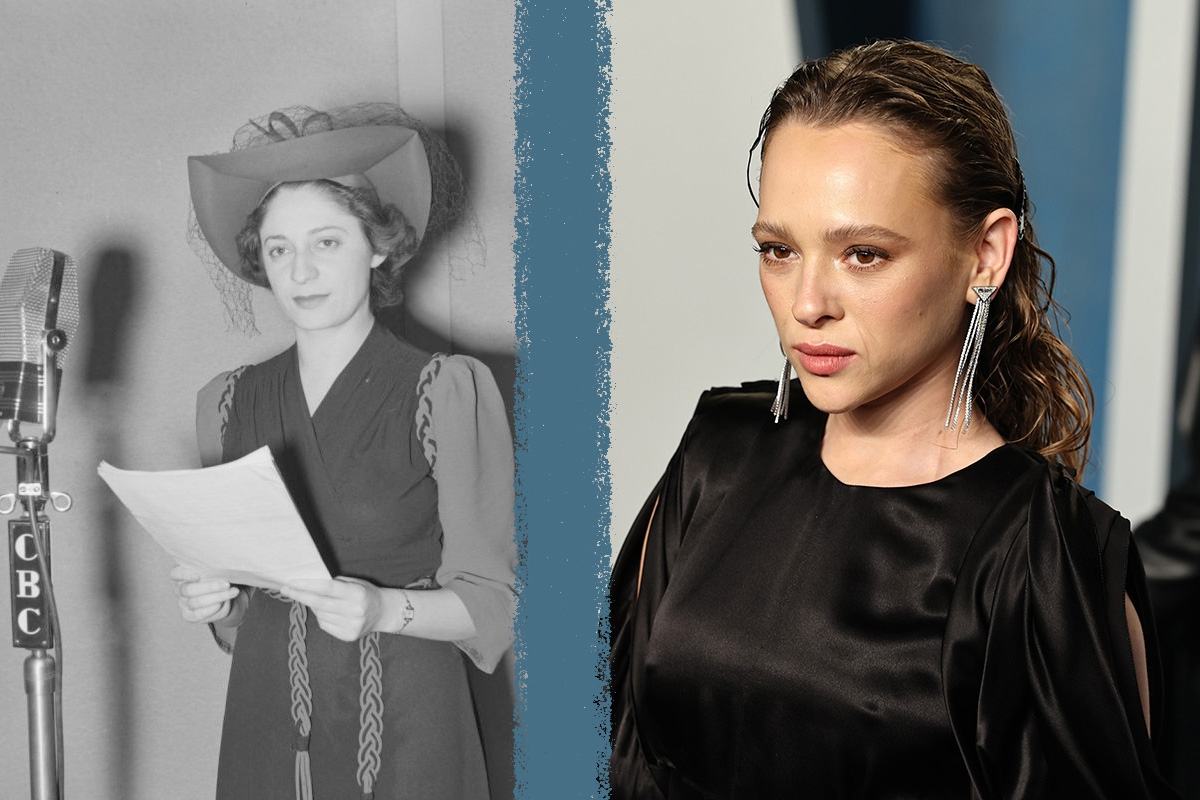 Shira Haas is a powerhouse. The “Unorthodox” and “Shtisel” star is getting cast in some pretty big upcoming projects: She’s going to play Golda Meir in the Barbra Streisand-produced “Lioness,” and she’ll go into the future as detective Maplewood to investigate a murder in 2044 in the upcoming Netflix show “Bodies,” based on the comic of the same name.

She’s also going to help retell the story of a Canadian Jewish legend who deserves to be remembered — conductor and violinist Ethel Stark. That’s right: If you loved those musical scenes in “Unorthodox,” you’ll be excited that Shira Haas is making onscreen music again. She’ll star as the history-making violinist and conductor in the upcoming movie “Ethel.” The movie will be directed by Irish filmmaker Aisling Walsh, who directed 2016’s “Maudie,” the critically acclaimed biopic of Canadian folk artist Maud Lewis starring Sally Hawkins and Ethan Hawke.

Ethel Stark was just 29 years old when she made history as the founder and the conductor of Canada’s first women’s orchestra, Montreal Women’s Symphony Orchestra, also known as MWSO. She co-founded the group with the help of wealthy Canadian socialite Madge Bowen in 1940, a time when women were believed to be not only mentally but physically incapable of playing instruments in an orchestra.

“I remember that review that women’s lips could serve a better purpose than playing wind instruments,” one of the members of MWSO recalled in a 2012 CBC radio documentary about the orchestra produced by David Gutnick.

It took Stark and Bowen 10 days to get the orchestra together, recruiting women who played instruments and asking them to bring along any other girl they knew who played a musical instrument — or even had an affinity for music so they could be assigned an instrument. The group included lots of housewives, stenographers, maids, teachers — women of every class, religion and race, according to Maria Noriega Rachwal, a musicologist who wrote a book about Stark and MWSO. And it was no ragtag band of amateurs — Stark “was demanding. She knew what she wanted; she got the utmost out of the group of women.” In the first years of the MWSO, hundreds of women wrote to Stark congratulating her and wishing to join the orchestra.

“Ethel didn’t realize it, and neither did we, but she was beginning a movement of feminism among women musicians,” said Pearl Rosmarin, one of the cellists of MWSO.

“She was a pioneer for women’s rights and advancements in the arts,” said Montreal archivist Jessica Zimmerman in a 2020 Jewish Public Library podcast episode.

Stark’s orchestra went on to make history as the first Canadian orchestra to perform at Carnegie Hall in 1947. The reviews were glowing, and it was a boon for Canada, according to Noriega Rachwal.

“Ethel Stark encouraged me to be who I am today. I can do things and I don’t have to worry about people putting me down anymore… Being able to play in that orchestra, I would say, was the highlight of my life,” said Violet Grant States, who was part of MWSO. She became the first Black woman in a Canadian symphony orchestra and the first Black female symphony musician to play Carnegie Hall.

“She was a lady of firsts,” said Noriega Rachwal. The daughter of Austrian Jewish immigrants, Stark was born in 1910. Her family was “politically progressive, middle-class and musical,” according to Noriega Rachwal. She showed prodigious musical talents in her youth as a violinist. At age 17, she became the first Canadian woman to be accepted at the Curtis Institute of Music in Philadelphia.

Stark was an accomplished musician beyond the NWSO and a big name in the world of radio orchestras — she performed with the Montreal Orchestra, the CBC Montreal Orchestra, the Toronto Symphony Orchestra and even conducted the Miami Symphony Orchestra. She played all over the world and even made some history in Israel, where she became the first Canadian and the first woman to conduct the Kol-Israel of Jersualem.  You can listen to some archival performances of Ethel Stark’s here.

Stark lead the MWSO for 25 years. In 1965, the group folded — in part for budgetary reasons, but also because the world of music was changing. Orchestras began adopting screened auditions, which, according to Noriega Rachwal, allowed many more women to join them. Still, NWSO remains one of the longest-running women’s orchestras in North America.

Stark died in 2012 at the age of 101 and is buried at the Spanish & Portuguese Congregation Cemetery in the city. She received the Canadian Order in 1979, and a park in Montreal, right by the Montreal Women’s Center, is named after her. Not much has been made public about Stark’s personal life — “when you look into her personal life, you really see just the music,” according to Zimmerman.

Casting Haas as Stark is an absolutely inspired choice, as Haas herself is a history-making Jewish woman — the first Israeli woman to be nominated for a best actress Emmy. Here’s one fierce groundbreaking artist playing another. There’s no release date for the historical musical drama, but we can’t wait for more of the world to discover the incredible forgotten story of Ethel Stark.