What Happens When My Child With Autism Becomes an Adult With Autism? – Kveller
Skip to Content Skip to Footer

Gone is the unsteady toddler on wobbly legs and the silky hair that could be washed with a washcloth. Gone is the little one who at the end of the day would cry a sea of warm tears because she was so tired, but who couldn’t relax enough to fall asleep without my hand stroking her back. Gone is the little child’s whose differences often hid behind chubby cheeks, dimpled elbows, and the world of being a small child.

My daughter is growing very quickly. She’s hit puberty early and even though her capability and maturity levels are consistent with a 7-year-old child, I am having a hard time escaping one simple fact: It won’t be long until my child with autism will soon be an adult with autism.

Of course, I’ve known this and I have always known this. But now it is seeming less and less like some faraway thing. With every passing week, as I watch my daughter develop breasts and hips, as shopping in the child’s clothing section has become a forgone conclusion, that thing, once seemingly light years away, is now just a few exits down the highway that we’re traveling on.

This morning I sat down to watch this past week’s episode of
Parenthood. A lot of autistic parents are mixed on the way they view Parenthood and how they depict a family with an autistic child. I am not here to debate how authentic the show is. As the parent of an autistic child, Parenthood feels close to home, in both good ways and bad ways for us, and often awakens those problems and joys which are all too familiar.

Like my daughter, Max, the character on the show with Asperger’s, is getting older and his parents are starting to think about what the future looks like for him. Like my husband and I, we both have a lot of hope for our daughter, but also a lot of fear about her future, her capabilities, and what life as an adult may look like for her.

My daughter doesn’t yet know she is autistic, but one day, probably fairly soon, she will. One day she may see the look in other children and adult’s eyes. She may see that look of ridicule and rejection of people who just write her off as being weird. That look that fills me with such sadness and heartbreak for her. I think the only thing more heartbreaking will be when she sees that look herself and realizes what it means, and that unlike a scraped knee or a stomach ache, I cannot make it all better for her.

As if all that wasn’t enough, we have to think about things like whether or not she will be able to support herself when she gets older. Will she be able to live independently? I don’t care if she lives with us forever, but what happens to her when her dad and I are gone? Most importantly, will she find love and people around her who care for her and who will be there for her?

Let’s face it, while the media pounds us with messages of hope for people with disabilities and there are some truly remarkable achievements going on out there, the number of high functioning people with autism who live either without support of some kind or without loneliness and isolation is not very high.

In my darkest moments I lament the fact that my husband and I didn’t try harder to have another baby. We tried for a while and gave up, both of us slightly older parents and feeling incredibly lucky that we had our beautiful, sweet girl. We just felt so complete as we were, just us three. So we tried, and when it didn’t happen after a couple of months, we changed our minds.

Most of the time I don’t regret that decision, but in my scary place, I worry that we condemned her to a lonely life by not trying harder to give her a brother and a sister. I think about how I would probably have some peace of mind knowing that she had someone to look out for her, so that we would not leave her alone. My rational self tells me that is not nearly enough of a reason to have another child and I am thankful that my husband and I made the decision before our daughter was diagnosed, because we did make the right decision for us.

The fact that my husband and I made the right decision unfortunately doesn’t provide me much comfort in terms of my daughter’s future.

Then, I think of all the parents I know who are raising typically developing kids. While everyday life for them may not require the planning, thought, and worry that mine does, their children’s futures are not assured either. Just because their scope of opportunities is greater doesn’t mean that they will end up fulfilled and content. Being able to pay your own bills and live independently isn’t a guarantee of anything.

I am reminded again of a lesson which took me decades to learn–happiness is not a reward for being good. It’s a choice.

So, while my daughter’s future is and remains very uncertain and out of my control, my daughter is a happy, joyful, and contented kid. I didn’t make her that way, she chose that all on her own.

May she continue to do so. 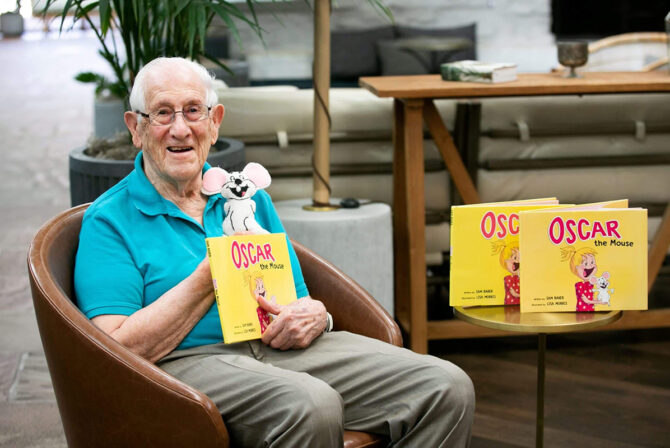 In His 90s, This Jewish WWII Vet Embarked On a New Career: Writing Children’s Books

6 Fun & Easy Ways to Remove Wax from Your Menorah