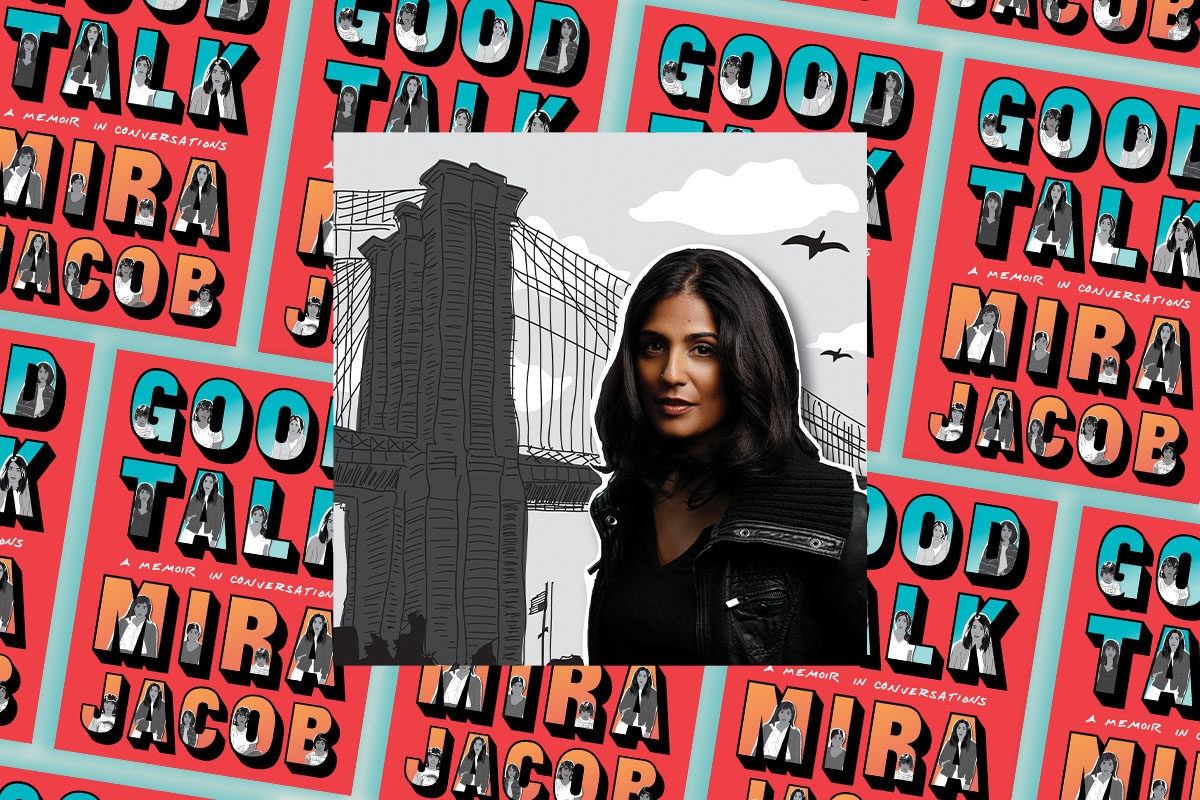 “Terrifying,” is the adjective writer Mira Jacob uses to describe raising a half Indian, half Jewish son in Trump’s America in 2019.

Her new memoir, Good Talk: A Memoir in Conversations, is about her experiences growing up the daughter of Indian immigrants in Albuquerque, about raising her son, and what happened when she discovered her Jewish in-laws were ardent supporters of Trump.

Kveller spoke with Mira about her family’s reaction to her book, how parents can answer difficult questions, and why she hopes people don’t project their hopes for the future of the country onto her.

Good Talk is based off a piece you wrote for BuzzFeed, which was a conversation with your son. The memoir, however, includes conversations with many more people. Why did you expand the scope?

I had the idea for the book before that particular BuzzFeed piece. I wasn’t sure what it was going to look like. Immediately, when I was doing that Michael Jackson piece, I thought of five other conversations in my life that were similar from my childhood, so I knew they were going to work together somehow. I wasn’t sure exactly how. And then what I didn’t know — ’cause I pitched the book in 2015 — I didn’t know how much worse it was going to get.

And, something about [the election] really put a sort of clarifying lens on which conversations I needed to amplify and which ones were haunting me. I knew I had to figure out a way to talk about the formation of my identity, because I understood [my son’s] was forming right in that moment. There were circles to what he was going through and to what I had gone through, and I had never seen them talked about in America.

You know what’s weird? When you write something that you are sure will only hit home with the people in your actual living room and suddenly you’ve got strangers jumping into your DMs to say, “This is me, this is my family, too.” After the Buzzfeed piece went out, it wasn’t just Indians reaching out, or even Indians who had married Jews and given birth to dancing unibrows. It was every kind of person unsure of how to talk about their experience in a country that still defines itself in terms of whiteness and all others. (It was a lot of us.) I started drawing members of my family and plopping them onto magazine covers, kitchen counters, and picnic tablecloths to tell the stories I’d heard all my life. (Pictured: my mother.) I got to thinking about what a book of drawn conversations might look like. I made a 100 page proposal of what a book of drawn conversations might look like, and Random House bought it. It would be funny, my editor and I thought. Or my kind of funny, which is the kind that makes people say things like, “How are you doing *really*?” and grip your arm too tightly at the party. (7 of 20) #goodtalkthanks

What about your husband, Jed?

Jed is a documentary filmmaker, so he’s an artist in his own right. And we had a million discussions about this book as it was happening. It was really hard; it was hard because I was making something I was scared of, and I was scared of what I was saying, who it was going to hurt, and I was more scared than anything of what would happen if I didn’t make it.

What about your in-laws?

What advice do you have for navigating families with vastly different political ideologies?

Oof, boy. It’s so hard, because I don’t have advice, honestly.  I understand why people would want it. I don’t actually have advice because I think it’s so individual. As much as I made my choices, I could absolutely understand a mother in my position who’s like, “That’s it. I’m done. I’m not having a relationship with these people. I can’t take it. I don’t want my son around that.” I get that. So I would never judge that. Nor would I advise someone not to do the thing that is right and protective for themselves and their child. I just wouldn’t.

Terrifying. He said to me, “Is it extra bad that I’m brown and I’m Jewish, cause those are two things no one likes?” I felt like dying.

What advice do you have for parents when they’re asked these types of questions?

The one that I stick to: answer the questions you’re asked. Sometimes, you can go to a very grown up and very sad place very quickly with a really simple question, so I really try to hold myself back from explaining more than my son has asked. I try to ask a lot of questions back, so that I can understand what his concern is.

I think a lot of people see themselves reflected back in your family. They almost want your reassurance — is my family going to be OK?

Exactly! And I think that’s what they’re really asking. And so I think I’ve been sort of saying, “I think you’re asking me if your family’s going to be OK, and I can’t answer that.” I don’t know that. But I can tell you the things I’ve done to make sure me and my son are OK, and my husband. I can tell you the things I’ve done for the three of us to try to shore up what it looks like in a mixed-race family in an America where everything is fighting against you.

Good Talk: A Memoir in Conversations is out March 26. This interview has been lightly edited and condensed.