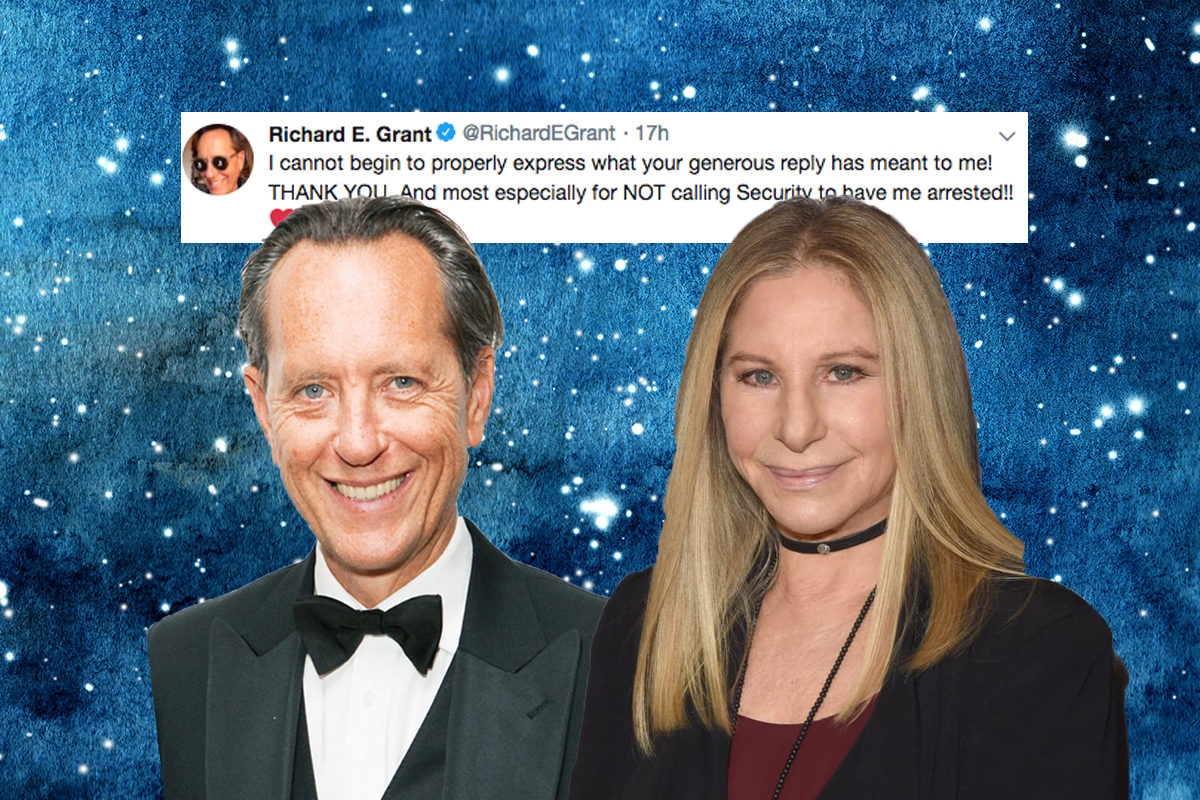 As a 14-year-old, actor Richard E. Grant wrote a note to Barbra Streisand.

Grant, who is now 61 and is nominated for an Oscar for his role in  Can You Ever Forgive Me?, shared the message to his Twitter on January 29th.

“You don’t know me yet,” Grant wrote in 1972, “but I am writing to offer you an idea you might like to consider. My name is Richard and I live in a small African kingdom called Swaziland in south-east Africa.”

He tells Babs that since he and his family saw Funny Girl, he has been a “very big” fan, following her career and purchasing all her records.

“I read in the paper you were feeling very tired and pressurized by your fame and failed romance with Mr. Ryan O’Neal,” Grant writes. (Streisand and O’Neal were an item sometime during the filming of their 1972 film, What’s Up Doc?)

Young Grant’s fabulous idea? “I would like to offer you a two-week holiday, or longer, at our house, which is very beautiful with a pool and a magnificent view of the Ezulwini Valley.”

Grant tweeted the decades-old letter, along with a recent selfie of himself outside Streisand’s home. (He asked security for permission, obviously.)

As a lifelong fan of someone you’ll understand what it meant for me to take this snap outside the home of @BarbraStreisand Asked Security for permission & he replied ‘It’s a public road, but thanks for asking’ Wrote her this letter when I was 14. My wife is very understanding! pic.twitter.com/3SohXKpgZT

And you won’t believe what happens next! Streisand goes to Swaziland!

“Dear Richard,” she tweeted back. “What a wonderful letter you wrote me when u were 14 ! and look at u now! You’re terrific in your latest movie with Melissa congratulations and love Barbra.”

Grant’s touching response to Streisand’s tweet? He was completely verklempt.

He wrote, “I cannot begin to properly express what your generous reply has meant to me! THANK YOU. And most especially for NOT calling Security to have me arrested!! ❤️❤️❤️❤️❤️❤️” (Yes, those are six red heart emojis at the end of his message.)

He then tweeted a collage of her tweet, and an image of him “overcome with emotion.”

My pal Nicole Wilcox took this photo as my daughter read me @BarbraStreisand ‘s tweet/response to a letter I sent her 47 yrs ago. Am completely crinkle faced & overcome with emotion. My ‘Message in a bottle’ miracle. 😭😍😇 pic.twitter.com/bJMko098we

We are anxiously awaiting the day they’ll finally meet.