18 Kitschy Gifts for Your Jewish Dad 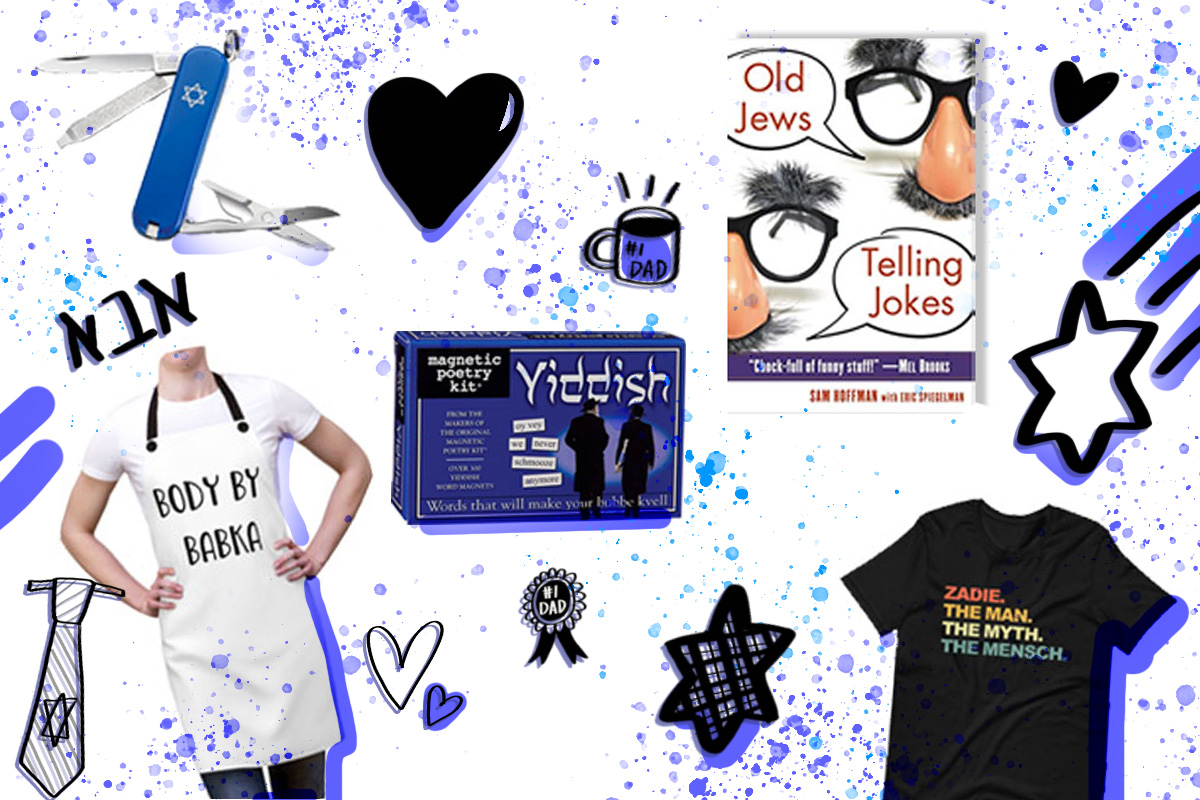 A lot of us have complicated feelings about Father’s Day — whether we have complex relationships with our own dads or just, you know, are irked by the fact that even now, in 2022, the division of labor at home, both physical and emotional, still isn’t quite where we’d want it to be. Should Father’s Day even be a thing? I don’t know.

But one thing I do know is that I have a lot of Jewish dads in my life that I genuinely love. Also, Jewish dads — and yes, I know, this may be an overgeneralization, but at least from my own anecdotal experience — love Jewish kitsch. My lovely Jewish husband was just waiting to become a dad so he could let loose every single Jewish dad joke in his head.  And so, in honor of the corny Jewish dads in all of our lives, I’ve assembled a list of kitschy Jewish objects for the Jewish dad (or “jaddy,” as Brett Gelman calls him) in your life.

These items range from super kitschy to kind of cool, and I might secretly want all of them? While they may not get shipped in time for father’s day, a fashionably late gift is still a gift. Also, who needs an excuse to celebrate the adorable Jewish dads we love? No one!

This list uses he/him pronouns for the Jewish dads in your life, but I see you, Jewish dads who use they/them and other pronouns — this list is just as much for you, and for anyone who feels like a Jewish dad.

We love a good dad shirt — and hey, it’s not just for dads. And because my husband is a very svelte Jewish man, I often have to buy my own kitschy Jewish shirts.

Yo Semite from Modern Tribe

This is the classic Jewish dad shirt. I will accept no arguments. Thank you.

That’s “kiss my a**” in Yiddish — for the sassy Jewish dad you love.

The zadie, the man, the myth, the mensch shirt from Etsy

This shirt is the height of macho kitsch for the Yiddish-loving Jewish grandpa.

For the stoner dad in your life!

I don’t know about your Jewish dad, but the Jewish dads in my life — both my lovely spouse and my own father — really love to cook. And what better place for kitsch then the kitsch….en. (Please kill me now.) Anyway, here are some funny Jewish aprons for the father in your life.

Body by Babka apron from Etsy

Hebrew king of the grill t-shirt from Etsy

3. A kitschy (or not so kitschy!) Jewish book

We are… the people of the book (I know), so a book is the ideal kitschy gift for a Jewish dad.

Books about/of Jewish jokes and humor: “Old Jews Telling Jokes”, “The Big Book of Jewish Humor”, “All About Me” by Mel Brooks

4. A kitschy gift for the dapper Jewish dad in your life

The Jewish dad in your life likes a good three-piece suit? We are here for it — let’s put a star of David on it, too!

Whether your Jewish dad wears a kippah all the time or just to synagogue and on special occasions, a novelty kippah is just a nice thing for him to have for a rainy day (or just, you know, for Purim?).

Spooky scary! Brains on your yarmulke!

This yarmakopter will have your dad flying high… cerebrally speaking, at least.

Keep your Jewish dad protected from the sun this summer with a kitschy Jewish hat.

Jewish dads need their coffees too! Here are some fun kitschy Jewish mugs for their daily caffeine dose(s). Or for herbal tea with a nighttime nosh.

How can you not love a kitschy figurine? Whether it’s for your dad’s office, bedside table or living room, it’ll be sure to get him smiling every time he looks at it.

Just look at this wee tiny challah! It’s so perfect and makes our hearts so full.

See above re: challah.

Yes, a Herzl figurine exists. Also a Ben Gurion one. They are so tiny but so serious!

This bobblehead will only ship in August, but I have a feeling some of you might know a Jewish dad who would appreciate it? The (Jewish-run) National Bobblehead Hall of Fame and Museum also has other Jewish and Jew-ish bobbleheads, like this Bernie Sanders one.

Aaaah, the gift sock. What an American holiday staple. But also, let’s face it, the Jewish dad in your life probably needs more socks — you know, for all the ones the washing machine in your house makes disappear and all the ones he still wears despite the holes in them.

Swiss Army knives have made for #Basic father’s gifts for time immemorial, and, apparently, there is this highly-rated one with a Jewish star on it on Amazon. Who am I to argue with the fact that this item exists and with the fact that maybe your Jewish dad would genuinely want one?

11. A kitschy gift for your queer Jewish dad

Celebrate Pride Month and the queer Jewish dad in your life with some kitschy Jewish items.

King David was bi and so am I pin from Etsy

Look me in the eye and tell me the Jewish bi dad in your life doesn’t deserve this pin!

If the queer Jewish dad doesn’t have a pride kippah, you need to get him one. I heard that is the law?

It’s been over a year, but we still can’t forget Marjorie Taylor Greene’s unhinged Jewish space laser post. If the Jewish dad in your life is also in that same boat, consider getting him a themed pin or shirt to advertise his Jewish space weaponry abilities.

What Jew doesn’t love a good fridge magnet? Especially one that helps them adhere their kids’ art and accomplishments to the fridge? Here are some fun ways for the Jewish dad in your life to spend even more time by the fridge — which, let’s face it, is the best place in the house.

There is nothing kitschier than getting your dad a card and nothing else for Father’s Day — and I love that very much. Here are some Jewish-themed ones that you can get, or that might inspire you to make your own (please send us pictures).

You are really a nice Jewish boy card from Etsy

15. A kitschy gift for your Star Wars-loving dad

Sigh, “Star Wars” themed gifts are a dad staple, and I suppose there is a reason for this, as many of the Jewish dads in my life do comfort-watch much of the franchise quite often. And yes, there are a few Jewish things about “Star Wars.” With that in mind, here are a few extremely kitschy Jewish “Star Wars” gifts for your dad.

Best Abba in the galaxy mug from Etsy

Festival of lightsabers t-shirt from Etsy

Guess Who? Seinfeld board game from Etsy

This is the best version of Guess Who? I’ve ever seen.

Jewish dads who miss “Seinfeld” love “Curb Your Enthusiasm” and Larry David. That is also another fact of life.

Do you respect wood? coaster from Etsy

18. A not-so-kitschy donation to a charity in your Jewish dad’s name

If your Jewish dad is a mensch, I’m sure he would appreciate if you would donate some chais in his name to a charity fighting for a cause that means a lot to him, from reproductive justice to Ukrainian refugees to whatever else he cares about.