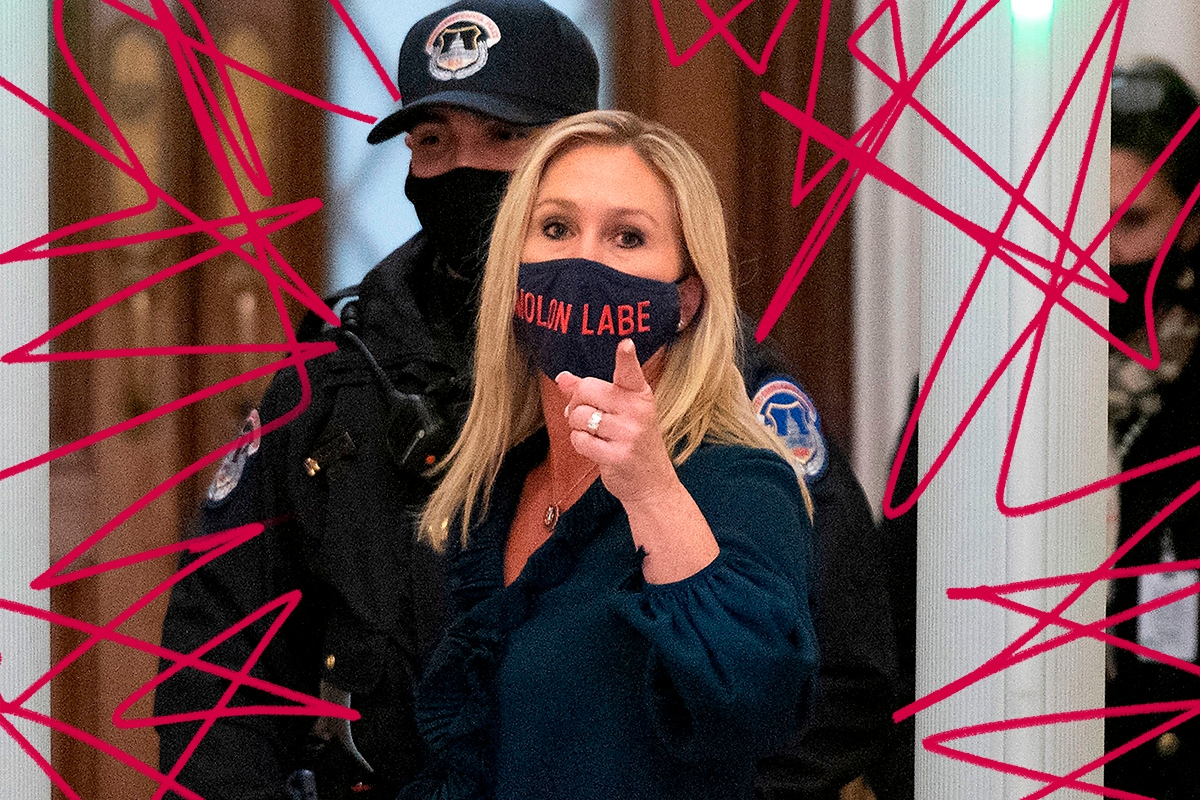 I’ve been watching the disturbing rise of conspiracy theorist and Georgia congresswoman Marjorie Taylor Greene with horror. Just yesterday, another baseless theory of hers was unearthed — about Jewish space lasers starting the California wildfires. (Did I ever think I’d be writing these words? About a congressperson, no less? No, dear reader, I did not. )

Here’s the story: On Thursday, a 2018 Facebook post written by Greene, who represents Georgia’s 14th district, was unveiled. In it, the future congresswoman blamed California’s wildfires on the Pacific Gas and Electric Company, in conjunction with the Rothschilds — the Jewish family that’s been prominently featured in antisemitic conspiracy theories for about two centuries. Apparently, according to the congresswoman, “Rothschild Inc” started the fires using a space laser, and their goal was to clear the way for a high-speed rail project.

You can read the entire, truly bonkers tirade on Media Matters. But also: if you value your brain in its current, unexploded state, maybe don’t.

Since the news broke, Jewish Twitter had a field day — because, of course! Making jokes out of virulent antisemitism has been our shtick for time immemorial. Humor, after all, is a classic Jewish coping mechanism. And this particular theory, well, it seems perfectly tailored for so many Jewish jokes. I mean, it’s like Mel Brooks‘ “Jews in Space” segment from History of the World: Part I has just been lying around for four decades, just waiting for this moment!

Also, it provided a great opportunity for some Lazar Wolf/Fiddler on the Roof references:

is this the space laser u guys have been talking about pic.twitter.com/baqSavugqp

The story also elicited a slew of Jewish mom jokes that were truly excellent. After all, if we actually had space lasers, would Jewish moms be able to not spill the beans about the amazing project their daughters were working on? Or would Jewish moms’  paranoia about lasers (and all things potentially lethal) lead them to push their kids away from such intergalactic endeavors?

This Jewish space laser thing makes no sense to me. Because, as every Jewish mother knows, you could put an eye out with that.

However imagine the Jewish mother whose son made said moon laser. Mine would be foaming at the mouth trying to tell her friends. https://t.co/7wCv8j7Fjq

Ok but for real anyone who thinks Jews are keeping a space laser a secret… have you met a Jewish mother? No one would ever hear the end of “did you know about my daughter’s space laser? We’re very proud!”

My Jewish mom was concerned the DVD player would blind us all when she found out it had a laser. So…#JewishSpaceLasers

I think the most absurd part of this absurd thing is that no Jewish mother would give up the opportunity to tell everyone that her son is working on the space laser pic.twitter.com/CCEHnPXKUm

So yes, the space laser jokes were good. (Also, as a Jew with an irrational fear of lasers — seriously, I would cover my eyes every time someone played with one of those laser pointers we all had for a while — I find them very relatable.)

This is something that I love about the Jewish people: We can “own” even the most virulent (and frankly, purely unhinged) antisemitism and make it into something delightful. But this isn’t just about having a good, cathartic laugh in the face of horror — although I do believe that’s a worthwhile endeavor. More than anything, these types of jokes are about putting a mirror to antisemites’ faces and demonstrating to them how laughable and hateful we think they are.

Yet, there is no denying that Greene’s words are very, very not funny. More than that: they are incredibly upsetting. Not just because these despicable beliefs are rampant across our nation — they have have now been elevated to one of the highest offices of the land.

As I said before, I’ve been upset about Greene’s politics for a while now. So when I heard of the latest unveiled conspiracy theory, I felt sad and scared — but not for a moment was I surprised.

You see, this 100 percent tracks with Greene’s many terrible beliefs that we already knew about; she’s a known supporter of many antisemitic and Islamophobic conspiracy theories. A recently resurfaced video shows her attacking Parkland survivor David Hogg and claiming that he is getting paid by George Soros — yet another popular modern antisemitic canard. Greene believes that the Parkland, Newtown, and Las Vegas shootings were staged. She also believes that 9/11 was an inside job, and that “former secretary of state Hillary Clinton murdered a child during a satanic ritual and drank her blood.” She is a supporter of QAnon — another trove of antisemitic conspiracy theories. Basically, she’s a callous bigot who hounds mass-shooting survivors, and I haven’t even made it to the part where she helped incite the deadly riots in the Capitol on January 6.

Is Greene a fluke? Or is she a harbinger of a new reality? Will the GOP rein her in, as Nancy Pelosi urged them to? Why are there so many tweets about her — and funny tweets, at that — and yet so few of her colleagues are calling her out for her dangerous ideas?

The fact is, antisemitism is on the rise in this country, and a lot of it is fueled by baseless theories like the ones Greene espouses. It’s a jarring dissonance that the state that elected its first Black and its first Jewish (Democratic) senators also gave us this, a reflection of the most dangerous forces in our country. Are Greene’s disturbing theories worthy of our mockery? Oh, yes. Yes, they are. But we should also not forget how heartbreaking and dangerous they are; the ideas that she peddles have been used to persecute us and other minorities for centuries.

As we laugh, we shouldn’t lose sight of what’s really at stake here.