7 Facts About Sukkot That Are Cause for Celebration 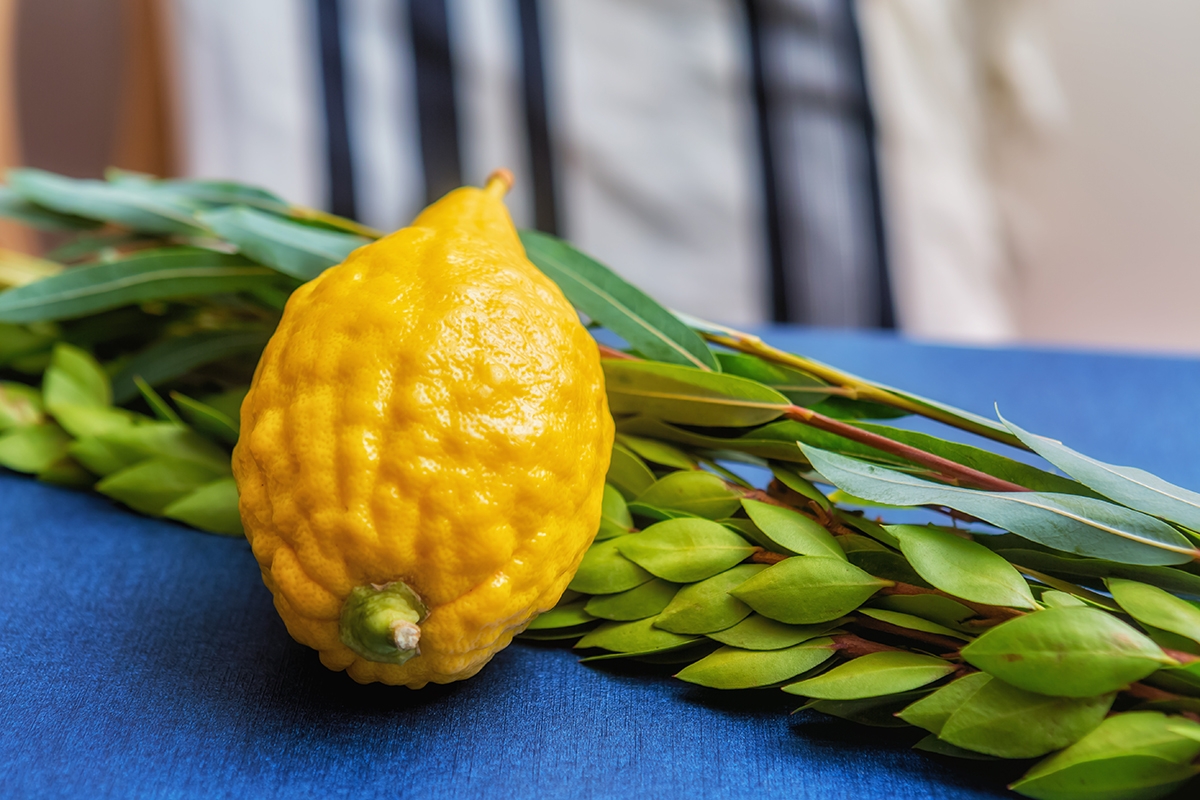 In case the last Jewish holiday, Yom Kippur, was a bit too solemn for your taste, well, chag sameach! It’s time to celebrate Sukkot! This biblical harvest holiday — which begins this year at sundown on October 9 —  is a fun and festive holiday. It’s also one of the three pilgrimage festivals, along with Passover and Shavuot… in other words, super important!

Sukkot, Hebrew for “booths,” is the plural form of sukkah, the temporary structures we build and dwell in for the entity of the weeklong holiday. Sukkot is the third of four very sacred holidays in the Hebrew month of Tishrei, and is celebrated five days after Yom Kippur.

So, dust off your hammer, gather some stray branches, order a pumpkin spice latte and enjoy these fruitful facts about this ancient holiday.

1. Sukkahs are built to resemble the small huts the Israelites used as shelter while wandering the desert for 40 years!

Think of it like this: Sukkahs are early versions of our modern camping tents. After God performed marvels and miracles in Egypt and freed the Israelites from bondage, the Israelites built sturdy but non-permanent structures that were “easily” transportable (though that’s probably dependent on whom you asked!) and sheltered in them throughout their 40-year journey to the Land of Israel. In commemoration of this gigantic schlep, we build sukkahs and give thanks to God for our many blessings of freedom and abundance.

Just how does one build a sukkah? I’m so glad you asked:

2. There are numerous rules one must follow when building a sukkah.

The rules and regulations are described in detail in the Shulchan Aruch, a foremost compilation of Jewish laws by Joseph Karo in the mid 16th century, and are as follows: The sukkah structure must be sturdy and not blow away.  It’s only required to have 2 ½ walls, provide over fifty percent shade and can be made of any material — except the roof, which must be made of a natural substance that was once alive but is no longer. Sounds simple, right? Wait, I’m not done: The sukkah cannot exceed 30 feet although it has a minimum volume of exactly 27” x 27” x 38” and one must be able to see the stars through the roof.

I know what you’re thinking: Is this an SAT word problem? It’s actually easier to construct a kosher sukkah than described and one can be quite creative and artistic in their design. Check out these breathtaking sukkahs exhibited by famous artists in New York City in 2010. The possibilities are endless!

3. Eating and sleeping in the sukkah is required(ish) for adult males.

During Sukkot, the sukkah is treated and respected as one’s home: a place to eat, sleep and dwell. This gets a little tricky, however, when weather, animals and other naturally occurring conditions disturb one’s comfort. According to the Shulchan Aruch, adult males are required to eat and sleep in the sukkah, in most circumstances. But, like all great Jewish scenarios, what determines enough discomfort to exempt one from his obligation?

Well, here’s one scenario: If one were to bring a pot of beans to eat in his sukkah and was worried that the quantity of rain drops would spoil his supper, one could eat (and sleep) in his house. Another way to measure? If one were standing in an indoor room, and so much water fell from the ceiling that one would relocate to a different room, the same holds true for the sukkah. Similar reasoning is taken into consideration with regards to critters, odors and bandits (oh my!) and other unsafe conditions.

It must be noted that women, children and those who were unwell are exempt from sleeping in the sukkah. (Of course, if a seven-night campout with your family sounds fun, then by all means, go for it!)

4. It is a mitzvah to host both supernatural and physical guests in the sukkah!

Growing up, my sisters and I always looked forward to building our family sukkah on our porch every year. We had a different family come for dinner each night (yes, my parents are superheroes) which I just thought was awesome, but it is actually commanded. In Judaism, guests are synonymous with joy, and while gathering is encouraged year-round, guests are particularly special when celebrating festivals. This mitzvah of hosting is interpreted from Torah in Deuteronomy 16:14.

During a pandemic, fulfilling this mitzvah can be a little more difficult, but… fear not! There is a safe option: Ushpizin, which is Aramatic for “guests,” refers to seven Jewish biblical figures who spiritually visit us in our sukkah, a different one for each day. According to the Zohar, Kabbalistic writings compiled in the 2nd century CE, each distinguished guest is commemorated for his specific attributes. They are known as the “seven shepherds of Israel”: Abraham, Isaac, Jacob, Moses, Aaron, Joseph and David. It is always a pleasure to host biblical guests — I have yet to hear one complaint!

5. The lulav (sacred arrangement of branches) and etrog (a citrus fruit) are needed to celebrate Sukkot, and each hold sacred symbolism.

The lulav, which is named after its long (and sharp — watch out!) palm branch, is composed of three different plants that, when united with an etrog, a fragrant citrus fruit, are known as the Four Species. Attached to the lulav are hadas (myrtle) leaves and aravah (willow) branches. The Four Species are described in the third book of the Torah, in Leviticus 23:40. The lulav and etrog are blessed and shaken in the sukkah in the morning hours of each of the seven days of Sukkot.

An extra layer of holiness is added to this mitzvah in that each of the Four Species represents a different part of the human body: Myrtle leaves resemble the eyes, willow denotes the lips and the palm branch signifies the spine. The etrog symbolizes the heart.

The most important part of the etrog is the pitom (stem). If the pitom is detached, it is considered not kosher. We must be very careful to handle the etrog; just as we must protect our own hearts… Either that, or they just wanted a fantastic excuse to sell those beautiful (and expensive) etrog boxes!

6. There’s an art to shaking the lulav and etrog.

There is intricate choreography one must follow to properly shake the lulav and etrog; each step is filled with sacredness. We first recite the blessing, holding the lulav and etrog together, and the pitom of the etrog must be pointed down. Then, facing east, we then tilt the pitom upwards and shake them together three times in each of six directions, beginning with east, then south, west, north, up and down. Although there are numerous interpretations behind the symbolism of this choreography, the most noted is the representation that God’s presence is continually all around us. Check out this beautiful video by Rabbi Sari Laufer for step-by-step instructions!

7. The last day(s) of Sukkot are celebrated very differently depending on where you live.

It is undisputed that Sukkot is a seven-day holiday that  begins on the 15th of Tishrei and lasts until the evening of the 21st of Tishrei, as can be found in the Torah. It is what happens on the following day that is commemorated differently whether you live in Israel or elsewhere.

In Israel, the day after Sukkot is celebrated as a sacred holiday (yom tov) with restrictions similar to those observed on Shabbat. It is most often referred to as Simchat Torah, “Rejoicing in Torah,” but religiously and biblically known as Shemini Atzeret, “Eighth Day of Assembly.” Observant Israelis recite a prayer for rain and yizkor (a public prayer for remembering those no longer with us). Then, they jubilantly celebrate the completion of the Torah reading and immediately start reading the Torah from the beginning! Phew, that sounds like a very busy day!

In the Diaspora (Jews living outside of Israel), Shemini Atzeret is celebrated the day after Sukkot ends, and Simchat Torah gets its own separate day! Shemini Atzeret is observed in synagogue, complete with praying for rain (not for us, but for Israel) and the reciting of yizkor. Simchat Torah is celebrated the following day by dancing and singing with the Torah, as we end the very last verses from the final book of Deuteronomy and in the same breath, begin chanting the first verses in Genesis. Religious children rejoice in that both days are yom tov, which basically means no school!

Well, I better get to it! There’s a very regulated sukkah to be built and spiritual guests to host… Wishing your family the most wonderful holiday and a bounty of blessings ahead! Chag sameach!