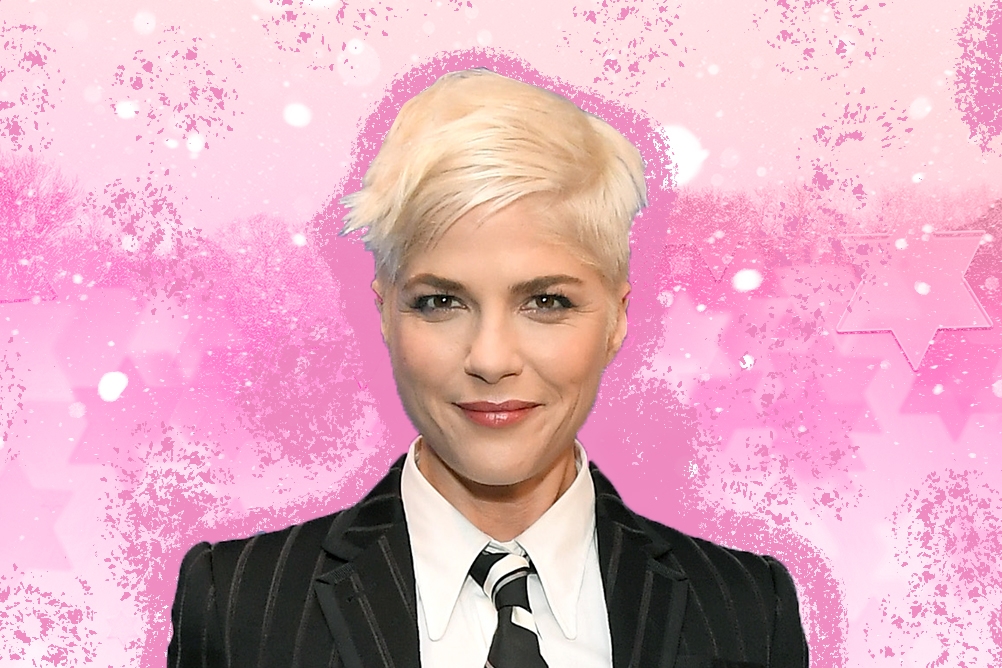 “The role of Judaism in my family was a tricky thing,” actress, activist and Jewish mom Selma Blair writes in her extremely excellent memoir “Mean Baby.” And yes, she eventually acknowledges “I am and always will be Jewish.”

The book is a heartfelt, trippy, beautifully spun journey through the film and TV star’s life, who is well-known for her role in the cult film “Cruel Intentions,” the “Hellboy” franchise, and shows like “Anger Management” and “American Crime Story.”

It starts with her troubled childhood, navigating her journey with the labels she was given as a child and even a baby. It chronicles her grappling with the early signs of her multiple sclerosis and later in life diagnosis, recounts her struggles with alcoholism and details the joys and struggles of parenthood with her son, Arthur Saint Blake. There are crystals, mystics and an entire chapter dedicated to Selma’s habit of awkwardly biting people — but it’s just as profound as it is quirky.

The book is surprisingly Jewish. Blair’s father, attorney Elliot Beitner, was Jewish. He and her mother divorced when Selma was 23, and she decided to relinquish his last name. Blair’s mother, whose father was Jewish and whose mother was Anglican, had a complex relationship with Judaism. Blair recalls that her mother would tell her “that I need to be Jewish,” while simultaneously saying “that I could never be [a Jew]”.

Here are nine Jewish facts about the incredible actress taken from “Mean Baby,” which you should absolutely read — though I highly recommend you listen to the audiobook version because Blair brings one hell of a dramatic performance to it. Seriously, make sure you sure you listen with a box of tissues readily available.

She was named according to Ashkenazi Jewish tradition

In the book, Blair recounts that she didn’t have a name for the first few years of her life. She was nicknamed Blair Moody, after a U.S. senator her mother, a judge, loved.

In the end, Blair’s mother named her Selma after a friend who passed away around the time she was born — “in the Jewish tradition babies are never named after a living person,” she writes in the book. (She also laments that she was almost called Gwyneth, but her mother decided against it.) Selma’s Hebrew name is Bat-Sheva.

Her family escaped the pogroms

Blair says she inherited her love for writing from her Jewish pop pop — her mother’s father. He was born in Kyiv, where his fashionable father had a successful tailoring business. But when the pogroms began, Blair’s great-grandfather moved his family to America. Her grandfather was only 2 at the time. Despite the fact that pop pop was not religious and considered himself an American more than a Jew, Blair writes that he spoke fluent Yiddish.

Blair and two of her sisters went to Hillel day school

Blair and two of her older sisters attended the local Hillel day school. It was both convenient and a way to honor Blair’s father’s Jewish heritage. The curriculum included Talmud study and prayer every morning. While Blair’s family wasn’t very observant before, she said that after joining Hillel they “opposite of Anne Frank-ed;” no longer eating ham and keeping two sets of dishes (that weren’t actually kosher). Blair recalls celebrating Hanukkah and fasting on Yom Kippur — even her mother, who was ambivalent about Judaism, observed and fasted on the holiday.

She went to the mikveh with an eye patch

Selma Blair converted to Judaism officially in second grade, along with her sister Katie who was about to be bat mitzvah-ed. Blair wore an eye patch at the time to treat her lazy eye, which her optometrist, Dr. Lerner, told her never to remove (she didn’t for two whole years). While she agreed to remove all of her clothes and jewelry “in the salmon-colored tiled mikveh,” she refused to remove the eye patch. And even though the mikveh attendant told her her conversion would not be legal if she didn’t take it off, her rabbi, who was also the school rabbi, let it slide.

Her favorite biblical phrase as a child was “vayehi or!”

As a child, Blair had a fondness for proclaiming “vayehi or” — let there be light, the line from the story of creation in the book of Genesis. She would yell it every time she woke up her sister Lizzie by opening the blinds in their room, and also when her eye patch was finally removed after two years.

The first time she got drunk was at a Passover seder

Blair recalls loving Passover, reading the Haggadah and the rituals of the seder. Every year her family would let the kids drink a small amount of Manischewitz for each glass. She recalls that at seders “I felt warm, at one with my ancestors,” but at age 7 she realized that the feeling “wasn’t spiritual it was scientific.” Blair was incredibly disappointed by this — “I got drunk that night. Very drunk,” she recalls. Blair later talks about her struggles with alcoholism.

She claims in the book that she still remembers Passover every year, but she never serves Manischewitz.

“Anne was my glorified shadow, trapped, and optimistic,” Blair writes in the book, even though she “couldn’t wrap my head around what had befallen her.” She loved her depth and the fact that she “was a secular Jew who wrestled with God,” like Blair did. Blair resonated with the experience of feeling trapped, and the fact that she fought with her mother and was worried about being a bad person.

In 2010, she narrated the Random House new edition of Anne Frank’s diary. Blair said the experience had her completely overcome with emotion and at first she felt like her reading was “hollow.” Eventually, Blair found her, or rather Frank’s, voice. She was nominated for the Grammy Award for Best Spoken Word Album for Children for the audiobook.

Dr. Lerner, who diagnosed Blair’s lazy eye when she was a kid and made her wear an eye patch (though it didn’t really retrain her brain, unfortunately), was the one who first suggested the actress had MS when she was 22, decades before her official diagnosis. “The interesting thing is you have optical neuritis… it’s usually a symptom of MS. Multiple sclerosis,” he told her back then.

She wanted to put a stone on Carrie Fisher’s grave

Blair recalls meeting Carrie Fisher after being invited to her birthday party with her then-boyfriend actor Jason Schwartzmann. Fisher became a sort of surrogate parental figure for her, even though they never worked together. Blair would go and hang out at Fisher’s house while she wrote in bed (Blair said she later adopted this habit of writing in bed, thanks to Fisher).

When Fisher unexpectedly died in 2016, Blair said she wanted to put a stone, specifically a heart-shaped crystal, on her grave — “we both have Jewish fathers, and that’s what Jews do,” she writes.