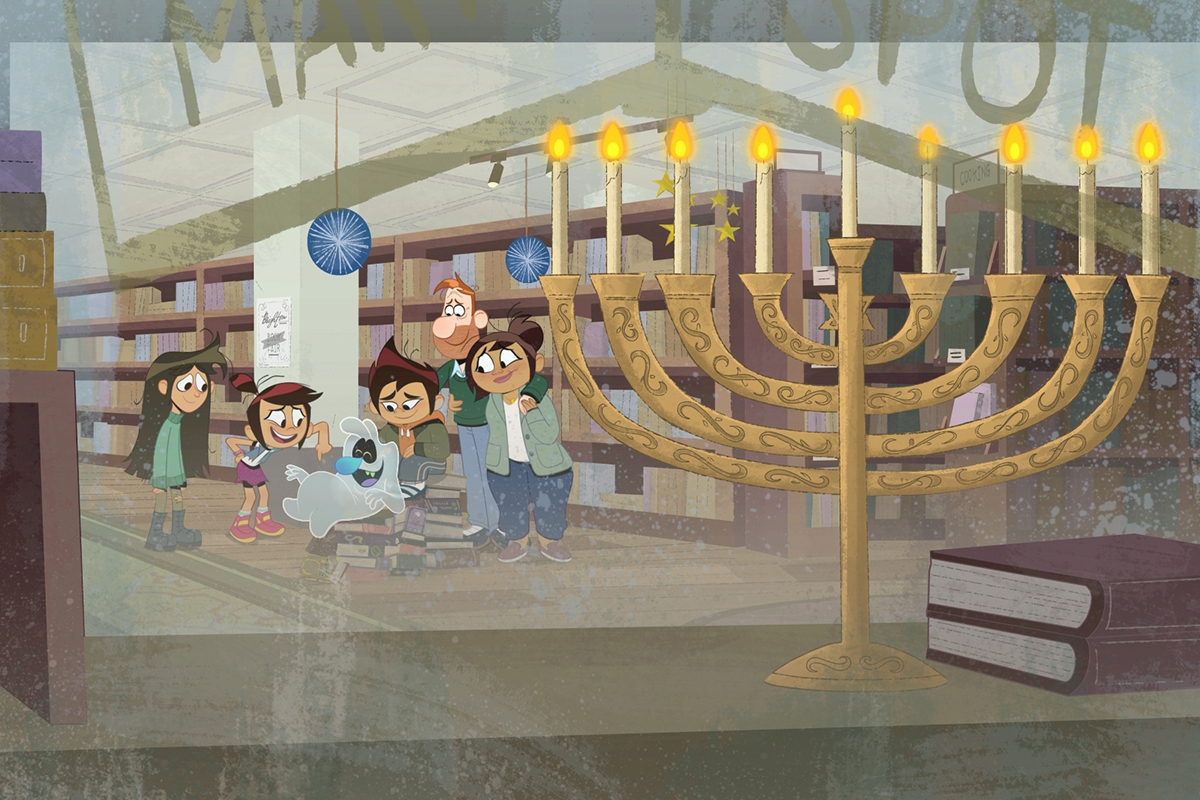 “The Ghost and Molly McGee” is quickly becoming one of the best family shows on the air for Jewish representation. First, the Disney Channel animated show gave us an authentic portrayal of a bat mitzvah. And now, the writers have taken similar care with the Hanukkah episode, “Festival of Lights,” which premieres on November 27, the day before the first night of Hanukkah — and it’s the perfect way to get your family into the spirit of the holiday.

A quick refresher: Molly McGee and her family move to the small Midwestern town of Brighton where she finds a ghost, Scratch, in her attic. After a backfired curse forces them to spend all of their time together, they become best friends. Molly, with her relentless optimism, is constantly trying “enhappify” the residents of the economically struggling Brighton. And in “Festival of Lights,” the magic of Hanukkah helps bring neighbors together.

In this episode, the McGees go to the Stein-Torres bookstore, Book Marks the Spot, to celebrate the eighth night of Hanukkah when a citywide blackout causes the power to go out. Ms. Stein-Torres, the mom of Molly’s human best friend Libby, has a generator, but she forgot to buy fuel and thinks she only has enough to keep the lights on for an hour. If you’re familiar with the story of Hanukkah, you might guess where this is going.

Here are eight reasons to love this episode (one for each night of Hanukkah):

1. There are no mentions of Christmas in this episode.

In our culture, people mistakenly think Hanukkah is the Jewish Christmas, even when it falls almost a month before Christmas as it does this year. Maybe part of the problem is that Hanukkah is usually shown on TV episodes as a small part of a larger Christmas story. Though “Festival of Lights” is paired with the heartwarming Christmas episode “Saving Christmas,” it’s a separate episode and viewers learn about Hanukkah as its own holiday, not in relation to Christmas.

2. Molly is eager to learn about Judaism.

In the bat mitzvah episode, Molly researches what it entails prior to the ceremony, and here she again takes the time to educate herself by looking up facts on her phone before getting to Book Marks the Spot. This is a great example for kids (and frankly, some adults) of how to respect other religions and cultures.

3. We get to hear the story of Hanukkah in a new way.

Not only does the episode itself mirror the Hanukkah story, but Libby shows off her slam poetry skills, which were established in an earlier talent show episode, as she tells how the oil in the Temple lasted eight nights.

4. There is so much appreciation for fried food.

Libby explains that we eat food fried in oil for Hanukkah, much to Scratch’s delight. He even has a song about how much he loves fried food that is relatable and educational, as Libby corrects his jelly donuts to sufganiyot and hash browns to latkes. Scratch calls Hanukkah the “most delicious holiday ever” and it’s difficult to argue with that.

5. There are dreidel lessons.

Besides a menorah (or hanukkiah, the term Libby correctly uses in this episode), a dreidel is probably the most common symbol associated with Hanukkah, but rarely do we see TV shows put in the effort to actually explain the game. Libby teaches Molly, her brother, Darryl, and Scratch how to play dreidel, explaining the Hebrew letters and what they mean. For example, when Molly lands on shin, she hopefully asks, “Shin as in win?” to which Libby responds, “Uh uh, as in put in.”

6. No one knows how to spell Hanukkah.

To pass the time, Libby hosts a Hanukkah spelling bee, the joke being that there are so many alternate spellings for the holiday’s name. Libby’s favorite is the one we use at Kveller. Good choice, Libby!

7. The episode depicts the way traditions connect us to our past.

When the rest of the townsfolk realize that Book Marks the Spot has the lights and heat on, they come over. We learn that there is another Jewish character in the town who was raised Jewish, but lost touch with that part of herself. Libby’s mother understands, and explains that her menorah has been passed down in her family for generations. There is a brief, beautiful sequence that impressively depicts so much of the history of Libby’s family, representative of the history of many American Jews. “No matter what happens, we celebrate that we’re still here, resilient, strong and proud,” Ms. Stein-Torres says. When there is still so much antisemitism in this country, it’s a powerful reminder.

8. It also teaches that you can make traditions your own.

The Stein-Torreses have their own Hanukkah tradition that we hope catches on — a miracle box where everyone writes down a miracle that happened to them that year. Then, everyone pulls a miracle out of the box and reads it aloud.

“The Ghost and Molly McGee” airs Saturdays at 9:00 a.m. on the Disney Channel. “Festival of Lights” premieres November 27. The first five episodes of the series are also available on Disney+.