A Teacher Made His Students Debate Hitler's Final Solution. What Happened Next Was Incredible. – Kveller
Skip to Content Skip to Footer

A Teacher Made His Students Debate Hitler’s Final Solution. What Happened Next Was Incredible. 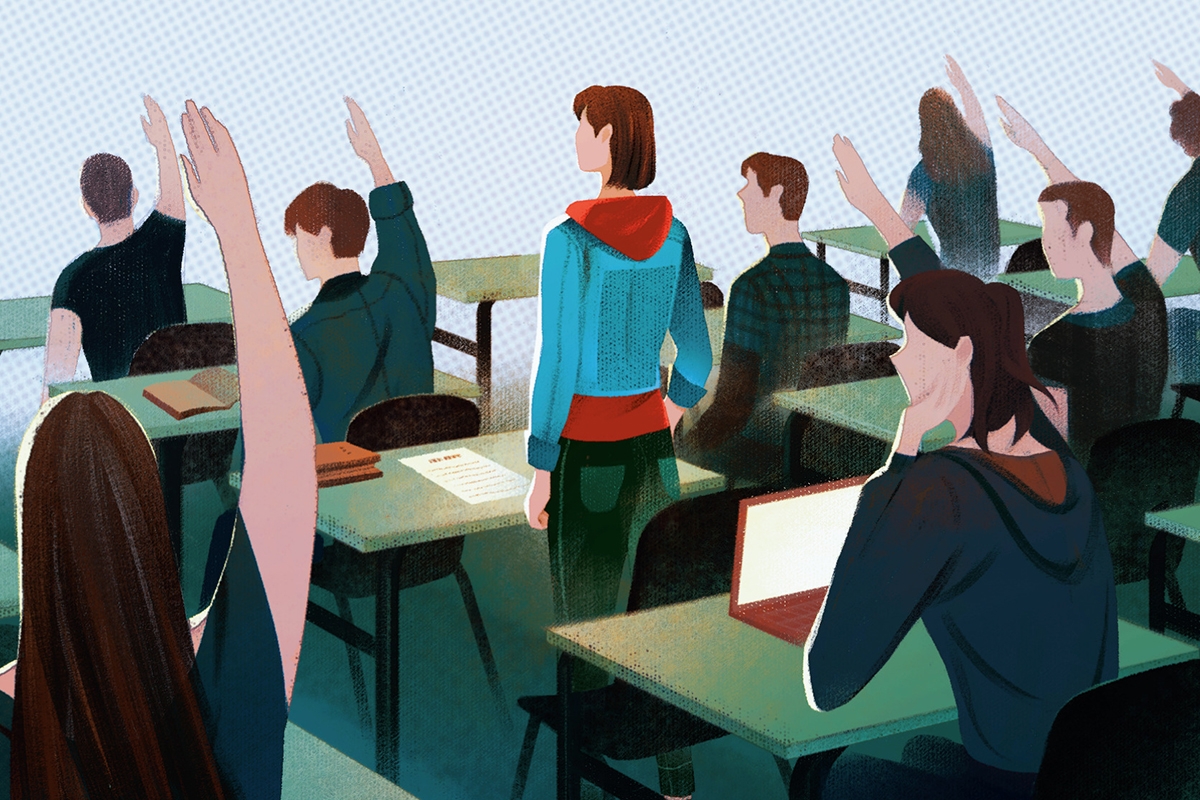 On January 20, 1942, 15 high-ranking officials from the Nazi party and the German government got together in a villa at Wannsee, a leafy suburb of Berlin. They were there to discuss the implementation of the “Final Solution of the Jewish Question” — the deportation and eventual extermination of Europe’s 11 million Jews.

The event was not a debate nor a chance for introspection. There were no brave moments of resistance. Instead, it was a group of Nazis, getting together in one room, and callously discussing the systematic murder of Jews.

Seventy-five years later, in 2017, in the town of Oswego, New York, during a college-level English class at the Center for Instruction, Technology, and Innovation, a teacher asked his students to imagine being one of these Nazis. In a jaw-dropping fashion, he asked his students to argue for, or against, the Final Solution.

Two of the students in that class — which was overwhelmingly white and not Jewish — spoke out and pointed out the tastelessness of the assignment. Their names were Archer Shurtliff and Jordan April. As Shurtliff told Oswego County News Now, he understood where the assignment was coming from, but he found it unacceptable: “You can play the devil’s advocate,” he said, “but you can’t be the devil.”

The teacher brushed off the students’ criticism, and eventually, the school administration offered them an alternative assignment — but didn’t cancel the first one. Even the New York Education Commissioner, MaryEllen Elia, when first asked about it, claimed that it was an exercise in “critical thinking.”

But Shurtliff and April weren’t having it. They took their fight to the media and to the ADL — and eventually, they won. Elia agreed to make sure the assignment was never given again in New York State.

Coincidentally, as this story broke, Milwaukee-based author Liza Wiemer was on her way to Oswego, heading to a bookstore to give a talk about her YA book, Hello? As she sat in her car, waiting out a downpour, she read the story of these two brave teens, which was posted on Facebook by her aunt. The Jewish author and mother of two felt like she had to meet them.

Incredibly, as she walked into the venue of her reading, she saw a face she recognized: Jordan April. She worked at the bookstore.

That night, Wiemer spoke to both teens on the phone. Astounded by their tenacity and bravery, she decided their story had to be put to paper. “I knew immediately that I was going to fictionalize this story,” she tells Kveller over e-mail. “From the start, this book wasn’t meant to be about the real teens, but a broad view of the impact an assignment like this has on students, a class, a school, a community, and even the world.”

The result is The Assignment, which was published this summer by Delacorte Press. It is a riveting emotional read, and an urgent one. It tells the story of two teens, Cade and Logan, who stand up against a similar assignment, in a school that is all-white and non-Jewish: “a reflection of the schools the real teens attended, and one that I visited in the area,” Wiemer explains.

It’s a page-turner that explores the points of view of Cade, Logan, and the other students in the class. The book demonstrates how teachers can inadvertently water the already-existing seeds of intolerance in student’s hearts — thanks to assignments like this one, and, as Wiemer mentions in the book’s acknowledgments, similar ones across the country.

At a time when antisemitism and intolerance are rising in this country when white supremacist organizations and conspiracy theorists are receiving encouragement from those in higher office, The Assignment is a reminder of the responsibility we all have to call out injustice wherever we see it.

This must-read book is also a tale about identity, love, and loyalty. The way the families of these fictional teens stand behind them shows how much we can accomplish by encouraging our kids to fight for what’s right — even if it comes at a personal cost.

I spoke to Wiemer about how her Jewish identity influenced the writing of the book, how her 20-plus years of teaching experience helped shaped it, and what she hopes readers will take from it.

How did your experience growing up as Jewish in non-Jewish spaces influenced writing this book?

Writing this novel brought back memories of antisemitic incidents I experienced in my youth. Some took place out of ignorance and some from deep-seated beliefs. I drew upon those emotions — the fear, feeling like an outsider in my own school and community — and utilized them as motivation to show the impact of antisemitism and all forms of hate on society.

There’s empathy in this book for Mr. Bartley, the teacher who created this ill-conceived assignment. Why did you feel it was important to show his perspective?

Before I wrote one word, it was critical for me to understand Mr. Bartley and his motivations for giving his students this assignment. I decided to challenge myself, imagining him as a favorite teacher. But then I had to ask myself how a beloved teacher could give an assignment that crossed a moral line. I drew upon my educational background, digging deep to figure out his whys.

In similar situations, educators have often been villainized in the media and online. We rarely get background on these teachers. Based on the comments I read, people made quick judgments that often were damaging and damning. I saw Mr. Bartley’s actions as misguided and thoughtless — he had no nefarious motivations. For me, portraying him as a multi-dimensional and authentic individual was critical.

How has writing and researching this story changed your own perspective as an educator?

Good teachers make mistakes. I am much more aware of the lasting impact these assignments have, as well as the challenging dynamics they cause in and outside the classroom. It’s made me realize how critical it is for us to foster educational environments where upstanders are respected and welcomed. We must encourage students to speak up against injustice and support their actions instead of feeling threatened by them and attempting to suppress their voices.

You talk at the end of the book about how embracing your Jewish identity and also sometimes want to hide, in order to protect yourself — that’s such a common struggle for Jews in the diaspora. As a mom, how did you reconcile fostering Jewish pride in your kids while also trying to keep them safe?

Creating a Jewish life in and outside our home for our children was very important to my husband and me. We made decisions early on that weren’t easy. It was a conscious decision to keep kosher and Shabbat and to build a love for Judaism within our home. The more we became involved in Jewish life, the more we saw how those experiences created joy, stability, pride, a strong sense of identity, and community for our sons. But with all the positives, antisemitism continues to be a thick, heavy blanket that has weighed on us.

One particular incident was frightening. Once, when we were walking to our synagogue on Yom Kippur with our rabbi and rebbetzin, a car slowed. The passenger window rolled down, a soda can was thrown, and it exploded by us. As the car squealed away, one of the men inside yelled, “Heil Hitler!” It left a mark.

For us, as parents, the answer was to strengthen our community and to make sure that the best safety measures were in place. We didn’t shy away from having difficult conversations with our boys and answering their questions. At the same time, we made absolutely certain to fill our home with a love of Judaism…  As Dennis Prager and Joseph Telushkin explained in Why the Jews: The Reason for Antisemitism, learning and strengthening our Jewish identity are critical and powerful tools to combating hate. Hate can’t win. It can never win.

I love that this book is about more than just fighting antisemitism. It is about discrimination, racism, and intolerance of any kind. Why was that important to you?

While I was researching this novel, I had conversations with several professors and rabbis about how the Nazis embraced Darwin’s concept of survival of the fittest, taking it to an extreme to create an Aryan race. What I’ve learned through my Jewish studies is that we believe in the complete opposite. We are to cherish and value every human being and our uniqueness. It’s our responsibility to take care of and protect those who may be in need of protection. Everyone possesses strengths and weaknesses. It’s a part of being human, so the emphasis must be on how every person has the ability to bring value and goodness into this world. No one is superior or inferior.

There’s a line from Logan’s dad that really struck me: “A lot of people believe in things and stand back and do nothing.” We’re at a time where our beliefs are being tested and our actions are so needed. How do we remain motivated and keep ourselves accountable?

There is a concept in Judaism that when we see something transpire, it was meant for us and we need to determine the reason. Is it an opportunity for us to learn? Is it a reflection to show an area needed for growth? Or perhaps it’s a call to action. Each one of us can take into account this concept and determine what it means for us.

As in The Assignment, not everyone is going to feel comfortable doing what Cade and Logan did. I have secondary characters who make different choices to make a difference. The point is that all of us have the power to speak up in our own way. Every day is an opportunity to start fresh. If you encounter an injustice ask yourself, “Why did I see this and not someone else? If I do nothing, could I live with it?” Doing the right thing isn’t always the easy choice, but it’s the only way to change the world.