As a European Jew, I Wish the Yom Kippur Attack in Germany Was a Surprise. It Wasn't. – Kveller
Skip to Content Skip to Footer

As a European Jew, I Wish the Yom Kippur Attack in Germany Was a Surprise. It Wasn’t. 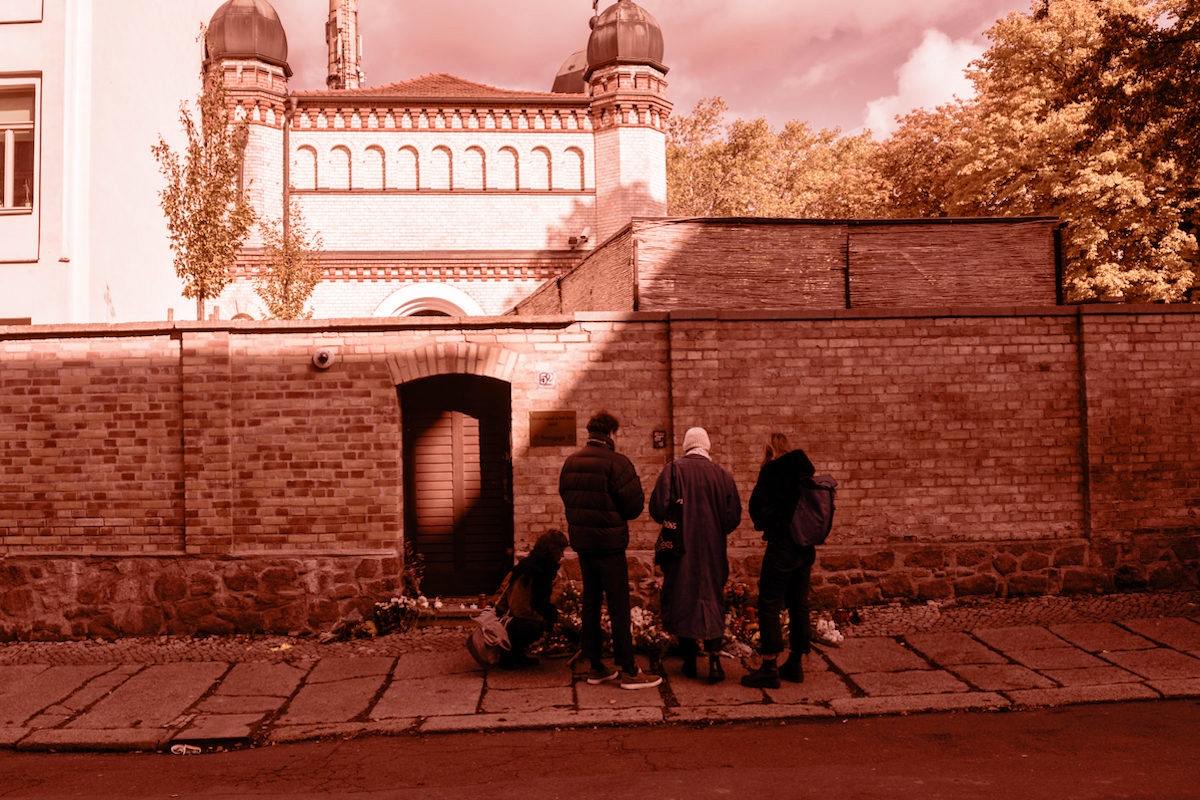 On Yom Kippur, my family attends services at the beautiful Great Synagogue of Stockholm, a towering, 150-year-old building in the heart of Stockholm that is the largest synagogue in all of Scandinavia.

Just like other Jewish communities around the world, Yom Kippur services are something members of our community make an effort to attend. Strollers and walkers cram the entrance space. Excitement about seeing relatives and friends mingles with the solemnity of the day.

This year, my husband and I brought our 6-month old daughter with us. We quickly understood that observing Yom Kippur as parents of a small child is a bit different —  I, for one, wasn’t fasting since I am breastfeeding, and both of us took regular breaks from the main service to attend the hour-long children’s service, change diapers, or simply give her some opportunities outside the sanctuary to to babble to her heart’s content.

Around noon, I took my restless baby downstairs to the newly-renovated basement in order to let her play on the huge Persian rug. I was surprised to find that there was nobody else there; earlier it had been busy with parents feeding and entertaining their young children. As I leaned back to savor this quiet moment while my daughter attempted to crawl, I looked up at the thick, white foundation walls.

“So sturdy,” I thought to myself unwittingly. “Tiny windows. A bit secluded. If a bomb were to go off this minute, would we be spared down here? If a shooter attacked, would they come down here?”

Suddenly, I realized where my train of thought was going — so I shut it down. “This won’t happen here,” I told myself.

It did happen, though. Not in Stockholm but in Halle, Germany, where a extreme-right terrorist tried to force his way into the synagogue but didn’t succeed. Instead, a woman on the street and a man in a kebab shop were murdered, and two others are in critical care. And it happened in too many places and Jewish communities before that. Four shot to death in an attack on a Jewish school in Toulouse, France, in 2012. Four shot to death in an attack at the Jewish Museum of Belgium in 2014. A Jewish volunteer security guard shot to death in front of the Copenhagen synagogue in 2015. And those are just a few examples.

Here in Stockholm, our Yom Kippur unfolded without incident. We attended a small minyan at a friend’s house for Mincha and Neilah services, and we broke the fast in a warm and happy atmosphere. However, once we were back home and I switched on my phone, I learned of the attack in Halle while scrolling through my social media feed.

I glanced up at my husband, who was also on his phone.  ”Did you see…?”

We didn’t speak more of it. Instead, we sat in silence. I suddenly felt so exhausted.

And today — one day after the attack — I still feel exhausted. I almost can’t bear that I know exactly how this will play out now: The calls on politicians and society to take the threats to Jewish life and lives more seriously, to increase security budgets, and so on. The expert analyses of manifestos and online vitriol. Leaders giving solemn speeches of condemnation and outrage. The promises that we have a future here. That we belong. That anti-Semitism will not be tolerated.

The horrible truth is that nothing about the attack in Halle is a surprise to me. Neither was the one before it, nor the one before that. Halle is hardly a wake-up call to any European Jew. We are becoming too familiar with organizing vigils, coming up with hashtags, and creating memes in the wake of terror attacks. But this time, I just feel stuck.

I thought back to Kol Nidre, which was less than 48 hours ago but feels like a brief lifetime. As I passed the police and security guards blocking off the street leading to the Great Synagogue, I had made a point of looking each of them in the eye, giving them an appreciative and confident smile.

I wanted them to feel that their presence was contributing to my family practicing our Judaism proudly and happily. I wanted them to see that we were unafraid and in good spirits.

And though we were, in fact, in good spirits, in retrospect, the act of smiling was perhaps also a coping mechanism. Because despite my total commitment to participating in Jewish communal life in Europe — perhaps defiance is a better word for it? — fear had begun to worm its way into my brain. How could it not, attack after attack? But I reasoned that if others saw me as cheerful, open, and unafraid, maybe I would start to feel that way again inside. Sort of like power posing, but for my Jewish identity.

Now, today, struggling with my feelings of numbness and frustration, I’m hoping that my “fake it ‘til you make it” posturing will get me through the next couple of days, and will once again successfully keep fear and cynicism at bay.

The one thing I draw comfort from right now is the many wonderful allies I am fortunate to know,  and who so eloquently and powerfully show their solidarity now. In particular, friends I met at the Muslim Jewish Conference, a grassroots movement for dialogue, have let some light in. For example, the German Council of Muslim Students and Academics has called for people to express their care and solidarity by showing up to the local synagogue as members attend Shabbat prayers, an action that touches me deeply. Words are, after all, not just tools of hate — they can comfort and connect people. They can spread hope and let hurting individuals and communities know that their pain and fear is seen.

My sincere wish is to regain the strength to mourn the victims of Halle properly, and return my focus on Jewish life. Especially for my daughter’s sake. The externalities of a community under threat — the security personnel, the thick glass, the police cars — will no doubt accompany her childhood as it did mine. Hopefully, though, it will not define it.