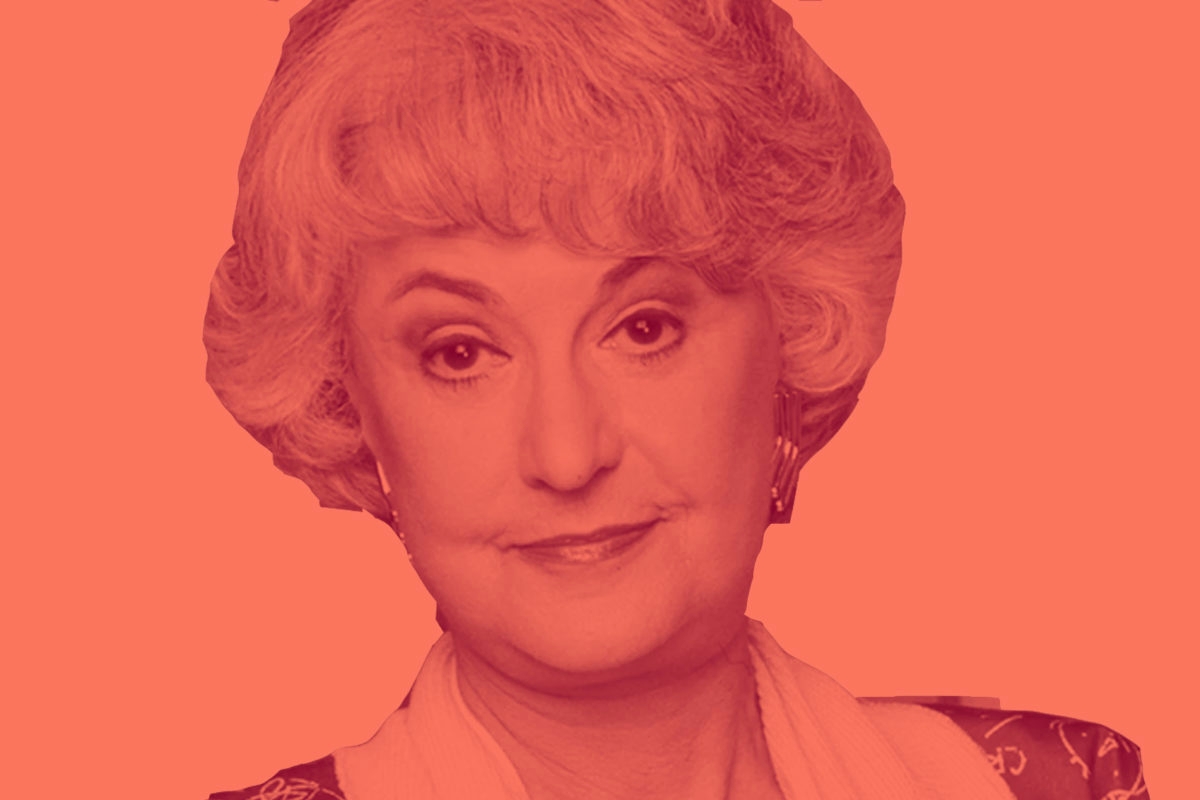 #BeaArthur is trending on Twitter, and we are here for it. While the internet might not be totally sure why the late Jewish actress and Golden Girls star is suddenly being talked about, we think it’s about friggin’ time. In fact, we would like to start a petition to make Bea trend every day of the year.

As with many viral internet things, some are positing that Arthur is trending because of a Chrissy Tiegen tweet (always a good thing). Tiegen tweeted about the general loveliness of the name Bea, and that more people should name their kids Bea. Author Bonnie Burton responded that if she had a kid, she would name her after Bea Arthur. A very good decision that we 100% condone (plus, Tiegen has volunteered to be godmother, so it’s a win-win situation all around).

If I had a kid, I would totally name her Bea after the sassy, talented actress Bea Arthur. ♥ pic.twitter.com/uADo5dCyOH

Others think it’s because of an upcoming Golden Girls cruise, which honestly, upon finding out about it, I’ve gone from thinking that cruises are a terrible and vile idea to “someone please take me on this cruise, my life depends on it!”

But if we’re being honest, there are about 587,043 reasons why Arthur should be trending, and they all basically boil down to the fact that she was truly an awesome lady. Here are just a few of the reasons why we celebrate Bea Arthur, today and every day.

She overcame anti-Semitism in her youth

Arthur was born Bernice Frankel, one of three daughters, in Brooklyn, New York in 1922. Her parents were Jewish immigrants from Europe. Due to financial troubles, the Frankels had to move to Cambridge, Massachusetts to run a clothing store. The Frankels were one of a few Jewish families in town, and Arthur faced anti-Semitic rejection. She said she felt like a “misfit.” But by the time Arthur got to high school, her smarts and her great Mae West impression earned her the title of “wittiest girl” at Cambridge High School.

She friggin’ fought the Nazis

Arthur was a truck driver for the Marines during World War II. The fierce lady received an honorable discharge and was considered “one hell of a marine.” No surprises there!

Yes, you read that right, Bea Arthur ORIGINATED the role of Yenta the matchmaker on Broadway. Here’s a recording of her singing in “The Rumor.” LOVE!

She won a Tony for her role in “Mame”

She played Vera Charles opposite Angela Lansbury, who played Mame Dennis, who gets surprise custody of her 10-year-old nephew in the Broadway production of Mame (the production was directed by Arthur’s husband at the time, Gene Saks). Here they are reprising their on-stage friendship with “Bosom Buddies.” These two incredible talents were best friends in real life, and they are just so amazing on stage together.

She fought bigotry as Maude

Arthur’s character Maude skewered Archie Bunker in All in the Family. Norman Lear was a fan of Arthur’s and wanted her in his show. Maude, a true badass, fought against bigotry, sexism, and racism, first in All in the Family and then in her own spin-off, Maude. While Maude does at times feel like the prototypical Jewish mother full of chutzpah, Arthur said Maude is not Jewish because “if you made her Jewish. . . her courage in fighting bigotry would be personal instead of ideological.”

Regardless, her famous line, “God will get you for that” is a shade-filled catchphrase for the ages.

Her lines on Golden Girls were just, well, gold

So many of us remember Arthur for her iconic role as Dorothy Zbornak in Golden Girls. Her character was the queen of sarcastic zingers way back in the ’80s. The tough, whip-smart but caring Dorothy won all of our hearts.

As for rumors that Arthur wasn’t close to her castmates, her son refuted them to The Hollywood Reporter, saying, “There was no fighting at all. They were friends. At one point they lived close enough that they would drive each other to work.”

Thank you for being a friend, Bea!

She was the first TV character with chronic fatigue syndrome

Golden Girls writer Susan Harris, who herself was diagnosed with CFS in the late 1980s, gave Dorothy the condition and made TV history.

That was because the show's writer, Susan Harris, had been diagnosed with CFS in the late 1980s. I looked it up because I thought Bea Arthur had to have it: the dialogue has got that ring of truth to it. https://t.co/hlcIpycUG1

She was amazing in the Star Wars holiday special

Here she is as the cantina lady in the Star Wars holiday special, singing “Just One More Song, Friend.” Gotta love a Golden Girl who is also a jedi.

She killed it doing the “Urkel dance”

Seriously, this video of Arthur dancing with Steve Urkel in a shiny vest is a must-watch.

She was also quite a charitable person IRL

Arthur died of cancer in 2009. She left a lot of her fortune to charitable foundations, including $300,000 to the Ali Forney Center, which helps homeless LGBTQ youth. The organization was on the brink of eviction when they received the money Arthur had willed them, and that money helped keep the organization afloat. She also gave the American Indian College Fund $100,000.

Bea Arthur trending is a good time to remind everyone that she was an incredible friend to LGBTQ people.

Thank you for being a friend, Bea. 🥰https://t.co/q0dzQ5jYYD

She was an awesome mom

Arthur had two sons with her second husband, Gene Saks. Her sons both live in California. When Ali Forney Center named their new New York shelter after Arthur, her son told The Hollywood Reporter, “That’s something she wouldn’t have wanted. But too bad. She deserves it.” It’s obvious there’s a lot of love there.

At the end of the day, she really was a feminist hero

While Arthur wasn’t always as outspoken about feminism as her character may have been, after her second divorce, she made this radical feminist statement: “I don’t think I ever truly believed in marriage anyway…. I guess marriage means that you’re a woman and not a… person.”

Bea Arthur as Dorothy Zbornak has been my entire mood during the Trump administration… pic.twitter.com/lCy5Gp3qtV

Bea Arthur is trending for a reason that no one seems to know and that is absolutely the best thing that will happen today bc Dorothy Zbornak is my spirit guide pic.twitter.com/ZbqZe1SHyE

All praise the original Queen Bea!