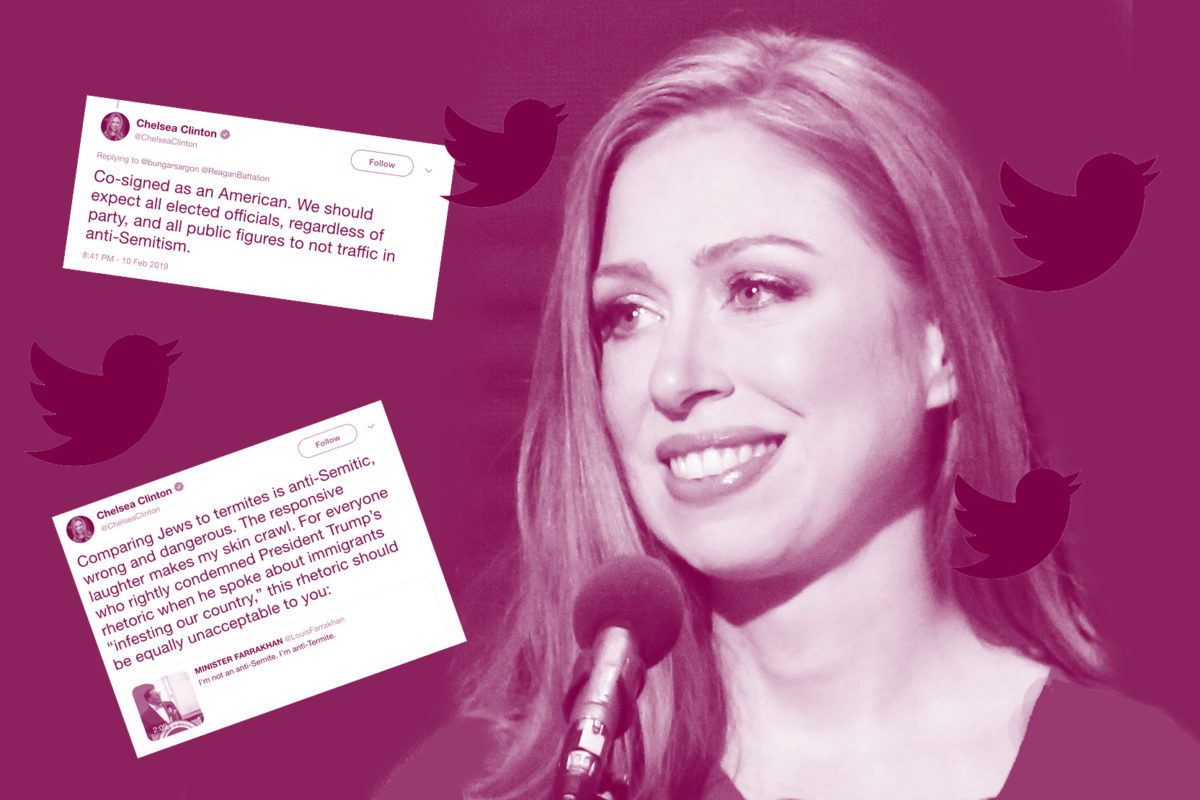 If I had to describe Chelsea Clinton’s Twitter persona in one word, it would be “mensch.” (I know, it’s a gendered word, but it totally fits.)

The former First Daughter and bestselling author of She Persisted has a knack for responding directly to her Twitter trolls and throwing them off their guard with kindness. She even thanks her trolls and wishes them a nice day — in an endearing way that somehow feels more genuine than snarky.

Clinton is a mother of two children with her husband, Marc Mezvinsky. Mezvinsky is Jewish and Chelsea is Methodist, and the two are raising their kids, Charlotte, 4, and Aiden, 2, (plus a third, expected late summer 2019!) with both faiths.

Given her Jewish ties — and, um, her general humanism — maybe it’s no surprise that Clinton is amazing at calling out anti-Semitism on Twitter. Recently, she criticized Rep. Ilhan Omar for using anti-Semitic tropes while talking about support for Israel.

“We should expect all elected officials, regardless of party, and all public figures to not traffic in anti-Semitism,” Clinton tweeted in response to Omar’s claim.

Co-signed as an American. We should expect all elected officials, regardless of party, and all public figures to not traffic in anti-Semitism.

When someone told her to “raise [her] child” instead of calling out anti-Semitism on Twitter, she responded that, especially as a parent, she felt that it was important to call it out.  And she added, “Hope you have a good night.”

Hi Alexandr – my children are thankfully asleep and have been for hours. I think we always have to call out anti-Semitic language and tropes. I feel that way particularly as a parent. Hope you have a good night. https://t.co/mp3GNStW82

She also reminded people infuriated by Omar’s use of anti-Semitic tropes to ask Republican congressmen who used similar language — as well as Trump, who infamously said there were “fine people” on both sides in Charlottesville — “to own their virulent anti-Semitic rhetoric & apologize.”

Today seems like a good day for Congressman @kevinomccarthy ⬇️, Congressman @SteveKingIA (https://t.co/5nIc3wvykI) & President Trump (both sides “fine people” post Charlottesville) to own their virulent anti-Semitic rhetoric & apologize & for Republicans to call on them to do so. https://t.co/Y0bnwsX5u6

After being called out by the speaker of the house, Nancy Pelosi, Omar has since posted a thoughtful and unequivocal apology for her statements. Clinton was also fast to accept Omar’s apology, and said she was looking forward “to learning from you and with you, and to our conversation about anti-Semitism, Islamophobia, racism” and more. Pretty mensch-y, huh?

And if that wasn’t enough, Clinton defended Omar when Trump asked for her resignation, applauding her apology and calling it a demonstration of leadership.

Mr. President, Congresswoman @IlhanMN apologized for using an anti-Semitic trope & demonstrated leadership. When have you ever apologized for your embrace of white nationalism & your exploitation & amplification of anti-Semitic, Islamophobic, racist, xenophobic, anti-LGBTQ hate? https://t.co/MAsdHkZbdg

On that same day, she chastised a troll for using the anti-Semitic “ugly Jew” trope.

Hi Adam – you’re right, I am not Jewish. Since you find me ugly, feel free to never look at me. The ugly Jew is a vile centuries old anti-Semitic trope so next time, please just go straight to ugly and leave out the rest. Thank you. https://t.co/BmgwuEcTra

Clinton’s tweets over the past few days are hardly the first times she’s been outspoken about anti-Semitism on Twitter. Last year, Clinton called out Minister Louis Farrakhan’s vile use of anti-Semitic tropes in his speech comparing Jews to termites, calling on people to condemn him and his language, especially people in the same political camp as her.

Comparing Jews to termites is anti-Semitic, wrong and dangerous. The responsive laughter makes my skin crawl. For everyone who rightly condemned President Trump’s rhetoric when he spoke about immigrants “infesting our country,” this rhetoric should be equally unacceptable to you: https://t.co/EvFp4ULugm

Of course, Clinton isn’t only tweeting about anti-Semitism — she speaks out about all the injustices she sees, from children separated from their parents at the border to mass incarceration. The passion, kindness, and openness that she espouses on social media are truly admirable.

I can only aspire to be like her, both as a mom and a citizen of the world. Thank you for all that you do, Chelsea!