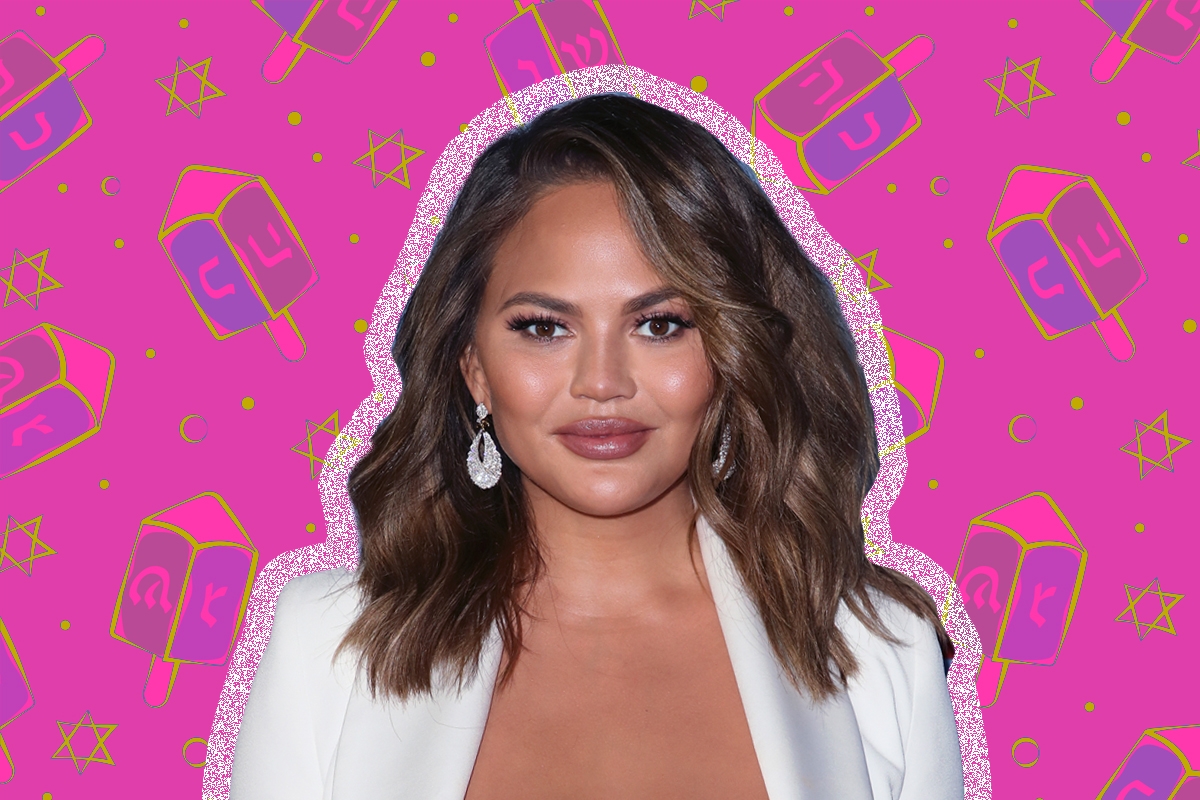 Supermodel, food writer, and sassy Twitter star Chrissy Teigen celebrated Hanukkah for the first time this year. And truly? It’s one of the sweetest odes to the Festival of Lights we’ve ever seen.

First things first: No, Teigen does not currently identify as Jewish, even though her paternal grandmother may be (more on that later). But she has spent the last few years collaborating on cookbooks with Adeena Sussman, a very Jewish author of very Jewish cookbooks like Tahini and Sababa.

Teigen and Adeena are now working on a third book, which means Sussman is currently spending a lot of time in the Legend-Teigen kitchen. Yesterday, for the first night of Hanukkah, Sussman came over to fry up a storm, for Chrissy, husband John Legend, their kids Luna and Miles, and Chrissy’s mom Pepper.

Teigen documented the festivities. In one video, which shows Adeena (wo)manning several pans of latkes, you can hear Teigen delightfully exclaims “Oh my gosh! Why have I not been doing this?! Christmas, what the heck?!” Hearing this celebrated famous person express her Hanukkah envy is definitely good PR for the Jewish Festival of Lights. Move aside, December dilemma, Chrissy Teigen thinks Hanukkah is way more delicious than Christmas.

Of course, the night wasn’t just about frying some latkes. Together with Sussman, the family lit the Hanukkah candles. They learned the rules of playing dreidel (Luna seemed very competitive about her gelt), and of course, had a delicious feast of latkes, homemade applesauce, and slow-cooked brisket along with some delicious side salads. Pepper, by the way, made a gorgeous papaya salad to go with the fried feast, and honestly, we’re very much feeling this Thai latke topping. The couple also placed latkes, brisket, and applesauce packages in Ubers to send to friends, like celebrity hairstylist Jen Atkin, who was celebrating the holiday with hubby Mike Rosenthal. (The couple apparently didn’t know who sent the latkes but ate them anyway.)

Teigen wrote about celebrating her first Hanukkah in a moving post, writing that she will never forget her first Hanukkah and thanking Sussman. “We had the most beautiful night full of gut laughing, 1,000-hour brisket, and latkes,” Teigen recounted, announcing that “applesauce is my new jam (HAHA get it)” and bragging about memorizing all the sides of the dreidel (especially the Shin).

Teigen also shared a video of her FaceTiming her father while lighting the Hanukkah candles. She ended the post with a dedication to his mother, and her grandmother, Ruth Schaefer. Schaefer is both a German and an Ashkenazi Jewish name. Schaefer’s parents were both of German descent, according to one article, and Schaffer’s mother’s maiden name was Heller, which is also a name fairly common among German Jews. So it is very possible that Teigen does have some Jewish roots (especially since she dedicated this very Jewish post to her).

Either way, it’s truly a pleasure to see a famous celebrity like Teigen and her husband (he’s famous too, we guess), celebrate Hanukkah and share its joys with their millions of followers. Truly, Hanukkah has never looked more glamorous. We wish a hearty chag shameach to the Teigen-Legend fam!