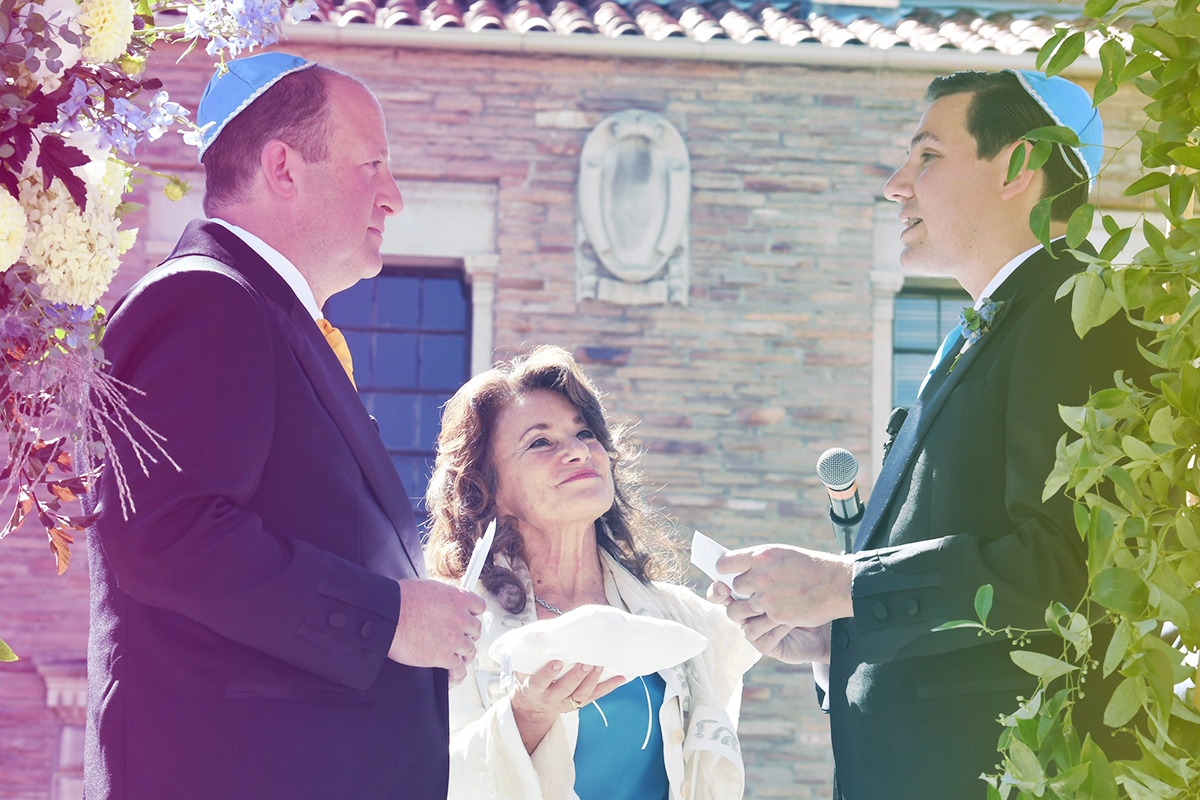 Colorado Governor Jared Polis keeps making history! The first gay governor of any U.S. state and the first Jewish governor of the Centennial State also just became the first governor to wed a same-sex partner while in office.

The wedding has been a long time in the making: six years, if you count the amount of time that gay marriage has been legal in Colorado, as well as 18, the number of years that Polis and Reis, a Jewish writer and animal rights activist, have been together. We’d be remiss not to note the auspiciousness of this timing: the number 18, of course, symbolizes chai, the Hebrew word for “life.” In fact, their wedding took place on the literal 18th anniversary of their first date, which was a trip to a local bookstore and dinner. Aww.

Polis and Reis, who really fell for each other while attending a sci-fi conference, have been through a lot in the 18 years they have been together, including raising two kids: son, Caspian Julius, 9, and daughter, Cora Barucha, 6, who is named after Polis’s great-great-aunt, Kasha Barucha. (As it happens, Polis was also the first openly gay parent elected to the U.S. Congress in 2008.)

Both kids had roles in the intimate ceremony, which required its participants to be vaccinated and have a negative Covid test to attend. Caspian was the ring bearer and Cora was the flower girl, a role that she had been greatly anticipating. “She got a great dress,” Polis told Colorado Public Radio. “She’s terrific.”

The ceremony took place in Boulder at the University of Colorado, where Reis is an alumnus. They were married by Rabbi Tirzah Firestone, a founding rabbi of Renewal Congregation Nevei Kodesh in Boulder, to which the family belongs.

Polis posted absolutely delightful pictures of the ceremony, which took place under a chuppah fashioned out of flowers and a colorful tallit with a tree-branch print. The two wore matching bright blue kippahs and had two pieces of glass to step on — one for each groom. In another photo, you can see them happily cutting a gigantic cake together. Truly, these pictures are perfect.

“Mawage. Mawage is what brings us together today,” Polis opened the Facebook post of the pictures, winningly quoting “The Princess Bride” marriage scene — though we already know their relations will fare much better than Princess Buttercup and Prince Humperdinck’s.

The wedding ceremony took place hours before the solemn holiday of Yom Kippur began — not exactly a popular wedding date. But, for the couple, that added an extra layer of meaning to the ritual.

Since Yom Kippur is all about fasting and atoning — which, according to Reis, is the equivalent of renouncing false vows —  “Instead, we would be actually taking vows to one another, which is the ultimate vow,” he told Colorado Public Radio. “To be together forever, to care about each other and support one another.” We love that.

(Polis observes Yom Kippur; three years ago wrote on Facebook that he broke fast with pueblo chile on gefilte fish. However, he clarified to a commenter that the kids did not partake in the dubious treat — “They like pueblo chile in eggs and on crackers but not gefilte fish,” he explained.)

Polis proposed to Reis at an especially fraught moment this year. The couple both contracted Covid this past March, and while Polis’s case was mild, Reis’s case was more severe. After spending days in bed, sick with a fever, and he finally had to be hospitalized. But before sending the love of his life to the hospital, Polis decided to pop the question.

“I’ve been thinking about it for a while,” the governor told CPR News. “I’d ordered the rings, with an inscription from Isaiah, and had them hidden and ready to go. And he was going off to the hospital with Covid. I mean, I knew he’d probably get better, but obviously, you never know. I thought, now’s a good time to give them something to remember here as we leave the house to take him to the hospital.”

“You never go to the hospital with an upbeat spirit, but [Marlon] probably had an extra, extra beat in his step as he walked into the hospital,” Polis added, admitting that told their kids he was about to propose only shortly before popping the question because he knew they couldn’t keep a secret.

I can’t with this love story! Someone needs to make a movie out of this adorable Jewish romance because I would watch it 568 times.

For Polis, a millionaire tech entrepreneur (he founded ProFlowers among other things), Judaism is an incredibly important part of his life. “I derive a lot of the values that I try to bring into the public sphere from my private faith,” Polis told JTA. “Certainly for me I focus a lot on education, and I’m running for governor to bring [free] preschool and kindergarten to our state and improve our schools, and that’s an important Jewish value.”

The great-grandson of Jewish immigrants from Eastern Europe, he also considers himself “a strong defender of immigrant rights and refugees, of course with the experience that Jews had prior to World War II, that few countries wanted to accept Jewish refugees.”

“As a Jewish American who lost family in the Holocaust, I’m offended by any comparison to Nazism,” Polis said in April when denouncing comparisons between his stay-at-home order and Nazism. “We act to save lives. The exact opposite of the slaughter of 6 million Jews and many gypsies and Catholics and gays and lesbians and Russians and so many others.”

Polis also quoted the Jewish poet Hannah Senesh when remembering the Coloradans who died of Covid this year.

Of course, Judaism plays an equally important part in Polis’s personal life — the family belongs to not one, not two but three Jewish congregations (the other two are the Conservative Bonai Shalom and the Reform Har HaShem). What’s more, back in 2017, he told JTA that he and his family were trying to recreate his great-grandmother’s blintz recipe.

The greatest lesson we have learned over the past 18 months is that life as we know it can change in an instant. We are thankful for the opportunity to celebrate our life together as a married couple.

After 18 years together, we couldn't be happier to be married at last. pic.twitter.com/psBhfEoEny

Mazel tov to this wonderful Jewish couple and their beautiful family! We wish them nothing but joy.