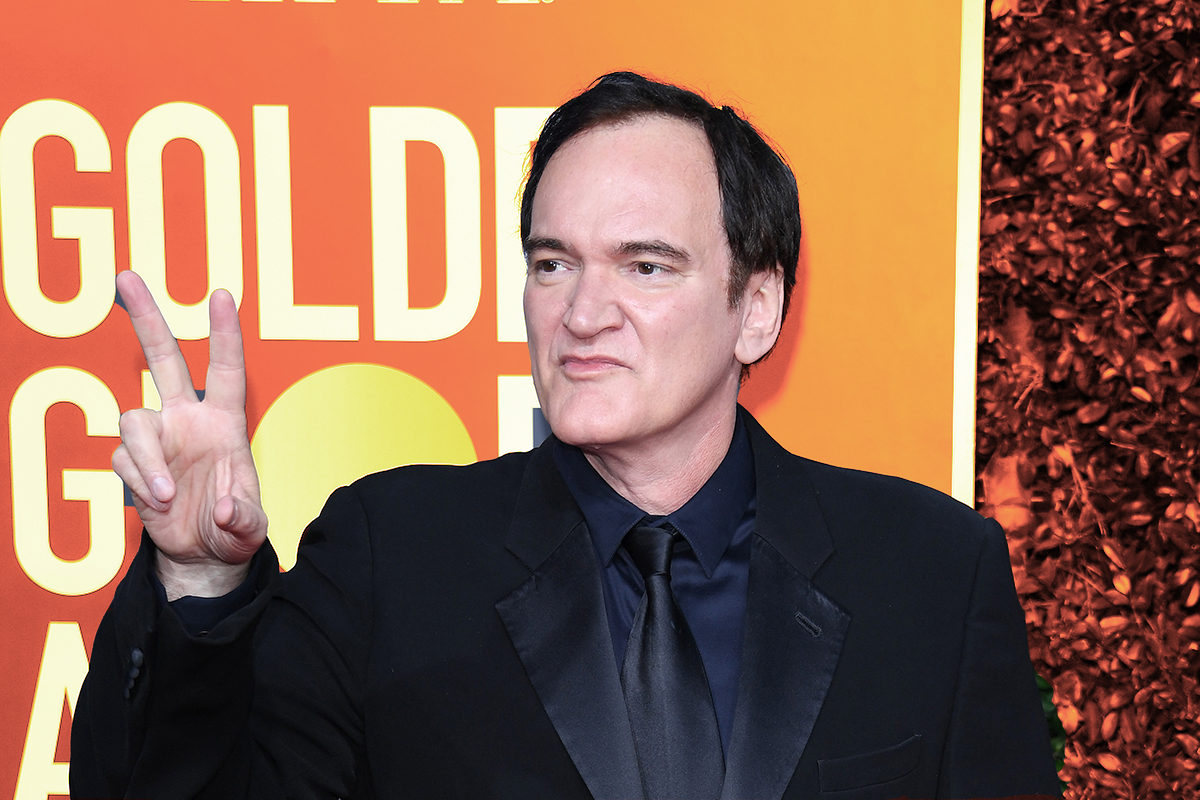 Last night at the Golden Globes, Quentin Tarantino mentioned his pregnant wife — Israeli singer and model Daniella Pick — after winning the award for the best original screenplay for Once Upon a Time… in Hollywood.

The director, whose ninth film also won the award for best picture, thanked “my wife, who’s watching from Tel Aviv, who is pregnant with my very first child.” He then ended his speech with the Hebrew words, “todah, geveret,” followed immediately by “I love you,” in English. Todah geveret is a formal expression that means “thanks, ma’am.”

Quentin Tarantino, writer/director of #OnceUponATimeInHollywood, thanks his pregnant wife in his acceptance speech for best original screenplay at the #GoldenGlobes https://t.co/D5vyLVJMas pic.twitter.com/8rxWwzJd2d

Honestly, when it comes to Tarantino’s choice of Hebrew words, geveret is kind of old school and formal. I have a feeling this is more about a private joke between the couple.

Adorably, on Instagram, the very pregnant Pick (she’s eight months along!) congratulated her husband for both his win and for his Hebrew.

Overjoyed and so proud of my husband ❤️ (also for his Hebrew!) @onceinhollywood

Many Jews in-the-know (myself included, ahem) weren’t all that surprised that Tarantino — who dated Pick on and off for more than a decade before they tied the knot in 2018 — decided to say a word or two in his wife’s native tongue. (After all, he is not the first to flex his Hebrew to impress an Israeli wife during an award acceptance speech: The Big Short writer Charles Randolph thanked his wife, Israeli actress Mili Avital, for his Oscar win by shouting “I love you, Mili,” in Hebrew.) Yet many on Twitter were bewildered by Tarantino’s Hebrew moment.

So, Quentin Tarantino speaking Hebrew was not what I was expecting tonight.

So, the question we are all dying to know the answer to: Does Quentin Tarantino speak Hebrew?

Well, until we speak to him directly, we can’t know for sure. It’s possible he understands and speaks it perfectly. But judging from the evidence we have, the answer appears to be that Quentin Tarantino medaber me’at ivrit —Quentin Tarantino speaks a little Hebrew.

Sunday was not the first time the director has spoken Hebrew publicly. Back in December, he greeted a crowd at a screening of a documentary about his life in Jerusalem with “Shalom, ma nishma?” which means, “Hello, how are you?” And his pronunciation was quite solid.

Still, so far, we’ve only heard very rudimentary Hebrew from the director. But we do know this: He has been spending a lot of time in Israel.

While he may not be fluent in Hebrew yet, Tarantino has influenced his wife’s work: Pick starred in a commercial for Yes!, an Israeli satellite TV provider, singing a Hebrew version of Nancy Sinatra’s song, “Bang Bang!” The song, as you may know, is an iconic part of Tarantino’s movie Kill Bill!

During an interview about the commercial for Mako in December, Pick was asked about the languages they intend to speak with their baby. Pick, who was seven months pregnant at the time, said she plans to speak Hebrew to their child, while Tarantino will speak English. As a family, they will speak English together, she added.

So there you have it, Tarantino and Pick intend to build a bilingual home. (As someone also living in one, I wholeheartedly support their decision!) But that doesn’t mean the director won’t want to study Hebrew for other reasons.

In the same interview, Pick said that the award-winning director’s connection to Israel is “very natural.” She said that he feels very comfortable in Israel, which she called “our center right now.”

Tarantino has made some serious investments into his Israeli life. In 2018, Tarantino and Pick bought a house for 12 million shekels (that’s almost $3.5 million) in Tel Aviv. In November of last year, they also rented a two-story villa in a central Tel Aviv for a whopping $23,000 a month.

He’s also been spotted at Israeli coffee shops, movie theaters, and even at the Festigal — Israel’s premier (and nightmarish for any parent) children’s musical contest (that once featured Gal Gadot as a mermaid). He was there to see his father-in-law perform and appeared to be enjoying himself (although one could argue that this particular show is perhaps more enjoyable if you don’t speak Hebrew).

Pick, 36, is kind of Israeli royalty: Her father, Tsvika Pick, her mother, Miri Shem-Ur, and her sister, Sharona Pick, are all successful musicians and songwriters. Pick is very close to her family, and Tarantino, as a result, seems to have become an integral part of the mispacha — after all, Pick’s nephews call him Uncle Quentin. Last year, Tarantino was spotted at a Hanukkah party with the family, and Pick has previously mentioned they have weekly Shabbat dinners.

The director says he plans to retire after his tenth film. With the birth of his first child (rumored to be a girl) looming, it looks like Tarantino is getting ready to spend at least part of his post-film career days in Israel. That means fluency in Hebrew could really help him out while ordering meals for a future little one at an Israeli mall or attending Shabbat dinners with the fam.

Luckily, we’ve got a list of helpful and essential Hebrew words and expressions for him.