Don’t Judge Me for My Ugly Shoes 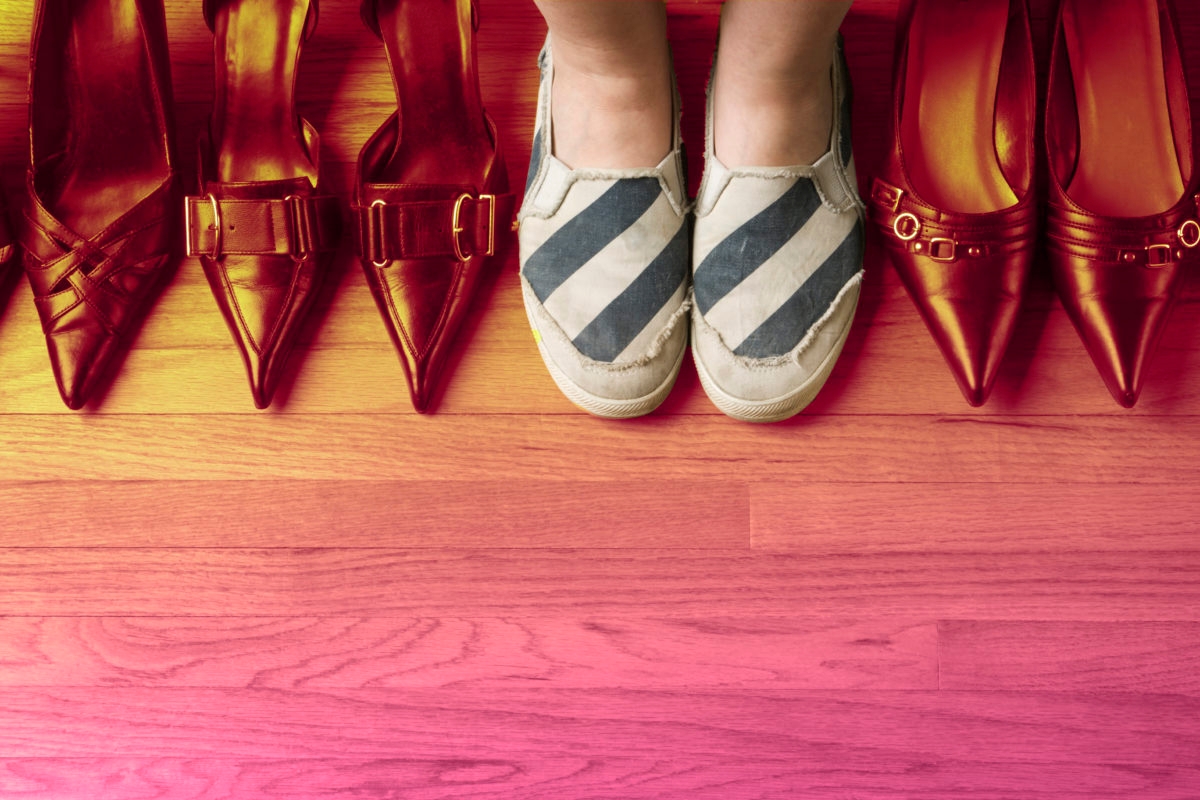 I hate my shoes.

I can say that about most of the shoes I own, actually, but the pair I’m thinking of is particularly unfortunate. I bought these slip-on sneakers when I was pregnant with my 11-year-old; I didn’t really like them then, either, but all I cared about at that point was not having to bend over and tie my shoes.

Somehow I’m still wearing them all these years later, though their appearance has not improved and probably all the shoe experts would say it’s time I retired them. But I continue to wear them because it’s easier than going shopping for my hard-to-fit feet and tastes (did I mention I hate most of my shoes?). I continue to wear them because slip-ons are still easier than tying my shoes. Yes, these days I can bend over a little better now, but I have four kids and I’m always running late. Having to tie my shoes is just one more thing that I’d rather avoid.

I do wonder, sometimes, what people think about me when they see me wearing these shoes. Do they think I’m a scatty housewife who forgot to change out of her slippers? Do they assume I like the shoes, because I’m wearing them? Do they like the shoes? (Probably not.)

Even though I’m hardly a fashionista — I might not even have enough fashion sense to recognize one — I find it a little embarrassing to think that people might think I like these shoes.

And then I think about the times I’ve noticed something about someone else, and assumed something about them. Recently, for example, I was puzzled when a friend showed up in synagogue in an outfit I thought clashed fairly spectacularly. I figured she must know something I didn’t and, in my mind, I applauded her confidence and fashion sense — apparently those patterns really could be worn together, and how wonderful for her that she could carry it off!

But then, I overheard her mentioning that she’d stopped by a neighbor’s house to get another opinion about whether the clothes matched. Just like that, my entire impression of the outfit and its wearer shifted. What I thought must be a bold fashion statement by someone with tremendous confidence turned out to be a possibly poor judgment call by a friend of someone who actually shared some of my insecurities.

How often do we perceive something about someone and completely misread what it tells us about them?

That same Shabbat, I was talking with another friend and accidentally said something that I suddenly realized might be awfully offensive. (Let’s not embarrass me by spelling out what I said.) It was one of those moments when you just can’t take it back or explain it without making the whole thing even more awkward and bad, so I kept my mouth shut. For the next few months, I was simply embarrassed every time I saw this person.

I found myself, oddly, thinking about that unfortunate comment, alongside my other friend’s unusual outfit and my own unfortunate footwear. It’s not just clothes that might lead people to draw mistaken conclusions about us. We all make assumptions about others based on what we see and what we hear; my own near faux-pas rested on an assumption I’d made about someone else, that, if wrong, would mean I’d just offended her terribly.

I was so worried: Does this friend think I’m an obnoxious, judgmental person because I made that comment? I wanted to tell everyone — including my friend, and myself — that’s not me! That unthinking, offensive remark doesn’t represent me! It’s like my ugly shoes that I accidentally left the house in — don’t assume you know the full story!

There are so many things we might get wrong about people when we don’t have enough information. Even things we don’t realize could possibly be wrong, because we just don’t realize there’s any other possible right — like how I continually get called by the wrong name.

Yes, if you peeked at my byline, you’ll see that my name is Sarah. Pretty simple, right? But I pronounce it the Hebrew way: Suh-ruh. But who would think of that when they just see it written, if they weren’t familiar with the variations? (There are actually lots more variations than that.) Even people who hear me say it don’t always get it right; their brains just naturally revert to what they’re used to.

So, I try to be patient and understanding, and remember that just because someone got my name wrong, that doesn’t necessarily mean they don’t care about me or about getting names right. Just like the fact that I wear dorky shoes or make an ill-conceived comment doesn’t mean I like the shoes or the comment.

There’s so much more to all of us than meets the eye, or even the ear.

Especially as we approach the Day of Judgment, it seems like a good time to remember that, to think of all the ways people might misperceive us — and realize we might misperceive them, too. It’s a good time to remember that only God gets to judge, and that God’s judgments might be more favorable if we work on ours. It’s a good time to work on building more positive relationships with people even if their outfits don’t match or they say the occasional dumb thing. Because you never know what else there might be inside.