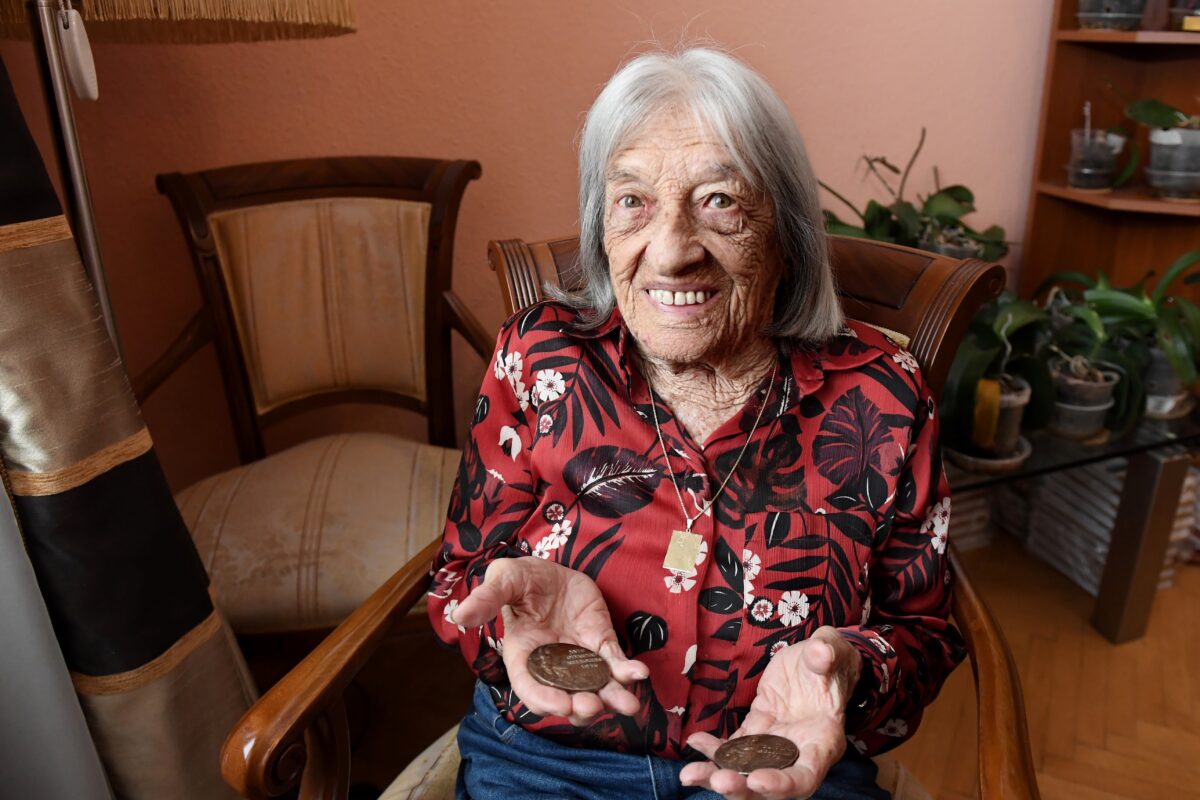 Editor’s note: This article was originally published in July of 2021, ahead of the Tokyo Olympics. We are republishing it today to celebrate Agnes Keleti’s 102nd birthday. She remains the oldest surviving Olympian.

The description “badass” gets tossed around an awful lot these days. But in the case of Jewish Olympic champion Agnes Keleti, the word is completely spot-on.

This amazing, 100-year-old Holocaust survivor and gymnastics maven is nothing short of awe-inspiring: She’s the oldest surviving Olympic champion and, having won 10 Olympic medals, she’s the most decorated Jewish female Olympic athlete of all time.

All this is despite the enormous setbacks Keleti faced as a young athlete growing up in Budapest, including the cancellation of the 1940 and 1944 Olympic Games due to World War II, and being kicked out of her gymnastics club for being Jewish. She survived the Holocaust paying a Christian maid to use her identity; Keleti adopted a rural accent and worked as a housekeeper and furrier.

Then, incredibly, at age 31, she won her first Olympic gold medal in 1952 Helsinki Olympics — and, four years later, won four more in Melbourne.

And now, as the Tokyo Olympics are just around the corner — the opening ceremony will be on Friday, July 23 — Keleti stars in a new digital campaign for the International Olympic Committee, the international sporting organization that runs the Olympics, that aims to remind sports fans across the globe that we are “stronger together.”

Promoted as a short film (it’s 1 minute, 49 seconds, to be exact), “What Agnes Saw” opens with a brief introduction to the Olympic champ, featuring some archival footage of Keleti competing at the Games. “A life. An Olympian,” a voiceover begins, and we see footage of present-day Keleti delightedly watching a film. “And in her century, what did Agnes see? Agnes saw a light. A light that helped illuminate the entire world.”

The movie goes on to show clips of trailblazing Olympians throughout the generations, including legendary track athlete Jesse Owens, the grandson of slaves, who was credited with “single-handedly crushing Hitler’s myth of Aryan supremacy” at the 1936 Berlin Olympics, and 30-year-old Dutch mom-of-two Fanny Blankers-Koen — mockingly known as “the Flying Housewife” — who won a record-breaking four gold medals in the 1948 Summer Olympics in London.

“Agnes’s story reminds us of the true power of resilience. She is proof that you can experience the worst aspects of humanity and against all odds, rise above it,” the IOC’s digital engagement and marketing director, Christopher Carroll, said in a statement. “When we see the world through Agnes’s eyes, we see a changing world that is better when we come together.”

Also featured in the inspiring film are contemporary athletes such as Usain Bolt, Naomi Osaka, Simone Biles and British skateboarder Sky Brown, who, at age 13, is one of the youngest ever Olympians. “She saw generation after generation stand in that light, and watch their differences disappear like shadows in the noonday sun,” the voiceover continues. “And now, she sees a new generation, full of hope, running towards their century.”

“Together we are stronger than the darkness can ever be,” the moving film concludes — and, as the camera cuts to Keleti’s smiling face, you just might notice a tear or two stinging your eyes.

It’s a beautiful sentiment, and we are so thrilled to see the legendary Keleti spotlighted in this way. And yet, as Keleti herself said, despite her myriad athletic achievements, she considers her family her biggest accomplishment. As she told Haaretz Sports in January, she’s proudest of moving to Israel, starting a family, and “having two children who are successful, happy, and love what they do.”

You can watch the short film here: