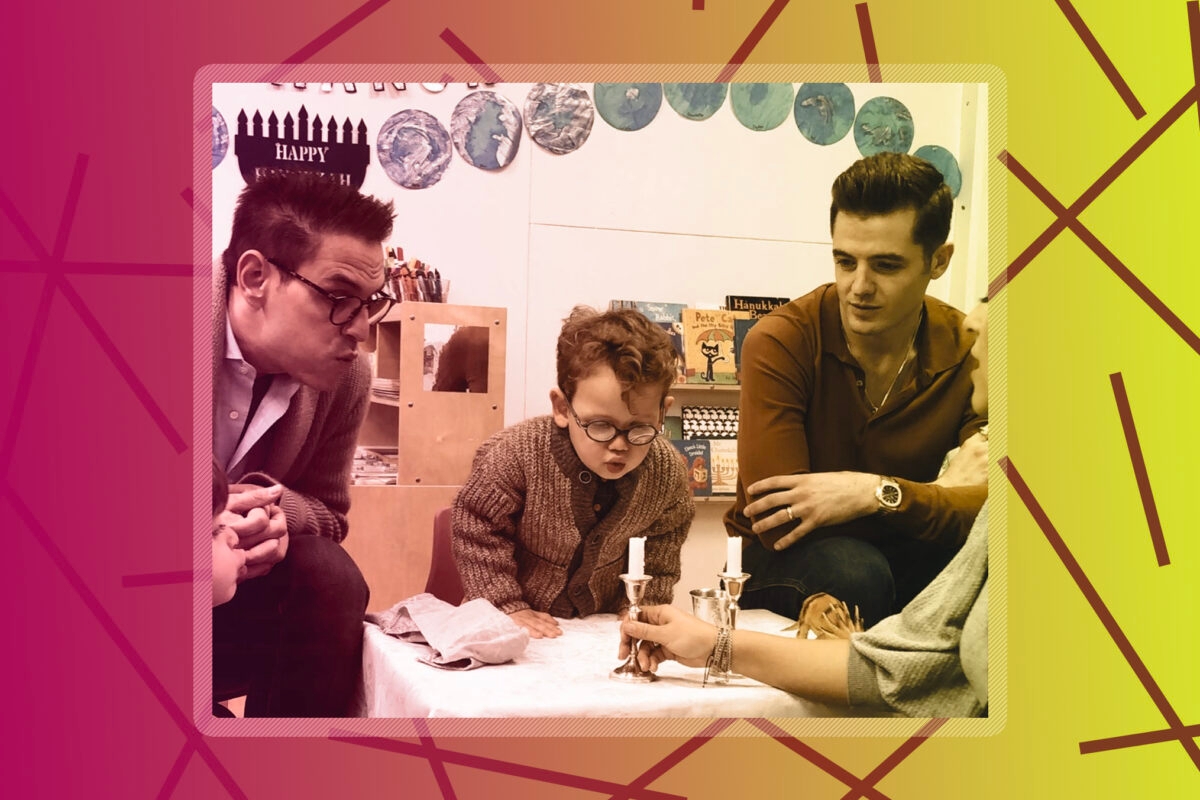 Greg Berlanti is a prolific TV creator. He started his career as a writer on Dawson’s Creek, directed the wonderful 2018 romantic comedy Love, Simon, and is the man behind some of my favorite binge-worthy programs, from Arrow to Riverdale to Supergirl.

So why are we writing about Berlanti on Kveller? Well, neither the writer/producer/director nor his husband, Robbie Rogers (a former professional soccer player), are Jewish — and yet, they are raising their kids Jewish!

What’s more, they’re doing it in the most adorable way. Just check out this adorable picture of the two with their son, Caleb, when he was the Shabbat star of the week in December 2019:

Caleb was the Shabbat star today… If you know @gberlanti then you can imagine how much he loved watching him lead the way, maybe even a tinge of jealousy or competition 😉

“Caleb was the Shabbat star today… If you know [Greg Berlanti] then you can imagine how much he loved watching him lead the way, maybe even a tinge of jealousy or competition,” Rogers wrote in the caption of the darling picture, which shows son and husband are both blowing out a Shabbat candle with equal candor.

Just why is Berlanti envious of his adorable son? (I mean, personally, I’m a bit jealous of that cardigan!) Well, as Berlanti recently told viewers who turned into a live conversation with entertainment lawyer Patti Felker for the Jewish Federation of Greater Los Angeles, he wasn’t raised Jewish — but he sort of wishes he was.

“I grew up in… Rockland County, New York until I was about 10, and then we moved to Westchester County and our community was Jewish and Italian,” Berlanti explains. “And I’m not sure I knew that I was one or the other before I was 10 or 9 years old.”

Unfortunately, once Berlanti realized he wasn’t Jewish, things got harder for him: “I was raised Catholic, I was an altar boy for 5 years, I’m a recovering Catholic,” he told Felker. “I felt very alone in my Catholic faith growing up and I was at great odds with it.”

But Berlanti nonetheless knew he wanted to raise his kids Caleb, 4, and Mia, 1, with “a sense of faith.” So he and Rogers “made the conscious choice” to raise their kids Jewish.

“I was always very enthralled and comfortable around the Jewish religion, it was something that sort of… was calling to me as a kid,” the 47-year-old told Felker.

The couple even sought a Jewish egg donor — “not the easiest thing in the world to find,” he admits. He even asked Felker — who is his lawyer and is Jewish — to be their children’s godmother.

The funny thing is that Caleb insists that Berlanti is, in fact, Jewish — and that Rogers is not. (Kids say the darndest things, don’t they?) And he will not be dissuaded! “He delights in going around and telling my husband ‘Haha, you’re not Jewish,'” Berlanti told Felker.

For both Berlanti and Rogers, “there were a lot of tenets of the religion that made us really excited,” about Judaism, he says. One of those reasons may be that Rogers seems to be a superfan of chocolate challah bread.

Caleb attends a Jewish day school, and the family celebrates Shabbat and the Jewish holidays — oftentimes with Felker. “He knows his four questions, he’s fantastic,” the lawyer says about Caleb. (Also, I must say, I love Caleb’s Hanukkah pajamas!)

Berlanti’s affinity to the Jewish faith extends to his professional life, too — he’s known for including Jewish characters and storylines into his shows. In his 2002 medical drama, Everwood, he made the lead character Jewish, and the series featured scenes of Jewish ritual mourning and even a bat mitzvah! Berlanti says he got a lot of anti-Semitic hate mail for that show — back when you still got actual hate mail, and not Tweets. (Remember those days?!)

Berlanti and his husband even recently visited Israel: “It was everything I hoped it would be and more,” he told Felker. “And I can’t wait to take my kids.”

“Still basking in the light and glow of the amazing trip to Israel with @robbierogers and friends,” Berlanti wrote about the trip on his Instagram. “Everything about the country and the people moved my spirit and my heart. Here we are at Jaffa Market in Tel Aviv.”

Berlanti and his beautiful family just melt my heart! I love that he is raising his kids in a warm, caring — and, yes, Jewish home.