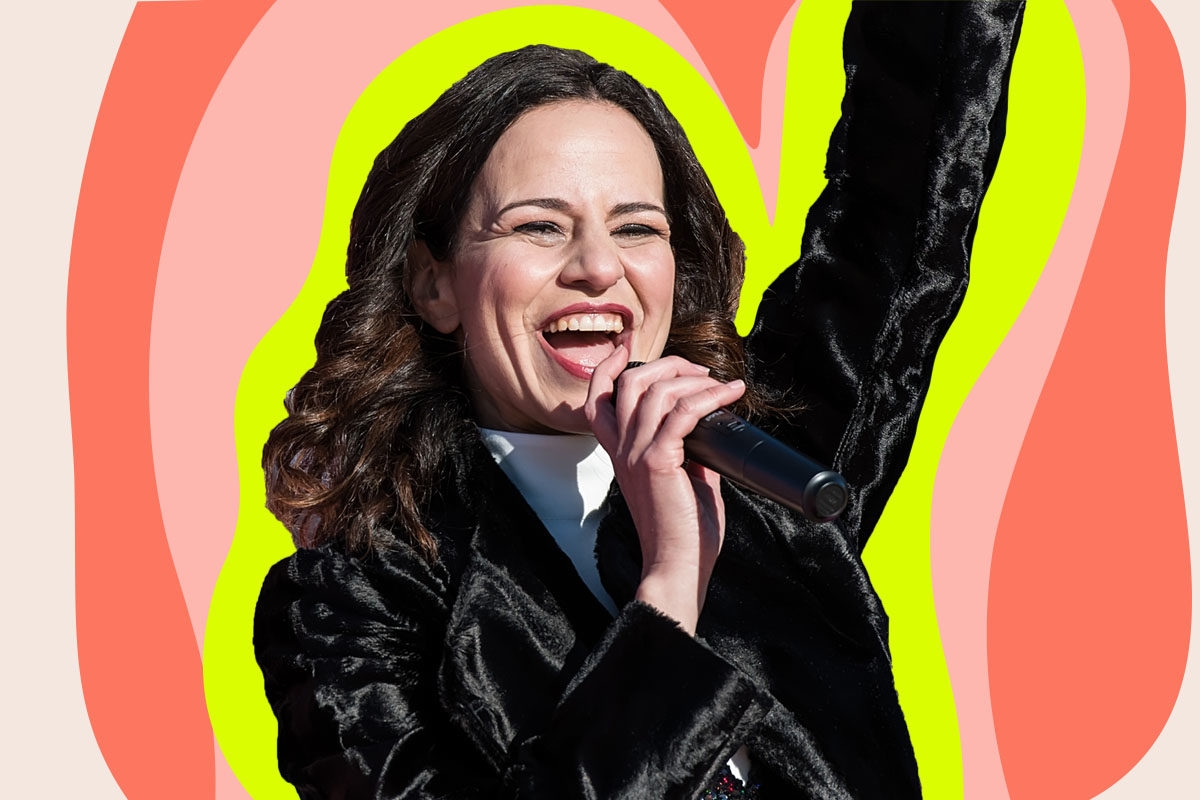 Broadway star Mandy Gonzalez revealed that she has been fighting breast cancer while continuing to perform in Hamilton.

“Yes, I have breast cancer. But it does not define me. I am a mother, a wife, a daughter, a friend, an actress, a squad leader. None of that changes,” the Jewish mom recently told People magazine.

Remarkably, it was an elective mammogram that detected the cancer, potentially saving her life. “I don’t have a family history of breast cancer, and I had the option of whether to get a mammogram or not, because I was of the age,” Gonzalez, 41, said. “Because of the brave women that have surrounded me and shared their stories, and because breast cancer tends to impact Latina women at a younger age than the general population, I decided to get a mammogram.”

The mammogram didn’t come back clean, so she was advised to return in six months. At that follow-up appointment, she was diagnosed with breast cancer. She underwent surgery in November 2019.

“Everything happened very fast, I was very fortunate that they were able to catch it early,” Gonzalez told People. “It’s important for women to know that early detection is key. As a community, as a society, we need to figure out a way so that everyone has access to a mammogram.”

Gonzalez is still undergoing treatment — and, incredibly, she’s continuing to perform on Broadway as Angelica Schuyler in Lin-Manuel Miranda’s smash hit, a role she’s had since 2016. She originated the role of Nina Rosario in Miranda’s first Broadway musical, In the Heights, in 2008, and played Elphaba in Wicked in 2010 through 2011. She made her Broadway debut in Aida, as a standby for fellow Jewish mama/Broadway powerhouse Idina Menzel.

“I know that I’m not alone,” Gonzalez said. “There are so many mothers and daughters and sisters, so many people out there who are going through this, and I want them to know that I stand with them. We need to be comfortable talking about this. There is no shame. There is strength in sharing our stories and learning from one another.”

Gonzalez is mom to an 8-year-old daughter, with painter Douglas Melini. She doesn’t post much about her daughter on social media, but following the Pittsburgh synagogue shooting, she shared on Twitter about taking her daughter to Hebrew school:

As I was getting ready to drive my daughter to Hebrew school today, I hesitated out of fear. I thought about all the fear and hate my ancestors had to face. They faced it with STRENGTH. So, I took a deep breath and I decided, I will not let hate determine my family’s future. pic.twitter.com/UrMwUuGAxT

Gonzalez’s mom is Jewish and her dad is Mexican-American, and she grew up in Santa Clarita Valley, California. Here’s an adorable flashback photo from her bat mitzvah:

As a child with a Jewish mother and Mexican father, I grew up celebrating both Easter & Passover. I feel so lucky to have grown up in such a warm, loving environment. Let’s Fear-Less and embrace our differences this weekend #FearlessSquad (Bat Mitzvah) pic.twitter.com/4w2U9BaKLq

In October 2017, Gonzalez released her debut album, Fearless. The titular track, “Fearless,” written by Lin-Manuel Miranda, tells the story of how her parents fell in love as pen pals during the Vietnam War.

“My dad was drafted to Vietnam. He met my mom as a pen pal during the war in Vietnam. She was a kid, a Jewish girl from the Valley. And they fell in love through letters. And when he came back he showed up on her doorstep, and they were from two different worlds. My mom’s family wasn’t that happy with her marrying somebody outside of the culture, as well as my father’s family. So, my mom decided that she was going to go with her heart, and she just kind of took off. But through their love, they brought peace to the family, and I never knew any of that growing up. I just thought everybody loved us, and all that kind of stuff. But they really sacrificed a lot for us,” Gonzalez told Bustle.

She also started a #FearlessSquad, an online movement for people to be kind and look out for one other.

“Traveler there is no trail, the path is made by walking // Caminante, no hay camino, se hace camino al andar.” ⁣ In May 2017, we embarked on an adventure together of #FearlessSquad. Since then, we have shared our hopes and dreams, celebrated our victories, and helped each other get up when we fall. We have been honest about our fears, knowing that courage lives best in community. It has been an honor to see how many lives we have been able to touch, and now I need all of you. What I'm about to tell you is scary for me. But that's what #FearlessSquad is all about. To face our fears … together. I have breast cancer. OK. I said it aloud. One less thing to fear. As you can imagine, I have a range of emotions – worry and anger, for sure, but also gratitude. Gratitude because along with millions of other brave people around the world, I will fight it. Over the course of my life, I have played many roles that I am very proud of: singer, actress, author, daughter, sister, wife, and mother. To this list I look forward to adding one more: Mandy Gonzalez, cancer survivor. There is no going back to the way things were before. I can only go forward, courageously with you. And I know I am not alone in this battle; as I go through this I am sending so much strength and love to others out there like me fighting this challenge. Keep going! We got this! Throughout treatment, I will continue the wonderful honor of playing Angelica Schuyler in Hamilton at the Richard Rodgers Theater. So #FearlessSquad I hope you’ll be by my side on this next journey. There will be times to laugh and times to cry. Happy or sad, they will be reminders that we can do anything together. With love and gratitude, Mandy xo

We’re so proud of Gonzalez for sharing her story with the world and empowering other women to make decisions about their healthcare. We’re cheering you on, Mandy!