He Learned Yiddish to Translate His Grandfather's Stories for Kids. The Results Are Delightful. – Kveller
Skip to Content Skip to Footer

He Learned Yiddish to Translate His Grandfather’s Stories for Kids. The Results Are Delightful. 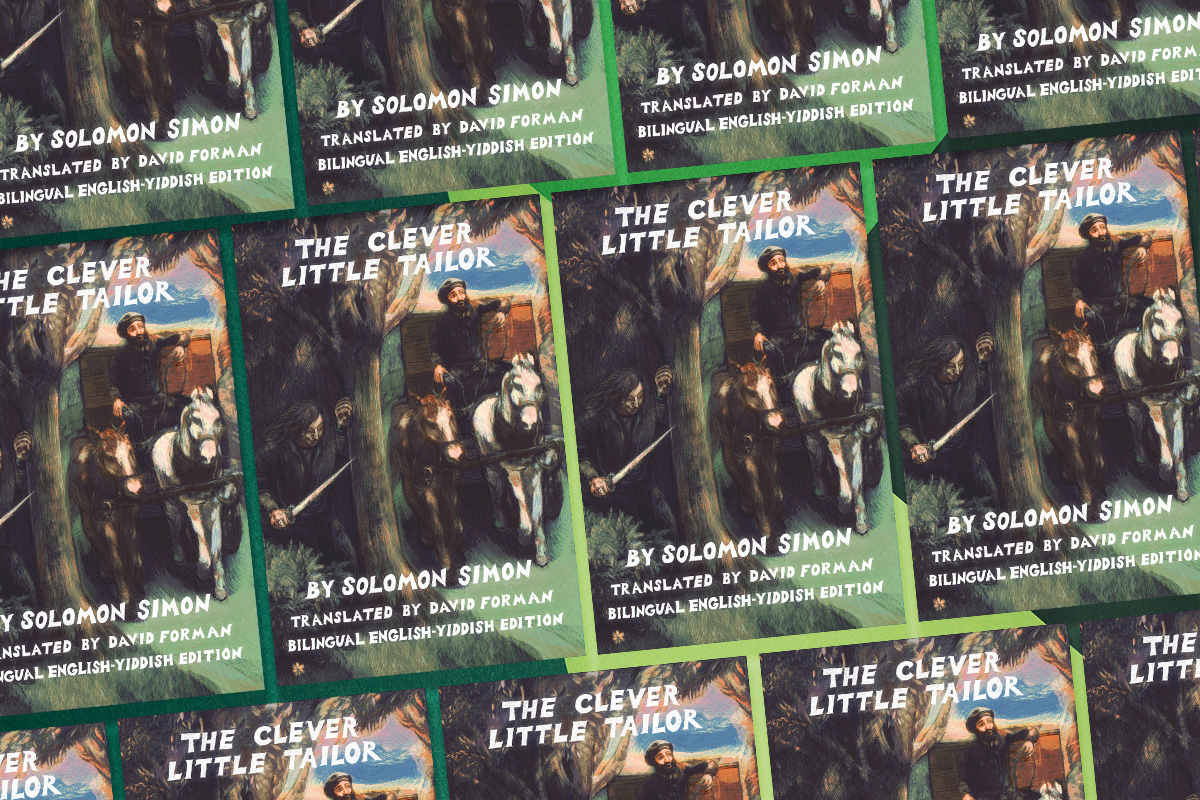 As a child, David Forman knew that his grandfather, Solomon Simon, had written books in Yiddish, but Forman couldn’t read them because he didn’t know Yiddish. When Simon died in 1970, then 10-year-old Forman promised himself that he would one day learn the language and read his grandfather’s books. It took a few years, but, in his fifties, Forman learned Yiddish — and started translating. In September 2021, Kinder-Loshn published Forman’s translation of Simon’s ”The Clever Little Tailor” in a bilingual English-Yiddish edition.

Billed as a novel, the book could also be seen as a collection of stories for children about a poor, Polish Jewish man who uses his wits to prevail in situations where rich and powerful people flounder. I spoke with Forman about his path to translating his grandfather’s work in the interview condensed below.

Could you tell me about your relationship with your grandfather?

It was a relationship of mutual delight. When I walked into his house and he saw me, his eyes just lit up, and he had just bright eyes, and he was just an energetic man. He was just delighted with my mere existence in the world. He had eight grandchildren, but six were old enough to really have a relationship with him, and each of us was secretly convinced that we were his favorite. The other thing about him is that he was a storyteller. He would plunk you on his lap and tell you stories. And, sometimes, he would read his stories from his children’s books. The two of his children’s books that were available in English when I was a child, which were “The Wise Men of Helm” and “The Wandering Beggar,” were just touchstones of my childhood.

When did you first encounter “The Clever Little Tailor?” Were you aware of it as a kid?

Absolutely not. As a child and a teenager, I never had any of his Yiddish books read to me, and I never tried to read them. They were inaccessible. And when my grandfather died, it made a profound effect on me that he had left all of these books, these treasures, that I could not read. I remember to this day, in that grief after he died, promising myself that I would learn Yiddish someday. And I would read my grandfather’s books, and I would find out what was in them and what he had to say — not just his stories, but his ideas, or more about who he was. And I meant it. And yet I didn’t begin to make good on that promise until I was in my fifties.

During the years between your grandfather’s death and the time you began to learn Yiddish, did you believe that you would realize your dream one day?

I never stopped believing that I would learn Yiddish someday. When I went to college and there were no Yiddish classes, I studied German for two years, hoping that it would help me with Yiddish. I was an artist after I got out of college, and I dabbled a tiny bit in Hebrew calligraphy, so those letters remained also somehow in my eye or in my hand.

How did you go about learning Yiddish?

I went to my first Yiddish class as an adult at the Jewish Community Center in Rochester. I grabbed a friend from that class, and we began reading “Di Heldn fun Khelm,” the Yiddish version of “The Wise Men of Helm,” together. Pretty soon after that I was reading a second book on my own at home and translating it as I read. I would write out the Yiddish in calligraphy and then translate it in pen underneath.

Then I moved to Ithaca, and there were no Yiddish classes here, so I began taking classes online with the Workers Circle in New York. A couple of iterations of those online classes and then I went to YIVO in New York for their intensive summer program in Yiddish language.

How early in your Yiddish study did you start translating “The Clever Little Tailor?” How long did it take you?

I think it was about five years ago. I had gotten a lot of experience from the first couple of books that I translated and all those other classes, too. And, as I was doing it, I felt like, “Okay, this one’s for real.” And I started to get the idea in my mind that it would be great to publish this in a bilingual book with the Yiddish and the English together. It took me a long time, maybe 10 months or something, and right about as I was starting my first draft of the last chapter of the book. I got an email from [Kinder-Loshn publisher] Jordan Kutzik saying, “I’m interested in starting a new press to publish classic Yiddish children’s books with English and Yiddish, side by side in the same book. And we want to begin by publishing your grandfather’s book, “The Clever Little Tailor.”  And I wonder if you know who has the rights to the book.” And I have to tell you, that was just an incredible moment. I almost could not believe my eyes. So I emailed him back and said, “Well, I’m actually in the process of translating it right now. And I wonder if you would consider working with me.”

Can you pinpoint something in the book that struck you as emblematic of your grandfather?

There’s a scene at the beginning of Chapter 6 when fancy carriages pull up to this big courthouse that has hussars standing at attention, holding pikes guarding the courthouse, and the judges come out one at a time and, and, finally, the Clever Little Tailor comes out and the hussars salute him. And the Clever Little Tailor says something like, “Oh, I guess it’s a parade. Full-grown men are playing dress up.” My grandfather was a pacifist. And he had a kind of distaste for pomp, but especially for military pomp. I think he’s communicating to children that these people in power, they don’t know everything. That they think they’re so important, but actually, they can be a bit silly.

At the end of the book — spoiler alert — the happy ending is that Shnayderl finally gets to go home. Do you see something wistful in the notion of home as the story’s happy ending, given how many times entire communities of Jews had had their homes destroyed?

I haven’t thought about it in that way. In fact, when I read the book the first time through, I was sort of shocked that he so cavalierly left his wife and children and went off on adventures. It didn’t occur to me to think about that, in terms of the situation that Solomon Simon was in in 1931 or 1932 when he wrote this book. He was, of course, an immigrant to the United States. He left to get out of service in the Russian army. While some people did go back to visit, he never did. And so yeah, I guess wistful might be an appropriate word for that. He didn’t leave because he hated it there. He left because he felt he had to. He loved America, but he never felt negatively about where he grew up.

What kinds of responses have you received since the book came out? Do you have a sense of who’s reading it?

I have gotten responses from people who are studying Yiddish, who are very happy to have a bilingual children’s book to use to learn. I’ve also had the gift of having a couple of parents send me videos of their children reading the book out loud, one of a child reading the English, another of a child reading the Yiddish. Children like the book. However, it is mostly the children of people who know something about Yiddish and have been involved with Yiddish who have gotten the book. Word has been slower to get out to the Jewish community more generally. But the book is selling well; we’ve gotten off to a great start. And I really do think eventually it will find all of its audiences.

This interview has been condensed and edited.