How I’m Rededicating Myself Every Night During Hanukkah 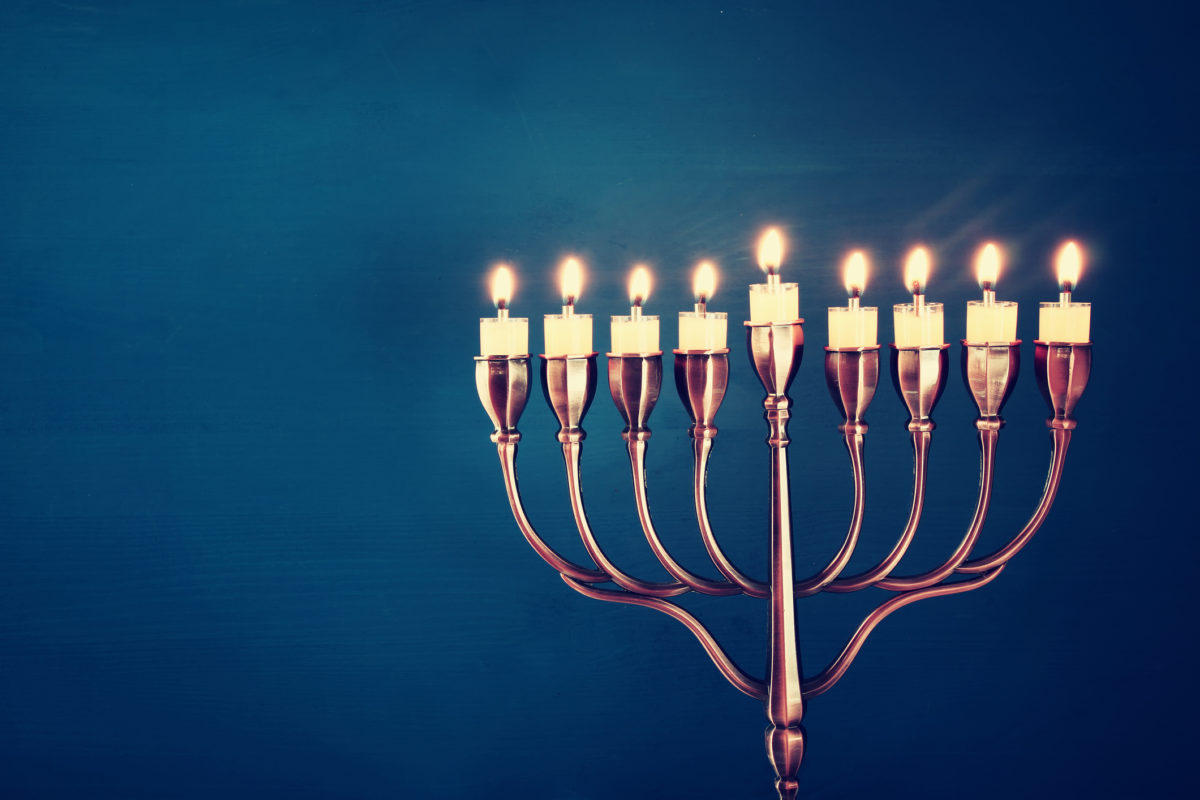 It has only been a little over a month since the election. The news is filled with hate crimes. All over the country I read about how vandals are defacing synagogues, the homes of Jews, and even Unitarian Churches. Have my fellow Americans always hated this much? Is it just all right to say so now with the election of Donald Trump as president?

I have been musing of how to combat this. I don’t want to become more bitter and cynical. I also don’t want this to be the new normal–one that I just accept.

I keep coming back to Hanukkah and the Hanukkah menorah–and the metaphor of adding light to the world. The Maccabees rededicated the temple; I plan to rededicate myself.

The first night: Beginning with me

As I light the first candle, I rededicate myself. I have become too cynical and that is not the person I want my daughter to emulate. It is time to start with the little things. I don’t need to roll my eyes when someone takes too long to pay in the grocery store. I can count to 10 before I use my horn when the person in front of me daydreams at a green light. Moreover, I can give these strangers who surround me a break.

The second night: Taking my spouse’s hand as we face the world

As two candles are lit by the shamash, I can remember how I took my beloved’s hand beneath the chuppah. Sometimes it gets lost in all the parenting and work stuff how much better things are when things are good with us. I have a feeling that safe spaces are going to be few and far between. On this second night I rededicate myself to my spouse.

The third night: Valuing our child for the light she brings

My 4-year-old is a huge fan of her shoes. They have Anna and Elsa on them and they light up when she jumps. One evening we were driving back home and she was making her shoes light up by banging her feet together.

There are going to be some pretty dark days ahead. On the third night of Hanukkah I will help my daughter add more light to the world. I will rededicate myself to showing her how she can light up the world by actions and by deeds and by just being herself.

The fourth night: Not allowing the predominant incivility to become my normal

My daughter will become politically aware with a president who is a cyber bully. This President Elect has coarsely described women and people of color. Right now my daughter is too young to realize that he is speaking against her, but I am not. I will fight against his way of speaking and acting becoming the new normal. I will speak of the President respectfully as I will try to respect the office, but I will call him and anyone in his administration out if and when they do not treat others with that same respect. To quote Michelle Obama, when they go low, I will go high.

The fifth night: Standing with my fellow citizens

My husband is not Jewish. I light our menorah next to our Christmas tree. Our loves, our lives, show that two religions can live together in peace. When I light the fifth candle, I will rededicate myself to living in peace with all religions.

When I am commuting on the train and I see a woman wearing a hijab, I will move over so she can sit next to me. I can be a safe person for that woman to sit next to—and I will be. I will cross the street to walk with the children of Ishmael because I have friends whose grandparents remembered how people crossed the street to walk away from them as they wore a yellow star. I will fight any and all legislation to “register” Muslims, Christians, Pagans, or atheists. “Wait,” you say. “no one is talking about registering Christians, Pagans, or atheists.”

The sixth night: Standing with the LGBTQ community

As I light the candle for the sixth night of Hanukkah, I will thank God for my relative safety. I will think of those for whom the events of November 8 made them feel very unsafe. I speak specifically of the LGBTQ community. I try to be inclusive when I speak of my child’s future spouse. I always use inclusive pronouns. She sees our friends who are gay, bi, lesbian, and trans. To her they are just people who come to the house to play with her and lift her high. It hurts that people can’t see that no one can decide who they love. As a great poet said, love is love is love is love.

I will march with my friends. I will stand with them. I will be a safe place for them. I will work so that we do not go backwards with the rights that they have won. I will dedicate my energies to helping those who love be able to marry as they wish.

The seventh night: I will remember

As I light the seventh candle I will remember those who are no longer here. I will remember my mother and my grandparents and wish they were beside me. I will remember Joe McKnight, Eric Garner, Michael Brown, Tamir Rice, and too many others who died due to a culture of racism. I knew none of these people personally, but I know their families still grieve. I will dedicate myself to becoming an ally. I don’t know if I can qualify as woke yet, but I am waking up and I will not go back to sleep.

The eighth night: Being the change

Look at that menorah! It is blazing with light. We could shut off the lights and see by its light. I want my mitzvot to shine like this in the coming darkness.

I will look at this light and remember that we are not alone. That when people join together to do good, their lights can shine a room, a city, a country.

On this last night of Hanukkah, I dedicate myself to tikkun olam—repairing the world. I will write letters to my Congressional Representatives. I will boycott when a boycott is called for. I will not give up. There’s a lot to be done and it begins with me.

What will you dedicate yourself to do this Hanukkah?

I’m Trying to Love My Pregnant Body, But These Comments Don’t Help

Wondering when Hanukkah 2016 is? Find out here.