How This Iconic Yiddish Song Became an Anthem for Black Americans 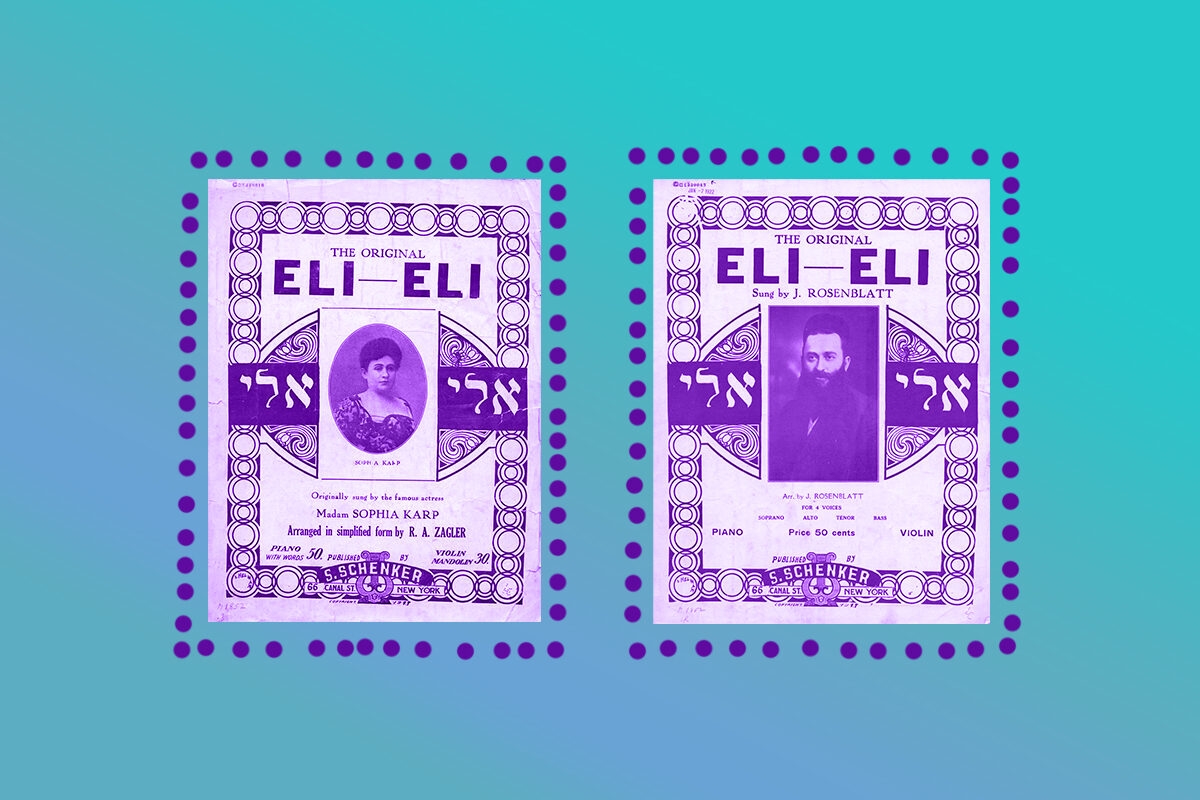 What makes one person tick is totally subjective, but science confirms that people are hard-wired to respond to music. It lifts our moods, eases pain, and triggers powerful emotions.

Some songs become so popular that they transcend their original meaning. Take “I’ve Been Working on the Railroad” — today it’s known as a popular children’s folk song, but the lyrics’ origins lie in caricaturing Black dialect, and it makes light of the abusive and exploitive conditions Black laborers endured. More recent examples include patriotic uses of Bruce Springsteen’s “Born in the U.S.A.” — it’s actually about a Vietnam vet’s desperate situation — as well as the popular wedding song by the Police, “Every Breath You Take,” which is really about an obsessive, jealous ex.

Sometimes, songs that describe a plight of a particular group can become a soundtrack for a different plight for a different people. “Eli, Eli,” a Yiddish song first popularized in the 1920s, is one such example. Though the song describes a Jewish person’s persecution due to her faith, it was later embraced by Black jazz singers like Duke Ellington and Ethel Waters, who were drawn to the somber melody and feelings of despair and oppression that the lyrics evoked.

This song — not to be confused with Hannah Szenes’ song/poem, “A Walk to Caesarea,” which is commonly called “Eli, Eli” as it shares the same first line — rose to prominence among African American musicians, though it was first composed by Jacob Koppel Sandler in 1896.

Its lyrics are drawn from the Book of Psalms 22:2, in which King David laments, “Eli, Eli, why hast Thou forsaken me?” (“Eli, Eli, lama azavtani?”). This iconic phrase is repeated twice in the New Testament: in Matthew 27:46, and again in Mark 15:34, marking Jesus’ last words as he’s crucified. Revered by both Christians and Jews as an exclamation of despair, Mizrahi and Sephardi Jews also chant the psalm on Purim for the Fast of Esther.

Sandler wrote “Eili, Eili” (an alternative Yiddish spelling) for a Yiddish operetta, in which a Jewish girl sings a song of despair while being crucified for her faith. The song begins in Hebrew, is followed by Yiddish lyrics, and concludes with the Shema prayer. Here’s an English translation of a portion:

In Fire and flame have men been tortured
And everywhere we went we were shamed and ridiculed
No one could make us turn away from our faith
From you, my god, from your holy Torah, your law!

In 1917, the public caught wind of this haunting Yiddish tune when the popular Jewish contralto Sophie Breslau performed it with New York’s Metropolitan Opera.

From there, Sandler’s composition was republished by various artists and, by 1927 the popularity of “Eli, Eli” was fueled by Cantor Josef “Yossele” Rosenblatt. He wrote his own version for The Jazz Singer — the first ever motion picture movie with music — with Al Jolson as Jakie Rabinowitz, a cantor’s son who just wants to make jazz music (albeit, yes, in blackface). Of the cantor’s melancholy melody, a critic wrote: “When Yossele Rosenblatt chanted ‘Eili, Eili,’ angels in heaven seemed to sing along with him.”

When the Black Jewish musician Willie “The Lion” Smith covered “Eli, Eli,” he catalyzed it as a standard cover for Black artists. (In fact, he knew the melody and Yiddish diction so well that he corrected a performer singing with the Duke Ellington Band.) The Jewish publication The Forward published a cartoon in the 1920s parodying the fad: Dubbed “An Upside Down World,” a Jewish cantor sang from Aida while an African American man, donning a kippah, sang a Yiddish song. The cartoon was meant to illustrate the bond between two vastly different communities who shared a common identity as outcasts.

According to Jeffrey Melnick in his book, A Right to Sing the Blues, the song’s “expression of faith in most training circumstances” are what turned African Americans onto this Jewish tune.

The performance of the song by Black people “mirrors the historical process by which African American slaves, instructed mostly in New Testament Christianity, found their deeper associations with the Israelites of the Old Testament,” Melnick writes.

African American actress and singer Ethel Waters added “Eli, Eli” to her repertoire in the early 1920s, after hearing the amazing response George Dewey Washington received for his version of the song. “It tells the tragic history of the Jews as much as one song can,” Waters said, “and that history of their age-old grief and despair is so similar to that of my own people that I felt I was telling the story of my own race, too.”

When Jules Bledsoe, one of the first African American artists to secure regular work on Broadway, performed “Eli, Eli” in 1929 at the Palace Theatre in Yiddish and Hebrew, he “threw the house into a white heat of appreciation” and performed “Ol’ Man River” as an encore.

Incredibly, this Jewish song of sorrow didn’t lose its fire over the years: In 1951, iconic Black jazzman Lionel Hampton (and his orchestra) performed a beautiful rendition of Sandler’s original song.

As African American singer and political activist Paul Robeson told Hasia Diner, responding to a question about why he performs Yiddish music like “Eli, Eli” but not French, German, or Italian works: “I do not understand the psychology of these people, their history has no parallels with the history of my forebearers who were slaves. The Jewish sign and tear are close to me.. I feel that these people are closer to the traditions of my race.”

In 1958, African American and Native American singer Johnny Mathis featured the “Jewish Folk Song” on his album, “Goodnight Dear Lord,” which debuted on Billboard’s list of the 25 Best-Selling Pop LPs in the States.

“I’ve always felt a kinship to all religions,” Mathis said. “I was never concerned about what kind of religious music I was singing. What mattered was that it gave me a lot of satisfaction.”

In the face of racism and anti-Semitism, Black and Jewish people harmoniously wailed this song of despair for more than three decades, a trend that seemed to fade in the 1960s when, as commonly believed, “the once wonderful alliance dissolved and split,” as historian Marc Dollinger told NPR. The reality of this “split” is rather complicated, but, as he explains, the rise in Black nationalism in turn inspired Zionism among American Jewish youth — an event further catalyzed by Israel’s victory in the Six Day War.

“The consensus of the 1950s that was Blacks and Jews together became a new consensus of the late ’60s and ’70s, with each of the communities doing the same thing apart,” Dollinger said. “And I saw that both communities were borrowing back and forth through nationalism as a consequence of the rise of Black power.”

In the past few weeks, fueled by the murder of George Floyd, enraged Americans have taken to the streets to protest police brutality and inequality. As Jewish activists, organizations, and community members alike rise up to demand justice for Black Americans, perhaps we are returning to that “wonderful alliance.” How beautiful would it be to revive “Eli, Eli” — the shared cry for justice — as a protest song? With its powerful lyrics, every somber note underlies the irrefutable fact that Black Lives Matter.