Empathy Isn't Enough For Black Jewish Families Like Mine. We Need Action. – Kveller
Skip to Content Skip to Footer

Empathy Isn’t Enough For Black Jewish Families Like Mine. We Need Action. 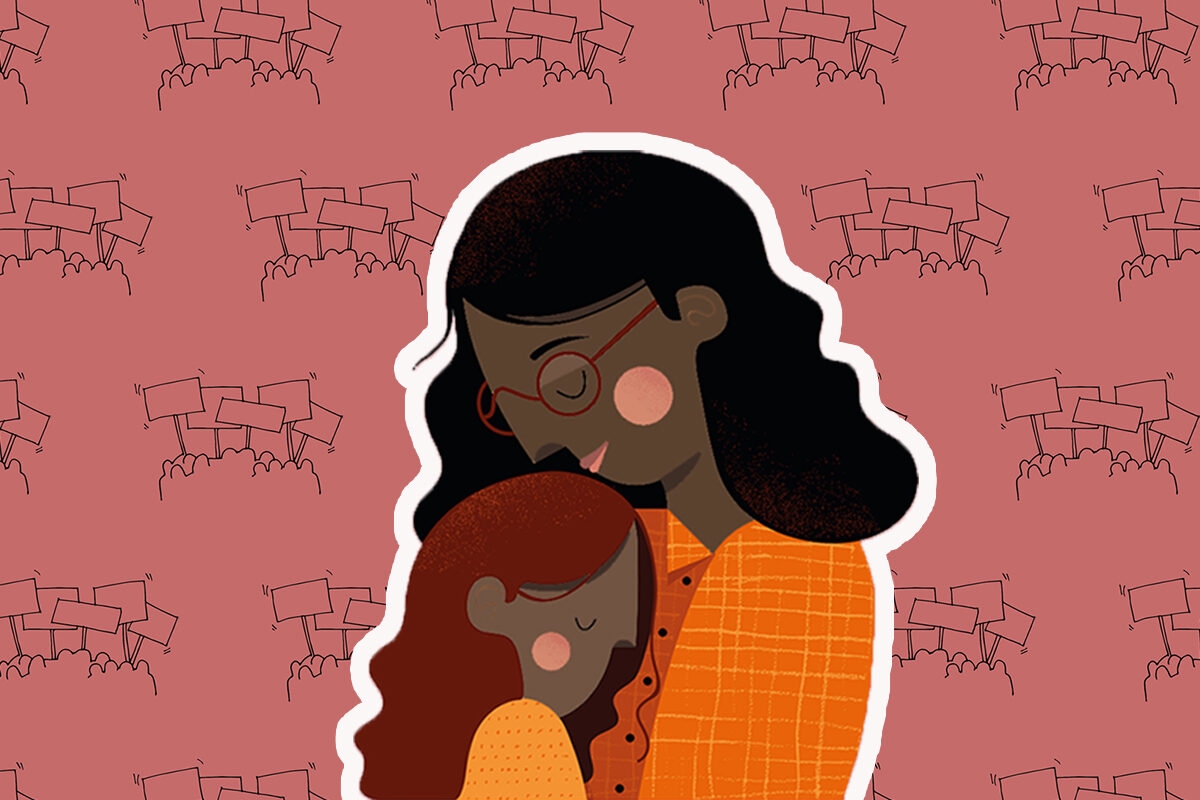 Our daughters are 10 and 12, ages in which we’re beginning to discuss current events with them on a more serious and mature level. However, in an attempt to shield them from the ills of the world, I initially refrained from sharing the most gruesome parts of what happened to George Floyd on May 25 in Minneapolis.

Here in Israel, where we live, school resumed three weeks ago. We live in a community with many Anglos where world and U.S. events are often discussed by our daughters’ peers and, occasionally, their teachers. Our conversation started after school one day, when one of their schoolmates made comments that included both flat-out falsities — “George Floyd was killed because he killed someone in the store?!?” — as well as negative statements about Black people in general.

My older daughter knew that what her friend was saying was wrong, but lacking details about the incident, felt she wasn’t equipped with the tools to make her arguments. Well, reality forced my hand. And so I shared the facts of what happened to Floyd with both of my girls, stealing a little more of their innocence in the process. Emotions were high, and immediately there were tears on all three of our faces. In reference to the officer’s actions, my youngest exclaimed, “How could he do that?!!”

I couldn’t help but think that my children immediately recognized this behavior as wrong. So how did adults fail so miserably?

The three of us had a long, candid discussion about racism. Hardly our first, though every time we talk about it, I pull back a little bit more of the curtain, gauging their readiness to hear more. We discussed current events in the U.S, my experiences as a Black and Jewish woman over the years, and their thankfully few own experiences with racism and prejudice. The conversation ended in me reiterating how loved, unique, special and strong each of them is, and I made one thing clear: I won’t ever tolerate anyone making them feel small.

The events of the past few weeks have been hard to take in. I’ll admit that I couldn’t make it to the end of the video of the brutality that led to Floyd’s death the first time around — my heart pounded and my whole body became tense. I didn’t want to watch yet another man get murdered before my helpless eyes. Too many… and how many more? My entire existence has been weighed down by the burden of all that have walked before me, in skin like mine. The abuses and cruelties they’ve faced; the baseless hate, fear, oppression, rejection, discrimination, scrutiny, bias, prejudice, slavery, violence, and ongoing injustice. It’s a heavy cross to bear.

But this case feels like the proverbial straw that broke the camel’s back. The winds of change are palpable, a line is being drawn in the sand, and a movement is being ignited across the U.S. and the world. I’ve never called America my home — I grew up in Toronto — but racism isn’t unique to the U.S. I see it, I’ve experienced it, and I know what it feels like.

If you are not a Person of Color and you’re wondering what this feels like, I’ll offer an example others might relate to more freely: As a woman, I keenly understand walking around with fear for your life or for your person, of avoiding threatening situations. It’s going about your days with the weight of that consciousness — of feeling unsafe in your surroundings, or having to justify your existence or presence. It’s heavy and it’s exhausting.

When it comes to Black Lives Matter, I don’t need a movement or a hashtag to reaffirm what I already know: The skin I live in is defined as Black, and it is an integral part of me. For better or for worse, it has been a defining force that has made me who I am. I’m alive, I deserve to be alive, and my life matters — of course Black lives matter! The fact that this still needs to be said aloud in 2020 proves just how little progress we’ve actually made.

As a Black Jewish woman, I have known otherness, prejudice, and racism all of my life. Some of it subtle, some of it less so. I’ve been called the N-word to my face — as an introduction, completely out of the blue, and by someone I lived with for a year and never had any prior issues with. I’ve been the only POC in the room when racist jokes or opinions have been shared — more times than I can count — and not ONCE has anyone spoken up in defense of people who look like me.

Left alone with the burden of speaking up against ignorance — or, more often than not, feeling like I didn’t want to “make a scene” — I’ve plastered smiles on my face while quietly stewing in my own anger. I’m sure many others can echo this sentiment; sometimes it’s easier to grin and bear it, in silence. Easier in the moment perhaps, but the piercing feeling in your heart only grows.

I’ve grown a thick skin, and willfully promote the idea that nothing can penetrate it. I hate confrontation and I often avoid it, at my own cost. Every incidence of not sticking up for myself, chips away at my feelings of confidence and self-worth just a little more.

I don’t speak for an entire people, nor would I ever assume that role. I only share the world through my own eyes, experiences, thoughts, and feelings. If life has taught me anything it’s that labels never serve us well — we humans are diverse, complex, and complicated beings, many contradictions can exist within us. One thing is static, though: We all deserve basic human rights and to be treated equally by the law. Any system that was built on inequality deserves to be dismantled and for a better, more inclusive one to be built in its place. Just because one or more parts of society cannot see the crack from their vantage point doesn’t mean it isn’t broken. If the foundation a home is built upon is flawed, it might hold for a great long while, but eventually that house will collapse.

America, your home is crumbling. You can choose to take it apart, brick by brick, to reassess which to keep, or replace, and work together to rebuild a newer, improved, and better society. Or you can watch it all fall to pieces. In any event, we’re all watching to see what you’ll do.

Whatever the outcome is, it will have a rippling effect on us all. I try to approach all things with sensitivity. My origins, my upbringing, and my life experiences have funneled into feelings of empathy for people from all walks of life. If you dare to look, you can find resemblances and reflections of yourself in everyone you meet. I’m teaching my daughters about love and respect for all peoples. But these aren’t enough to evoke change — action is required.

Walking with one’s head held high — proud and free of fear — should never be defined as political. In a just society we already know we can’t act as judge, jury, and executioner. And yet, acts like this — an innocent man’s life being taken by the people sworn to protect and serve it — keep slipping through the cracks, and in many cases are even widely justified. No need for conventional weapons, like guns or knives — knees have now been weaponized! No one deserves to have their life casually snuffed out, through desperate pleas of both the victim and the onlookers, frozen into inaction.

What can you do? Listen to the countless voices of Color sharing their experiences, with an open mind and heart, and realize your own experience isn’t absolute. True understanding is born from experience, but empathy is the next best thing.

If you’re my friend, family member, or neighbor, please check your own opinions, and possibly the bias — or worse — that you’re instilling in a new generation of people. My kids don’t need to go to school to hear that “all Black people are criminals” or other choice remarks. Be an ally, speak up and out, and when you see or recognize an injustice, remember what Dr. Martin Luther King famously said: “Injustice anywhere, is a threat to justice everywhere”.

Most importantly, DO something about it.

What am I doing about it? I’m stepping out of my comfort zone, out of my preferred place of anonymity. I’m baring my heart and soul to take a stand and say that this treatment of one half of the people who make me who I am can’t go on any further. I’m sticking up for myself, and for all who look like me. I’m reclaiming my voice. And using it.