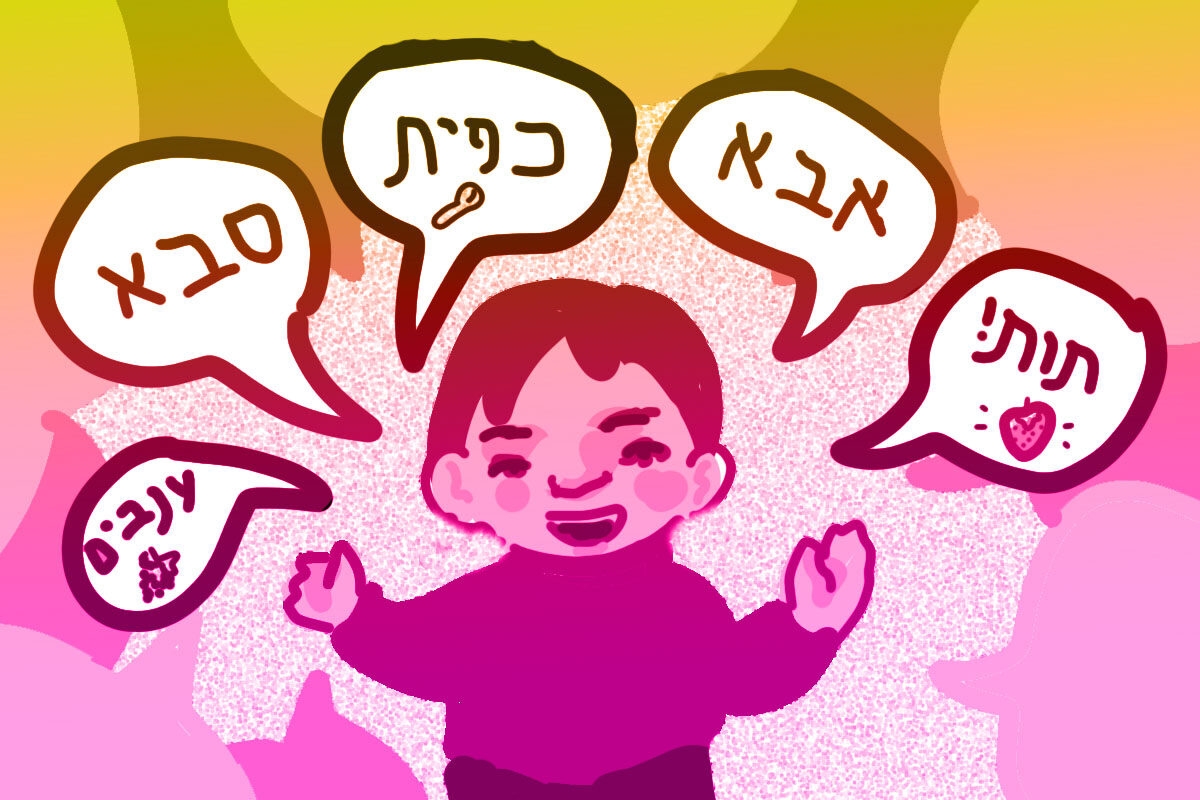 Growing up, my father and I used to play a guessing game. The catch is, he didn’t know we were playing a game. He just thought we were speaking his native language: Hebrew.

“Can you get the anavim from the fridge?” he’d say and I’d open the refrigerator door and stare. I’d breathe in the cool air, praying I got it right. Not just for him, but for me, too. I knew he either meant the grapes or the tomatoes. I could never tell the difference. To me, they sounded the same, and both started with an A.

He’d look over, and see me struggling. I’d slowly grab the grapes, looking back at his reaction, and he’d subtly nod in agreement. “Yes, I got it right!” I’d think to myself. “One bunch or two, Dad?” I’d ask loudly and confidently, pretending that I always knew what he meant, even if I couldn’t adequately distinguish between anavim (grapes) and agvaniyot (tomatoes).

I know it bothered my father that I called him “Dad,” like all my American friends did, and not “Abba,” which means “father” in Hebrew. I didn’t mean to reject his native language that he so desperately tried to teach me. But I wanted to be like the other kids, so I did.

Fast forward many years into adulthood, to my own amazement, I married someone who spoke Hebrew. I began to more fully embrace my heritage and the language that came with it. Before I gave birth to our daughter, who is now 14 months old, I’d find myself googling, “The best way to raise a bilingual baby” — right alongside the basics, like, “How to swaddle a newborn.” I surprised myself, but for reasons I couldn’t quite explain, it became imperative to me that our daughter grow up accepting the language I rejected.

But when our baby was just 9 months old, my father died after a long, fierce battle with cancer. Although I wished I could turn back time and embrace his language, our baby gave us a new chance. I may have never called him Abba, but his three grandchildren, one from each of his three children, know him as Saba, which means Grandpa in Hebrew. At 14 months, our daughter hasn’t said that word yet, but she’ll point to his photograph when I say, “Where is Saba?”

Speaking Hebrew in our little family of three is a way to ensure my father’s language and culture live on. Now, at least once a day, I remind my husband to speak to our daughter in Hebrew. Sometimes he forgets, and sometimes he starts off in Hebrew, but falls into English so others can join in the conversation. Hebrew isn’t even my husband’s first language — he was born in America, but grew up in Israel. Nevertheless, I’m determined to ensure our daughter becomes as close to fluent as possible. But I worry that, like me, she’ll reject it — l’dor v’dor, from one generation to the next.

When I was a kid, my father would usually begin our conversations by speaking Hebrew. But I’d always answer in English, and sooner or later he’d give up and switch over to English as well.

“Nu, Eich haya hayom shelach?” he’d ask about my day after picking me up from dance class.

My dad’s first language was actually Arabic, as his parents fled from Syria to Israel in the 1940s. When he began school at age 5, he said he felt like an alien because he didn’t understand a word the teachers or children were saying. He quickly learned Hebrew, and taught it to his parents. He learned English at 21 when he met my mom, his American bride.

I have over 30 first cousins on my father’s side, and I’m the only one who isn’t fluent in Hebrew. I’ve always struggled with my unequal parts. I grew up in America, never feeling fully American, but didn’t feel totally Israeli either. My American mother was polite and known to correct our grammar and posture, while my Israeli father valued food and family over all else. Making plans in advance or being on time was unheard of at our Israeli family gatherings, but everyone would show up (sometimes unannounced) and stay for hours. I’d listen to the long, fast conversations happening between my aunts and uncles in Hebrew, trying my hardest to catch every few words.

My dad always had a thick Arabic accent. He couldn’t really pronounce R’s, and always made words plural when he didn’t mean to. “Can you turn on the televisions?”

“It’s television, Dad, there’s only one,” I’d say with a condescending tone.

Once I realized not everyone’s father had an accent, I started resenting him. I wanted to be the same as everyone else, not different. My father attended my third-grade science fair because my mother had a meeting at work. We walked around together and I showed him my classmates’ science projects. “How interestings,” he said when I showed him my friend Jessie’s creation. Embarrassed by his accent and grammatical errors, I whispered to Jessie, “He’s foreign.” My father heard me, and I’ll always remember how hurt he looked.

I could get by in Hebrew when I needed to. “Efo ha sherutim?” I could conjure together when I needed to use the bathroom. Or “Kama ze ole?” when I saw something I wanted to buy and needed to know how much cash to take out. I can follow along in conversations, but I’m rarely confident enough to insert myself into one. I was always embarrassed and scared to make the same mistakes in Hebrew that my father made in English.

When my husband and I are out, and I want to tell him a secret, I look over, desperately trying to get the words out. In those moments, I so wish I soaked up the language rather than bury it so far down that I can’t even find it. I wish I could say something to him that would make sense. I try, piecing together a few random words. He sees my struggle, answers in Hebrew, and encourages me to keep going. Eventually, I run out of words, and we switch back to English.

Most mothers cringe when their child’s first word isn’t “Mama.” But when our tiny little daughter shouted her very first word, “Abba,” we were both brought to tears. And I can’t help but smile proudly every time she screams “toot!” when she sees a strawberry. The language I dismissed as a child has become my most important treasure as a parent.

These days, my daughter and I sit and play our own language guessing game. I take out the lettuce, or “letters” as my dad would mistakenly say. “Chasa,” I say, “That’s what we call ‘lettuce’ in Hebrew.” I’m not the parent who’s supposed to be speaking Hebrew to her, but I do it anyway, as much as I can.

When I’m feeding her, and I’m unsure if I’m getting the words right, I shout out so my husband can hear, “How do we say fork in Hebrew?”

“And we use our kapit to eat our soup,” I say proudly.