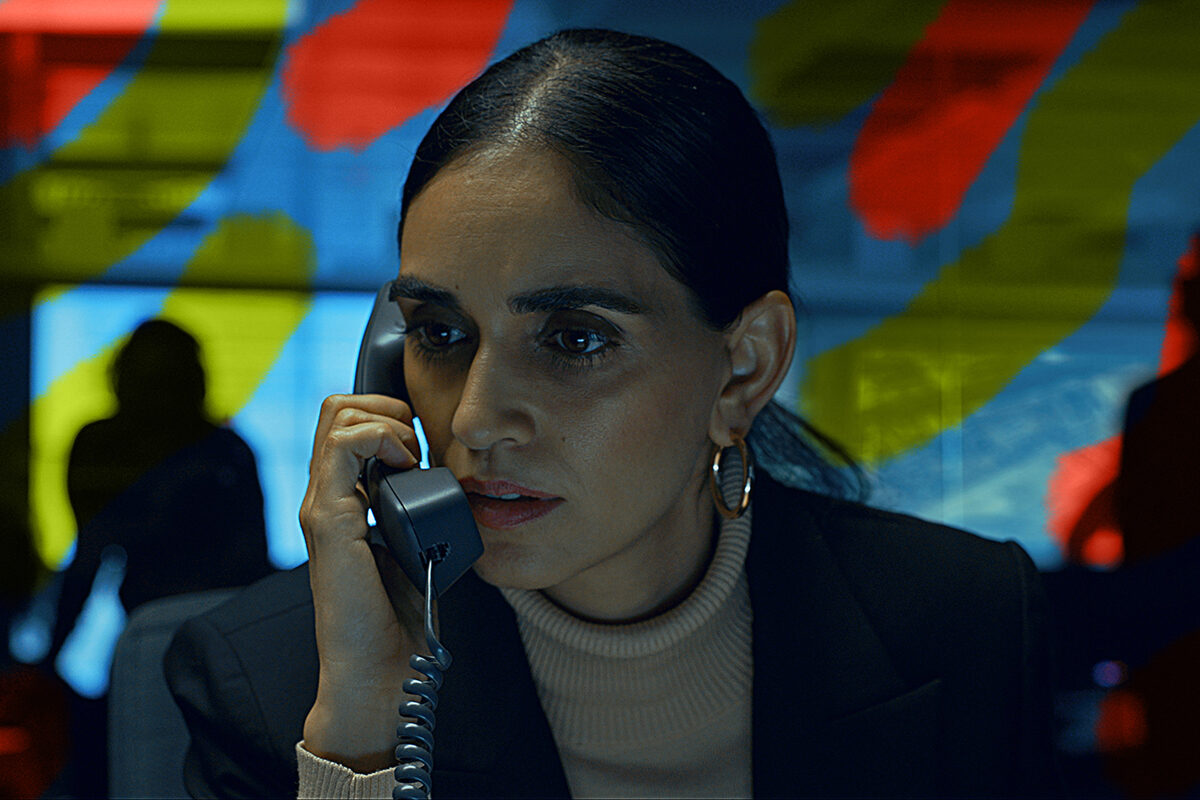 It took Liraz Charhi, a veteran Israeli actress and singer, many years to start singing in her mother’s native tongue: Farsi.

After two Hebrew language albums, countless plays, and various movie and theater roles, Charhi just couldn’t deny the language of her childhood anymore. It was, she tells me, “like a baby that fell inside my arms and said, ‘OK, you have to sing your grandmother’s songs to me.'”

“My parents thought I’m crazy,” she says. “And my managers here told me, ‘Oh you’re going to sing in Farsi, you know it’s a niche,” and I said, ‘Yes, I want to be in the niche. I’m like looking forward to go to the niche.'”

Turns out Charhi’s niche isn’t so small. In addition to her music — Charhi is releasing her second Farsi album, “Zan” (“Women”), this year — she’s speaking the language in the Israeli blockbuster show Tehran. In the series, is now streaming to global audiences on Apple TV+, Charhi, 42, stars as Mossad agent Yael Kadosh — an Iranian expat, herself.

Charhi’s journey with Farsi began about five years ago when she lived in Los Angeles and worked in movies like  A Late Quartet (with Philip Seymour Hoffman). Walking down what she and many of LA’s estimated half-million Iranians lovingly call “Tehrangeles,” she says she felt the closest to something she had long longed for: to stand on Iranian land; the land her parents left when they were children, in the ’70s, before the revolution — a land that maybe didn’t exist anymore. A land that she only knew from the news as a place of strife.

Every time she flew back to Israel, Charhi traveled back with overstuffed suitcases, filled to the brim with Farsi records — but not the same kind of Farsi music she grew up with. Instead, this music was sung by courageous women, with fiery, powerful Farsi lyrics. These singers — like the amazing Googoosh — presented a sharp contrast to, say, her grandmothers, who were married and became mothers while still in their teens, never fulfilling the dreams they had for themselves.

Charhi was smitten by this music. “It got inside my heart immediately,” she says. “Then I understood my whole story. It took me a while to understand why am I attracted to this music, why does it fit my heart? …  I needed to make a closure with my personal story, and to make my own private revolution.”

“It wasn’t very easy for me to grow up in a house that women got so much attention to how to be polite, how to be beautiful, how they have to act,” she says. “And when they want to break their own walls, and to speak up and to raise their voices, men said, ‘OK, you have to stop.'”

And so, Charhi sings in Farsi — for her grandmothers, whose aspirations, to be singers, to have careers, were all muted; for other countless women like them; and for the Iranian people as an attempt to bridge these two worlds that always felt so contradicting, when she was a child — the insular Iranian reality of these women she loved and the freedom she found outside their world, in Israeli society, and in Tehrangeles. She breaks the walls of the home she grew up in, exposing the language that she secretly loved but dared not speak in her youth, and lets the whole world into her vision of what Iranian music is — and what it can be. The result is powerful, feminist, innovative music that’s also a gorgeous and reverent ode to the Farsi language.

Since her first album, “Naz,” came out in 2017, she’s toured the world, singing her “niche” songs to international crowds. Her video for the song “Ameneh” from that album is a collaboration among Iranians all across the world (though not in Iran), who filmed themselves singing and dancing to the song:

Charhi’s music is inherently feminist — and it resonated strongly with Iranian women. “I understood that lots of Iranian women are listening to my music… I get a lot of support from them,” she says. “Because it was very, not natural to watch me, you know, an Israeli actress and singer, who has freedom with everything she does with her art, singing, dancing, acting, not covering herself. I get a lot of support, like, ‘You go girl and raise your head up and speak for us.'”

That feminist message is one that also hopes to pass on to her two daughters, ages 2 and 6. On the one hand, Charhi finds it very important to raise them with their culture — they eat the Persian food she cooks for them, and they sing Farsi songs with her. She has given them Farsi nicknames — her oldest is Joon, which means “my soul.”

But on the other hand, it’s very important for her that they see her working and chasing her dreams. “My daughter said, ‘Why can you just stop because it’s Covid and it’s a fragile situation… why can’t you just stop  like my girlfriend’s mother just work from home?'” Charhi recounts. “And so I [tell] them that I’m working from home now but sometimes I have to go out because I have the opportunity to continue doing what I’m doing. Because it’s always very easy to give up.”

Like her character in Tehran, Charhi grew up torn between two kinds of cultures: The conservative Iranian culture inside her home, and the liberal Israeli values outside it. When her parents spoke Farsi to her, she answered back in Hebrew: “I was so shy about it, because, you know, my neighbors, my friends, they didn’t know Farsi,” she says. There was always a push and a pull, between wanting to be Israeli and wanting to acknowledge her roots.

“Yael Kadosh, the role I’m playing in Tehran, has the same story as myself,” she says. Like Charhi, Yael is a badass feminist — though, instead of music, her character is trying to prove herself as a handler to Tamar Rabinyan (Niv Sultan), who’s sent to Tehran on a dangerous mission to deactivate their nuclear reactor.

Charhi describes her character as “a Mossad agent who needs to prove herself and build herself in a very masculine environment.”

As for “Zan,” it is a collaborative album, of the riskiest, boundary-breaking kind. For every song on the album, Charhi collaborated with musicians in Tehran, communicating on clandestine apps like Telegraph. The process was truly nerve-wracking, she says, but at the end realized, “We’re not living in peace, [but] we’re all human and love each other.”

In one of the songs in “Zan,” “Zan Bezan,” (“Woman, Sing”), Charhi collaborated with a female Iranian percussionist. “It’s a revolution song,” she says. “For all women to enjoy being women to raise their heads to speak up to break their own walls.”

It was inspired by the Iranian women who filmed themselves taking off their hijab in public spaces. “It’s beautiful to watch,” she says. “And I really think the revolution will come from us ladies. And the song is about that.”

Her worlds all came together when her collaborators alerted her that the first five episodes of Tehran actually leaked in Iran before its premiere. “They actually translated to Farsi and they saw episodes with Farsi subtitles,” she says. “It was crazy. People in Iran.. are watching the TV series before us — this is madness. I feel like my whole story got really connected to each other.”

However, Charhi’s character in the show is a bit more complex than that — no spoilers here, but you have to watch the entire season. “The whole story of each character in [Tehran] is that you don’t know how their emotions are involved with which side; which side they prefer or don’t,” she says. “It’s a big question mark, I think for each one of us who has Iranian roots.”

In fact, both Charhi’s gorgeous music and the entrancing story of Tehran pose that same question: Can you be both? Can you be Jewish and Iranian? Iranian and Israeli? And can you be all those things and be a feminist?

While the show fails to provide an answer to that question, what Charhi — in her music, her life, and her career —  comes up with is, yes. “I think that the minute I understood that I don’t have to embrace one side — you know, my heritage is me, and myself today, is me,” she says. “I’m creating this big TV series with Iranian actors from all over the world and creating an album with Iranian people from Tehran. Anything is possible when you are not judging any side, and you’re not judging yourself. My own identity is not one thing. It’s a layer upon layers of circumstances and cultures. And that’s the main beautiful thing with us people.”