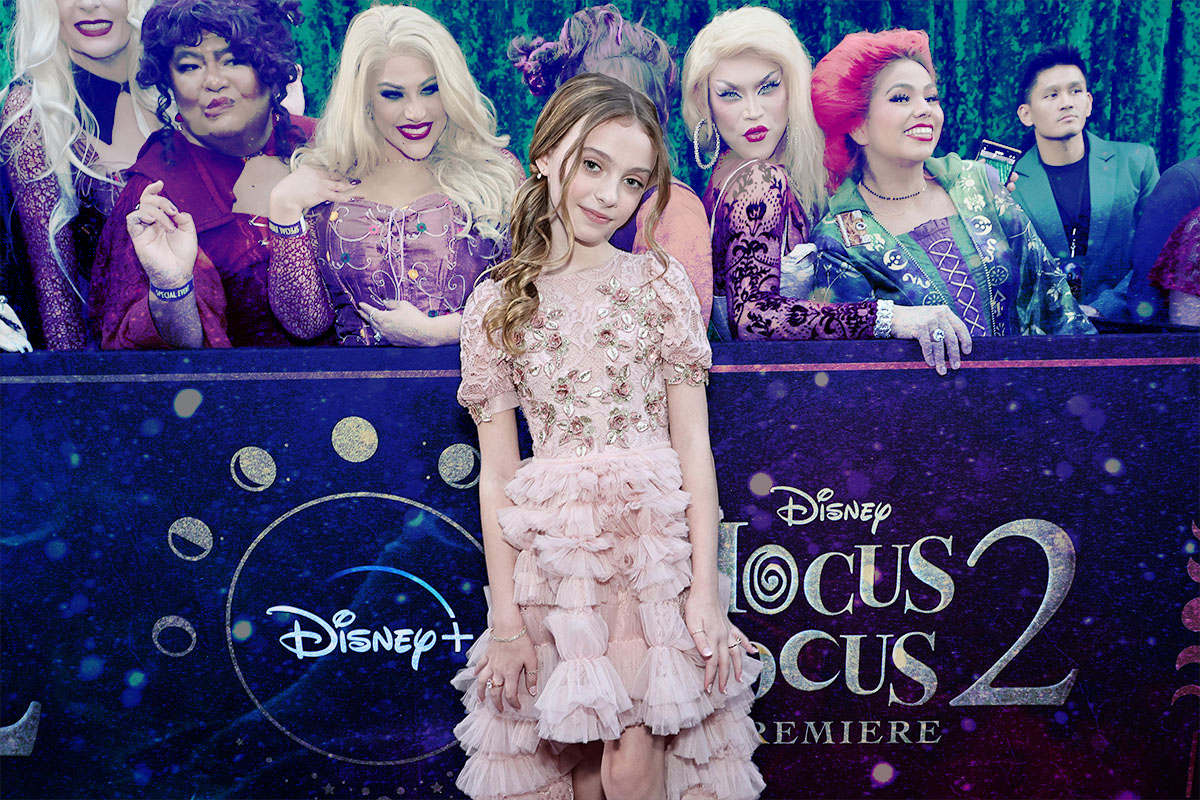 by Jamie McCarthy/Getty Images for Disney

Juju Brener is excited to go to Disneyland this month. Sure, she went there when she was a baby, but she doesn’t remember it a decade or so later.

Juju, whose birth-name is Journey, won’t be the average 10-year-old visiting the popular theme park — she will be there to celebrate “Hocus Pocus 2,” the reboot of the much beloved 1993 Disney movie, and the company’s biggest film of the season. Juju stars in the movie as young Sarah Sanderson — that’s right, she plays the kid version of Sarah Jessica Parker‘s witchy character.

While she may be the most diminutive of the three actresses who play the witches’ younger selves, Juju definitely doesn’t feel small on the screen as a bright and spritely child-witch in 16th-century Salem. And she is actually quite an experienced actress — already having acted opposite Morgan Freeman in the movie “Vanquish” and starring in the Miley Cyrus music video for “Younger Now.”

Kveller talked to Brener from her home in Los Angeles, where her mother, Shirly Brener, was sitting by her side, sometimes helping refine answers or remind Juju of things (like the fact that she’s already been to Disneyland!). She’s also a reminder that Brener is part of a Jewish acting legacy.

Israeli audiences (this writer included!) know both Shirly and her mother, Smadar — Juju’s grandmother, who starred in the cult 1978 Israeli hit “The Band” as Yaffa “Yafchuk.” Shirly, a working actress, is known for her role in the beloved Israeli soap “Ramat Aviv Gimmel” and for starring in the 2013 season of “Mehubarim Plus,” a critically acclaimed Israeli docuseries that follows the life of Israeli creatives. Shirly and her husband, Bruce Rubenstein, an artist and producer, starred in some of the most memorable scenes of that season. In fact, Juju also appeared in the show as an adorable curly haired toddler — along with her sister Mila, who is now 17 and also a working actress.

The last time Juju was in Israel was actually for the series’ premier. “I was like, a little baby, so I don’t really remember it,” Juju says. “I want to go again so I can actually experience it.”

Both Shirly and Smadar have helped counsel the girls in their acting ventures — as Shirly says, she’s riding on 40 years of acting experience. But Juju and Shirly tell me that it was Mila who was the most impactful in helping prep her little sister for the role in “Hocus Pocus 2.” Mila is currently applying to film school, has acted in TV shows like “Moms” and Ray Donovan,” and has a prolific voice acting career (most recently, she was in the beloved “Pete the Cat” series).

“She helps me with like everything,” Juju says of her oldest sister. “My auditions and my scripts that I have to memorize — she just helps me with the roles.” And because Mila is old enough to have a license, she even drives Juju to her auditions.

Another thing the family does together? Halloween, which is their favorite holiday.

Every year, Juju, Mila, Bruce and Shirly dress up together in a themed family costume — they’ve done the “Addams Family,” “The Walking Dead” and Juju’s favorite theme, heaven and hell. This year, Juju is dressing up with her friend as a Powerpuff Girl. Her mother Shirly tells me that one of their favorite parts of the movie premiere was seeing drag queens dressed up as the Sanderson sisters.

Juju just generally loves scary things — scary movies like “The Purge” and roller coasters (she’s a big Six Flags fan). One frightening thing she doesn’t like, though, is bugs, especially spiders. “Whenever I see one, I just get really scared,” she tells me. Unfortunately, she had to get pretty acquainted with spiders during the “Hocus Pocus 2” shoot, in which the sisters offer Winifred a spider for her birthday.

“We had to do spider training and I had my sleeve down because I was too scared to have it on my bare hands.” But at a certain point, her fear subsided. “I opened my sleeve and I let them walk on my bare hands. And it wasn’t too bad. It was just tickly.” Juju said that the team who brought the spiders in even offered to name one after her.

But her favorite memory from the “Hocus Pocus 2” set was during a rainy and muddy day. “My shoe fell off while running in the mud, and then we all tripped all over each other like a stack,” she laughs. She said this happened twice and it was “really, really funny.”

Another great part of starring in the movie was meeting Parker, who is one of Juju’s idols. Because the two didn’t actually star in any scenes together, they met for the first time at the premiere, where the “Sex and the City” actress fawned over Juju’s ruffled pink dressed and told her she looked so beautiful:

When they’re not on set, Juju’s family is a typical Jewish one who celebrate the holidays — Juju’s favorite is Passover. Every year, they get together with the family of one of her mother’s best friends, an Israeli chef. This year’s seder was especially memorable for Juju — she finally was the one to find the afikoman.

While she has no memories of Israel, Juju loves Israeli food. “Couscous is one of my favorites, falafel, pita,” she lists off, then turns to her mom and asks, “What’s the salad called?”

“And I also love matzah ball soup,” Juju adds. “Now I’m going to start craving all of that! I’ve been meaning to find some.”

Juju and Mila also love Japanese food — ramen and sushi are their favorites — as well as Japanese culture. They dream of going to Japan. “I hope I can go for my bat mitzvah,” Juju tells me.

The young actress already has more projects coming up. She’s about to star in another sequel, “Born Again,” a follow-up to the 1987 “Born in East L.A.” Juju also just launched her first jeans line — quite a feat for a preteen! It’s called Juju X YMI, and it’s a partnership between the actress and the Israeli-owned jean company that sells at TJ Maxx and Marshall’s. Juju says she asked the company to make jeans that she and her friends wanted to wear, from flared bottom jeans — their favorite — to yes, mom jeans.

Juju’s dreams is to play a “Mean Girls” type character and to star in a Steven Spielberg movie. “I love his movies so much,” she says. With how her career is going right now? That seems totally attainable.