16 Spooky Jew-y Movies That Are Perfect for Halloween 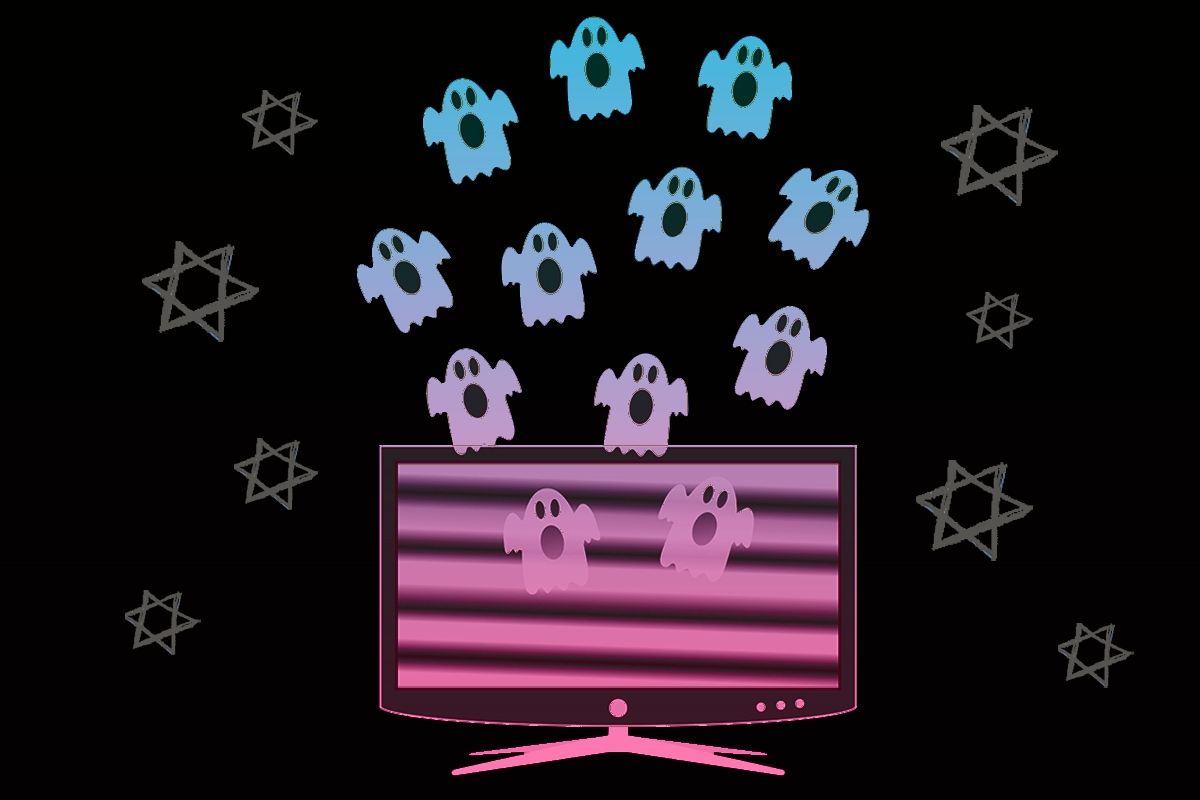 Why is this Halloween different than all others? Well, unfortunately, the Covid-19 pandemic has upended so many traditional October 31 activities. Parties and parades are canceled, and many families are taking a hard pass on trick-or-treating, for fear of exposure to the deadly virus.

But don’t fret: It’s still possible to have a fun Halloween at home. In addition to Halloween-themed crafts, baking projects, or living room dance parties — you can also take a page from the “Jewish Christmas” book and settle in for a cozy evening of holiday-themed movies.

True, Halloween is not a Jewish holiday — in fact, though it may be an all-American tradition, it has pagan and Christian roots. Still, there’s a surprising variety of Halloween-themed movies that have significant (though varying) degrees of Jewish influence. From classic Halloween flicks to horror movies with Jewish themes, here’s a comprehensive list of Jewish (and Jew-ish) Halloween movies to watch — including films that work for the entire family as well as those that are best for after the kids have gone to bed.

This new Netflix original movie stars Adam Sandler as the notably Jewish Hubie, an eccentric community worker in Salem, Mass., who gets wrapped up in a Halloween murder investigation. As noted in a recent Kveller article by my colleague Lior Zaltzman, Sandler, who produced and starred in the film, dedicated the film to the late Cameron Boyce, 20. Boyce was supposed to play a bully in the film but passed away shortly before filming. The film also stars Jewish actress (and A-plus Kamala Harris impersonator) Maya Rudolph.

This 1990s classic, like the aforementioned Hubie Halloween, also takes place in Salem. The setting has a deeper significance in this millennial-fan favorite, as the main character, played by Jewish actress Sarah Jessica Parker, encounters ex-witches from the Salem witch trial era. The triumvirate of witches encountered by SJP includes Jewish icon Bette Midler. Catch it on Amazon Prime or Disney+.

Available to for rent or purchase on Youtube and Amazon Prime, Hotel Transylvania is a surprisingly parent-oriented film, about a vampire dad, Count “Drac” Dracula, who invites a bunch of famous monsters to celebrate the birthday of his 118-year-old daughter, Mavis. (Mazel tov!) The film features the voices of three prominent Jewish actors: Adam Sandler as Drac, Andy Samberg as Mavis’ love interest, and Fran Drescher as Frankenstein’s wife. Bonus: This fun flick also has 3 sequels.

Matilda is one of my all-time favorite books (despite evidence that its author, Roald Dahl, is an antisemite). The book-turned-movie is the story of a gifted young girl who learns to read before attending school, and ends up having magical powers. The film’s emphasis on education echoes Jewish values, as Matilda receives guidance from Miss Honey, who helps her learn as much as she can despite her unsupportive parents. The titular character is played by Jewish actress Mara Wilson, who has a sizable social media platform where she fights antisemitism and talks about her Jewish identity. As a bonus, Matilda’s mother is played by Jewish actress Rhea Perlman. This magical movie is available on Amazon Prime.

My favorite Disney channel movie series (behind High School Musical and Camp Rock) is the Halloweentown series. This film, similar to Matilda, centers on a young teen who learns she is actually a witch from her magical grandmother, played by Debbie Reynolds (AKA Carrie Fisher’s mom). Marnie, the protagonist (whose name means “rejoice” in Hebrew) goes through high school and college exploring the world of Halloweentown. The sequel to the first film, Return to Halloweeentown, stars Jewish actress Sara Paxton. Watch the series on Amazon Prime or Disney+.

First things first: Harry Potter himself is played by Jewish actor Daniel Radcliffe. What’s more, some Jews view the series as a sort of modern-day Torah.  “I did not attend religious school,” Rena Lubin writes on our partner site, MJL. “However, my mother did read me the Harry Potter books as bedtime stories…  I quickly became invested in the riveting tale detailing the magical adventures of friends, family, love, mystery and intrigue, deception, good versus evil… sound familiar?” Still the series must be taken with a grain of salt: The Goblins in the first installment feature antisemitic tropes, and series author JK Rowling has made multiple public transphobic statements. Catch various Harry Potter films on Amazon Prime and NBC’s Peacock.

The adventures of Casper the Friendly Ghost was first popularized in the 1950s comic books by Jewish artist Alfred Harvey. This 1995 film, a combination of computer animation and live action from Jewish director Brad Silberling, follows the sweet ghost in his spooky adventures. Fun fact: This film version is the first to feature a fully CGI character in the lead role. Watch Casper Amazon Prime.

From Israeli director Gil Kenan, Monster House is an animated kids’ horror movie about 12-year-old DJ and his two friends, who are terrorized by their crotchety neighbor’s haunted house. This spooky film is available on Netflix and Amazon Prime.

Based on the 1964 TV series by Jewish producer David Levy, this supernatural black comedy chronicles the eccentric Addams family as the reconnect with a family member who ends up trying to steal their fortune. Jewish cinematographer Barry Sonnenfeld directed the film, which became a Broadway musical in 2010. Stream it on Hulu or Amazon Prime this Halloween.

This iconic and somewhat spooky classic is perfect for Halloween. Directed by award-winning Jewish director Steven Spielberg, ET follows an extraterrestrial during his stay with a family, whose children help him return to his home planet. You can watch this classic on Amazon Prime.

Scary and/or Scandy — Best for Post-Bedtime

Coraline has a significant Jewish connection, as it is based on a 2002 novella by Jewish author Neil Gaiman. The film centers on a young girl who moves to a new home and finds a parallel world behind one of the walls (in which, spoiler alert, everyone creepily has buttons for eyes). I saw this film in theaters when I was 11, and it was scary enough that my younger sister and mom had to leave the theater while my grandma and I stuck it out (for some reason). If you dare, you can stream this film on Amazon Prime.

Streaming on Amazon Prime, Halloween is a slasher film perfect for getting really scared (after the kids go to bed, of course!). Starring Jewish actress Jamie Lee Curtis in her breakout role — her dad, Bernard Schwartz, was better known as Tony Curtis — the film follows a mental hospital patient who murdered his sister on Halloween, and then stalks a babysitter and her friends on Halloween a few years later.

Available to stream on Amazon Prime and Apple TV, The Golem is perhaps the most Jewish horror movie out there. Based on the the Jewish folktale of the Golem, a clay or mud figure that a rabbi brings to life in order to protect the Jewish community from harm, this Israeli film takes place in a 17th-century Lithuanian village. The protagonist, Hanna, attempts to build a golem to protect her community from the plague. The movie, writes Jessica Price on our sister site, Alma, is “less interested in the horror of the supernatural than the horror of living under the constant threat of pogroms.” Now that’s scary stuff.

This new Canadian Jewish horror film — with Yiddish dialogue! — takes place in a Brooklyn Hasidic community, where exile Yakov is tasked to sit up all night to watch over the body of a recently deceased Holocaust survivor. Filled with jumpscares, this film also explores the generational trauma of the Holocaust — as with The Golem, the real horror in Jewish horror films is human hatred. Though it isn’t Halloween-themed, this film is sure to spook you, to say the least. Stream it on Amazon Prime.

Aptly named, this gothic musical is about a geeky flower shop worker, Seymour (played by Jewish actor Rick Moranis), who ends up feeding his friends to his giant, talking Venus flytrap. Originally a Broadway musical, Little Shop of Horrors features music by Alan Menken, who also wrote the music for many Disney modern classics, including The Little Mermaid, Beauty and the Beast, and Aladdin. The screenplay was written by Howard Ashman, who also wrote the lyrics to the music for all the above films, and was directed by Jewish actor, director, puppeteer Frank Oz. Get snatched up by this fun flick on Hulu or Amazon Prime.

Starring iconic Jewish actor Gene Wilder, Young Frankenstein is a fun, campy parody of Mary Shelly’s Frankenstein, about the young scientist, Frankenstein, and his monster. This one’s filled with nods to Jewish culture from Jewish director Mel Brooks, including the pronunciation of Frankenstein as the Jewish sounding “Frank-en-steen.” This cult classic is available to stream on Hulu+ or Amazon Prime.