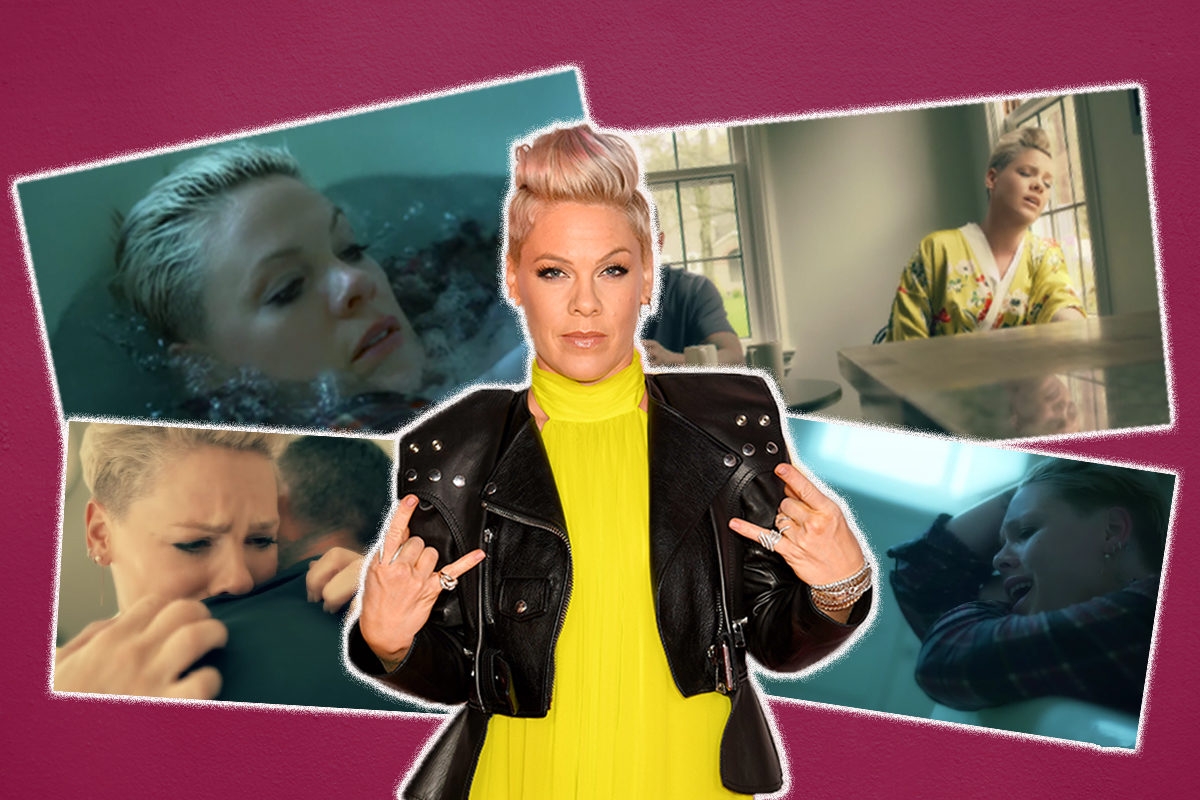 Superstar and Jewish mom Pink just released a brand-new video for “90 Days,” a song off her most recent album, Hurts 2 B Human. Directed by one of her dancers, Remi Bakkar, it’s a brutally raw look at the inner workings of marriage, and its impact on her identity and self-worth.

A duet, Pink’s voice — hauntingly beautiful — meshes perfectly with singer/songwriter Wrable’s equally anguished notes. (Does he sound kind of like Adam Levine to you? Because he does to me!) In my humble opinion, it’s one of her catchiest and most honest ballads to date.

I’ve written for Kveller before about how much I love Pink for how real she is, and this video is yet another example of how she  continues to let her fans into her world, and also subconsciously invites them to embrace their own struggles. The poignant scenes where she’s alone and crying in the bathtub are so relatable, it hurts. Like Pink, I’m 39, and sometimes the pressures we feel at this age can feel insurmountable — having a career while raising a family; doing our best to be a great mom and wife but also be an individual… Sometimes, we feel like failures, and need to sink into a tub (real or metaphorical) to heal.

While “authenticity” is getting a bit of a bum rap these days — is it just another empty buzzword? — it’s ironically exactly what is missing from society today. And that, I think, is why Pink is so refreshing: She is just so damn authentic. In a world of airbrushed celebrities, Insta-perfect families, and curated vacations and meals, Pink isn’t afraid to be vulnerable. She’s unafraid to show the sometimes ugly truths about love, relationships, and self-doubt — things we can all relate to on some level. You hear it loud and clear in her song lyrics, on her social media channels, and in candid interviews.

Just recently, she was burned on Instagram for a photo she posted of her son who had apparently (and unbeknownst to her) taken off his swim diaper. The keyboard warriors were in full force, threatening to call CPS on her and making all kinds of accusations about her parenting. A few days later, she confessed to Ellen Degeneres how painful that public shaming felt — and, yet again, it was relatable. What mother hasn’t been shamed for something their child did?! Now imagine that feeling of shame, times millions of followers. But instead of brushing it off and telling Ellen it doesn’t bother her, in true Pink fashion, she did the exact opposite: she admitted how badly it hurt.

A common theme in Pink’s music is her deep-seated fear that her husband will one day leave her, which — given their openly tumultuous relationship — isn’t necessarily that far-fetched. In fact, at one point, before their daughter was born, they did actually separate, but they never divorced. It’s hard to fathom that a woman who really seems to have it all — she’s an aerialist who can sing before enormous crowds while upside down, who wins Grammys, and writes her own music, who has recently added “vintner” to her resume — is still insecure in her 13-year marriage and in herself — but, hey, she’s human. And, as her album title suggests, it really hurts to be human.

Pink’s husband, Carey Hart, also stars in the video. It’s hard to watch and not feel like you’re peeking into a home movie and getting an intimate glimpse into a reality that’s typically tucked away between four walls. The video moves through a rollercoaster of emotions from scene to scene: there’s a sweet moment when they’re laughing and slow-dancing in the kitchen, then she’s staring out a window while Hart mindlessly scrolls through his phone. They’re in the same room, yet they may as well be strangers.

As for Hart? Well, it takes a brave man to know he’s the subject of a painful song like this. And yet, he still shows up for her time and time again, even sharing the video on his own Instagram. His ability to take her lyrical jabs in stride — recognizing he’s her muse — is pretty awesome.

Truthfully, I wish more people in the public eye would speak candidly about their struggles — whether it’s in marriage, motherhood, faith, family, or health, or maybe all of the above. These are the things that make us human, after all. Take the Obamas, for example — the picture of a perfect couple if there ever was one. One of my favorite passages in Michelle Obama’s memoir, Becoming, was when she discussed going for marriage counseling. The Obamas, too, need to work at it! All relationships require effort, and when our idols when share their struggles, it humanizes them. It helps normalize the anxieties and insecurities the rest of us may be feeling. Sometimes just knowing you’re not alone can be really empowering.

In my early 30s, I learned that one of the best ways to forge human connections is by sharing our demons with one another. I began my writing career by opening up about my journey of recovery from disordered eating. It was uncomfortable and downright painful at times to dig deep and put my truth out there for the ever-judgmental internet to see, but it was so worth it. Here’s why: I was able to use my experiences and my platform to help shed light on a taboo topic, and to encourage countless others to seek the help they needed. Throughout my recovery, I openly spoke about my therapy sessions and my setbacks. Being so honest hurt at the time, but as I learned, many of my readers were struggling with similar issues and needed to hear the ugly truths about recovery. To know my experiences could help others meant so much to me.

Pink talks about this a lot in her interviews: The fans who reach out to her to say how much they can relate to her songs and her struggles, whatever they may be at the moment. It really does make a difference to know you can help someone else. This incredible interview with Carson Daly on the Today show really is really worth watching in full — but you can zoom ahead to the 16-minute mark if you want to see Pink go deep on this subject:

Imagine what the world could look like if we were all a little more honest about our demons. What if instead of “not airing our dirty laundry” we just hung it all out there and even did a little rain dance?

That’s my challenge to you today — to share something you’re struggling with with someone else. You never know who may need to hear it. Because, to quote another Pink hit, if you “ever feel like you’re less than fuckin’ perfect,” that just means you’re 100 % human.