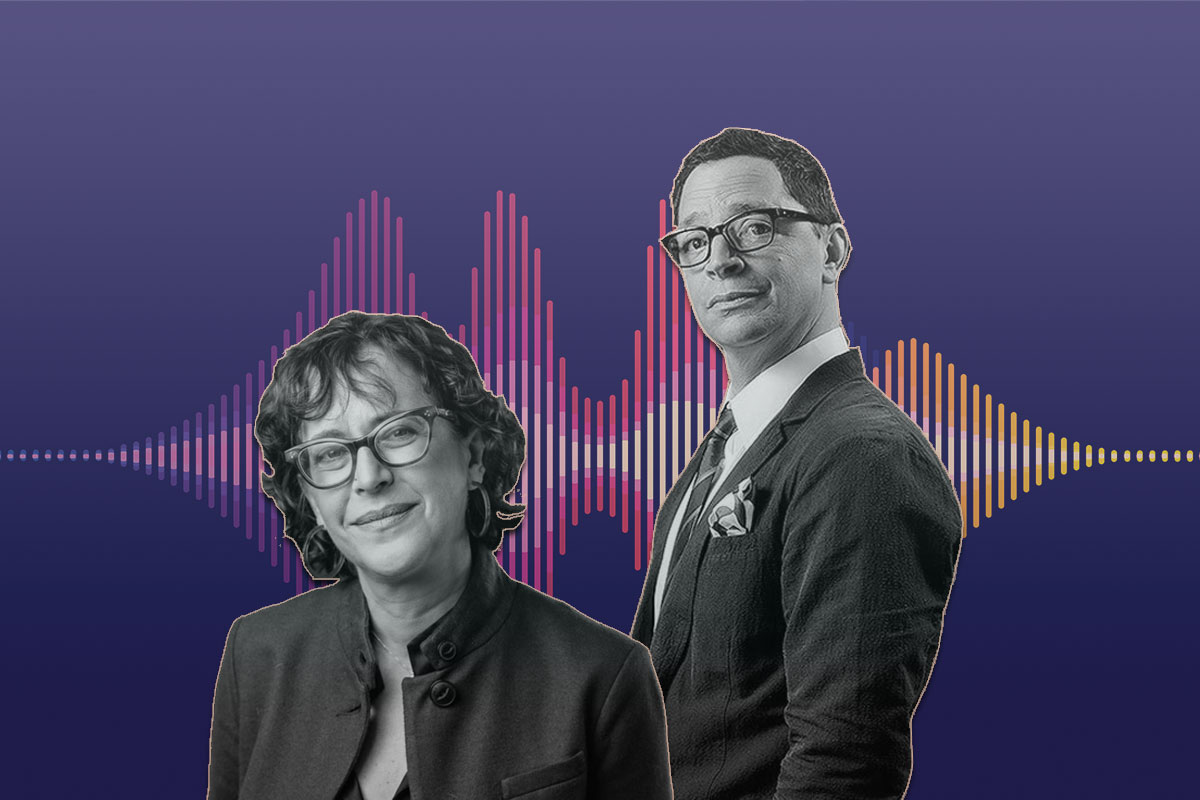 And most of all: Unlike this good Jew, they are not afraid to say the hard parts out loud.

Earlier this month, Stutman and Malina launched Chutzpod!, a weekly podcast in which they look Torah right in its ancient scroll-ey eyeballs and have the chutzpah to ask: What does it all mean today? What does it look like and feel like and sound like to live a Jewish life of meaning and purpose in the 21st century?

Within the first three episodes, Stutman and Malina jump right into the good stuff, with a sense of grace, humility and hilarity that can only be attributed to their shared deep passion for the modern extended Jewish community. How can we engage with the “other” at times when our differences seem truly irreconcilable? How much fear is healthy for Jews? Is it OK to call things goyishe (looking at you, Wonder Bread)? The podcast may not always come to tidy answers, but asking these questions makes for a thoughtful and entertaining discussion that will stick with you throughout the week.

Josh Malina, of course, requires no introduction. From his iconic performance as Will Bailey on “The West Wing,” to his unapologetic (and, somehow, simultaneously hilarious) truth-telling about antisemitism in Hollywood, to his pull-no-punches Twitter feed, Malina brings big chutzpah energy wherever he goes.

And Rabbi Shira Stutman is her own force of nature. For 11 years, she shepherded a nonconventional congregation of Jewish, Jew-ish and Jew-curious young professionals in the most cynical of American cities, Washington D.C. As the founding rabbi of Sixth & I Historic Synagogue, she blew the roof off the place by creating a radically welcoming space for anyone wondering whether *all of this* is all there is. And although she recently stepped down from her role at Sixth & I for what she calls her “year of living dangerously,” Stutman’s rabbinic bona fides glisten on the podcast.

I sat down (virtually, of course) with Rabbi Shira and Josh to learn more about the impetus and goals of the podcast. Full disclosure: I, like half of Washington, D.C., studied under Rabbi Shira while she was leading Sixth & I.

The following has been lightly edited for length and clarity, mostly because your author, apparently, only speaks in run-on sentences.

Tell me, how did you two meet, and how did the podcast happen?

JM: I guess we had a very inside Jewish baseball meet-cute, because we met on a trip to the Palestinian territories sponsored by an organization called Encounter. It’s a fantastic organization whose aim is to bring “Jewish Influencers” together, of which I acknowledge that the rabbi is one. I think my credentials are a little bit shakier, but they invited me, so I said absolutely.

We traveled places I’ve never been to, I heard speakers and met people I’d never met before, I stayed overnight at the house of a Palestinian family in Bethlehem. I’d been to Israel several times previously, but had not been exposed to a different kind of narrative. It’s not like I didn’t know anything about the situation, but there’s a difference between reading books and reading newspaper articles, and being on the ground and meeting people.

It was an amazing experience all together, and I met the wonderful Rabbi Stutman.  There was a lot of being on a bus, getting to know each other, and laughing, talking about important stuff, tears, anger and then decompressing, so we just got to be friends.

Rabbi Shira really came up with the podcast idea; I’m just the lucky recipient of an email months ago.

SS: I was leaving Sixth and I, and I wanted this to be my year of living dangerously. So [Executive Producer Tim Shovers] came and pitched a podcast, and I said, “Eh, I don’t know.” But then I thought — oh, what if I invited Joshua Malina?

Now this part of the story I’ve been telling a certain way, I don’t know if Joshua agrees 100%.

SS: Anyways, I emailed him, and I was like, Josh, I think the world of you, you’re wicked smart. Josh wrote back and said he can’t; he’s working on all these projects. In my memory, I wrote back to him and I said, “I totally get it, you’re the best, our paths will cross again… as much as I would have loved to discuss Ben & Jerry’s with you… you do you.” And he wrote back like a minute later, “I’m in! You had me at Ben & Jerry’s!”

When the podcast is playing, who do you hope is listening?

SS: You know how when you’re pregnant, everyone asks what you’re having all the time? It’s like that; this is the question we get all the time. My answer is always the same: We hope that we’re getting people who are trying to figure out how to live a life of meaning. I don’t care if you’re Jewish. I happen to believe Judaism is a meaning-making technology, and it’s mine, but I’m sure there are others. Anyone who is interested in living a life of meaning – those are the people we want in our chavurah [fellowship].

What do you imagine, in the best of scenarios, happens in your listeners’ lives after listening to Chutzpod!?

JM: It’s easy for me, because I feel like I’m the listeners’ ears into the podcast. I hope that people who are listening get what I know I’m going to get: I’m going to learn from Rabbi Stutman, I’m going to have a provocative and interesting discussion. So if people walk away thinking about any of the issues or life events or things that we discuss on the podcast, that’s a huge win. And if they talk to someone else about it, because they heard us talking about it, even better. I know how these little strands can weave into a web of a community. My dream is that we’ll start recognizing the people that are engaging and the whole thing will turn into a big discussion.

I love the way you two seem very willing to grapple with the hard things, and not just get away with the easy answers. Is that an intentional part of how you’re approaching the podcast?

SS: I don’t know if you follow Josh on Twitter, but he has a reputation for saying what’s on his mind. He doesn’t pull any punches. And I think that, as far as the rabbinate goes, I have that reputation as well. I think that it is intentional to try to say the quiet part out loud.

JM: It occurs to me that the name of the podcast – over which we spent a fair amount of time, going back and forth – all of us, a little bit, thought: Are we just doing a Jewish joke? Chutzpod! It’s kind of funny. But it’s come to inform what we’re doing, and we remind each other at times: We’re calling ourselves “Chutzpod!” If there’s something we’re thinking about not discussing, we’re not living up to our name. The name now inspires the whole endeavor.

Will every episode be tied to the week’s Torah portion?

SS: I think we’re going to try to tap into the week’s Torah portion, but like, we also did Tu Bishvat.

Oh, I just assumed that Tu Bishvat was the parsha.

JM: You know, it occurred to me afterward that that might not be obvious.

SS: This is why we need feedback. Oh my God.

When the hostage situation in Colleyville resolved, there was almost immediately a short Chutzpod! episode available to help us work through it.  Does the dormant-slash-not-dormant-at-all undercurrent of antisemitism in America inform why you wanted to start the podcast?

SS: [We] argue that Judaism has to be about more than fighting antisemitism, and that’s what we want Chutzpod! to be — but I do think both Josh and I grew up in families where antisemitism and the Holocaust are part of our DNA. I actually hope that some of Chutzpod! will help us process through that.

What is something that you think needs to change about modern Judaism, either by being amplified or left behind?

SS: I guess I would love to get rid of — and this is such a rabbinic answer, so please forgive me —the sinat chinam, the baseless hatred. I feel like we Jews — and I believe it’s because we’re a traumatized people — turn on each other because we can, the way that a child turns against the parent because that’s the person in their frame. I feel like we have not learned our lesson. We don’t have to walk in lock-step, but my gosh, at least consider some sort of choreography. When it comes, especially, to Israel, we’re getting further and further away from each other rather than closer and closer together.

JM: My hope on that score is for genetically engineered meat — that they’ll make pork in a lab and the rabbis will say, OK, that’s not really pork. I hope that’s coming.

I think they make that. I think we’re there.

JM:  Well I don’t know if we’re there, halachically. The technology is happening, we just need some Orthodox rabbi to say, “You can eat that! And you can eat it with cheese!”

Rabbi Shira, take that up the rabbinical chain for us?

What else should we know about Chutzpod!?

JM: If you are Jewish and listening to the podcast, and you have a boyfriend or a girlfriend or a spouse or a family member or a friend or somebody who has the slightest interest in Judaism, or maybe not even in Judaism, but in questions of spirituality, faith — we want to encourage people like that to listen. We want it to be provocative and interesting for people who think about these issues through a Jewish lens already, and for people who never have. That’s part of the rabbi’s magic, that she can reach everybody.

SS: You have non-Jewish family members. Your family, against their will, has been brought into the extended Jewish family. Those are the people we want to make sure to have in our conversation. I don’t even know what it means anymore to be “part of” the Jewish people to a certain extent. And that’s why it is so important, when we have moments like we did earlier — when you said “I didn’t know Tu Bishvat wasn’t the Torah portion” — Josh and I continuously hope for feedback, it is very helpful to us.

The second thing I just want to say: What a joy it is to work with Josh. It’s super meaningful to me.

JM: I appreciate that. One of my favorite pieces of feedback is when people say, “I like their chemistry.” That makes me happy.

When do new episodes drop, and where should folks listen?

SS: Friday mornings, they should be in your inbox. Right in time for Shabbos. And people can listen… what do you say Josh?

JM:  Listen wherever fine podcasts are given away for free. You can also go to our website, which is chutzpod.com.

Rabbi Shira, is it work to play a podcast on Shabbat?

SS: No! Not if it’s Chutzpod! I give you halachic permission.