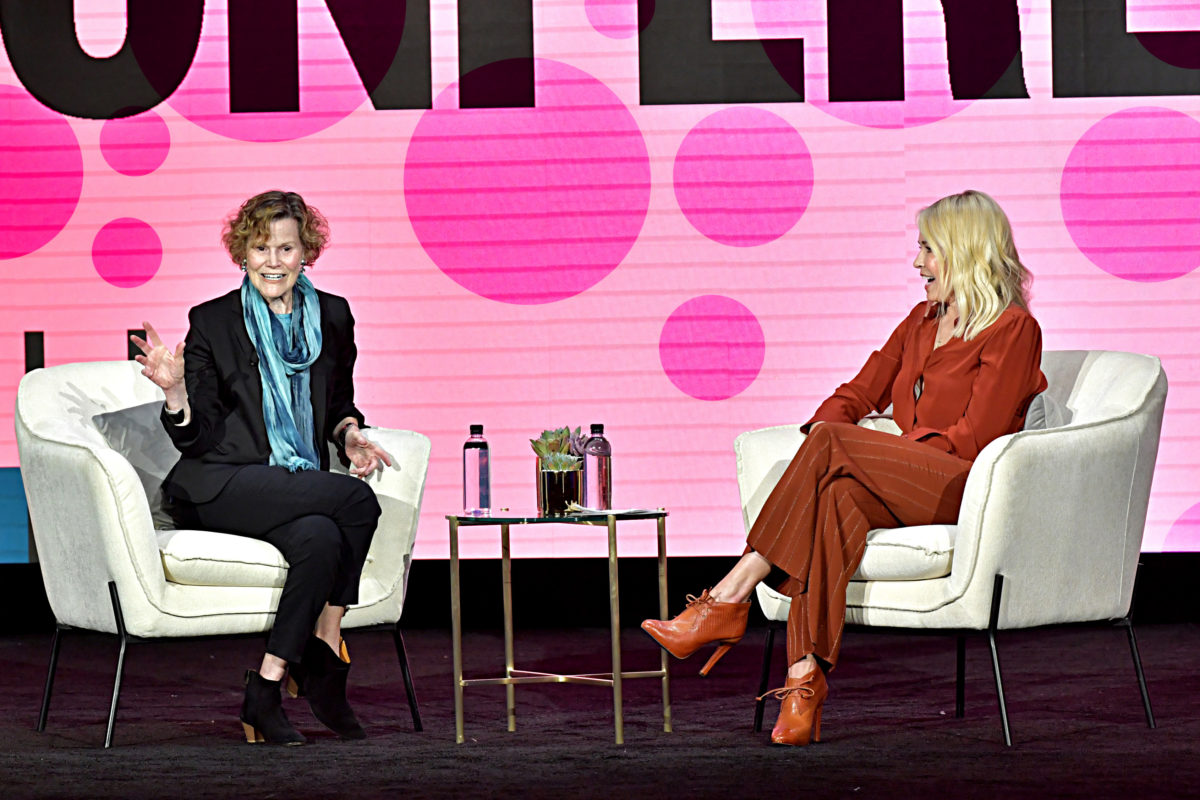 For so many of us, Judy Blume’s books were more than just wonderful stories to curl up with at the end of the day. They were confidants, friends, secret-keepers. They were there to walk us through things we couldn’t necessarily talk about with our parents, like abortion and menstruation, grief and sex, and yes, religion.

That last one was especially important for Chelsea Handler.

At a talk at the 2020 MAKERS conference on Monday, the 44-year-old comedian told Blume that Are You There God, It’s Me, Margaret? really resonated with her when she discovered her family’s religious identity was more complex than she thought.

“I related to that kind of conflict of religion,” Handler told Blume, referring to the protagonist’s struggle with God growing up in an interfaith family. “At that time, I just found out my mom was Mormon, on top of thinking she was Jewish, and your books were such a reprieve for me and such a joy.”

“I grew up as a Jew and Mormon, so we had to choose and I chose Jewish because Mormonism is so ridiculous,” Handler admitted.

Handler’s father, Seymour Handler, is Jewish; her mother, Rita, a homemaker and immigrant from Germany, who died in 2006, was Mormon. Handler chose to follow her father’s religion and was even bat mitzvahed at a Reform synagogue.

Another book that marked Handler was Forever, known for its candid portrayal of teenage sexuality. “I remember being with my best friend, Judy Saperstein, and we would run into the woods to read Forever,” she said.

There were a lot of other great moments during the conversation between these two iconic Jewish women. Blume, 82, talked about how her Jewish father was her biggest cheerleader: “My father, he was the parent that I identified with most, he was like, ‘Go for it, shoot for the moon.'”

She added: “Unfortunately, he died when I was 21 and he was 54, but he was my great promoter.”

Blume also talked about how writing gave her purpose after she became a mom in her 20s. “I was just losing it until I found my way with creative work,” she said. “It could have been anything  but I was home and I had stories inside my head.”

She added: “I was shy, I was fearful. But when it came to writing somehow I became fearless and that changed my life.”

While Blume said her kids grew up reading her books (she says her daughter would excitedly grab the pages out of her typewriter when she came home from school), she told Handler that she wishes they had known more about what life was like for her as a working mother.

“It was just the way it was, mom was home writing books,” Blume said. “I don’t think they ever thought of me as a ‘working parent.’ If I were doing it again, I think I would make sure that they knew the struggle. I was the only woman on the cul-de-sac of this suburb of New Jersey who was working, so we didn’t even think of it that way.”

Blume said that according to her first husband — John Blume, whom she married in 1959 while she was still in college  — her writing was just a quaint hobby. “My then-husband thought, ‘Well, isn’t this nice, give Judy a paper and a pencil and she’s happy,'” she said, adding,  “I’m not married to him anymore.”

While Blume is currently retired from writing books (though she runs a book store in Key West!) she is excited about the next chapter in the life of her books: They are about to be made into movies, starting with Are You There God? It’s Me, Margaret!

“Well Margaret is going to be a movie, and I don’t know. Is it going to work, is it going to please you? I have no idea,” she admitted. “But it’s exciting, and I think after 50 years I was ready to let go.”

Yes! We are definitely very excited to see Blume’s books on the silver screen, and we’re always so thrilled to find out how much her books mean to our favorite celebrities, including Handler. Here’s to more Jewish women taking up space in the world!