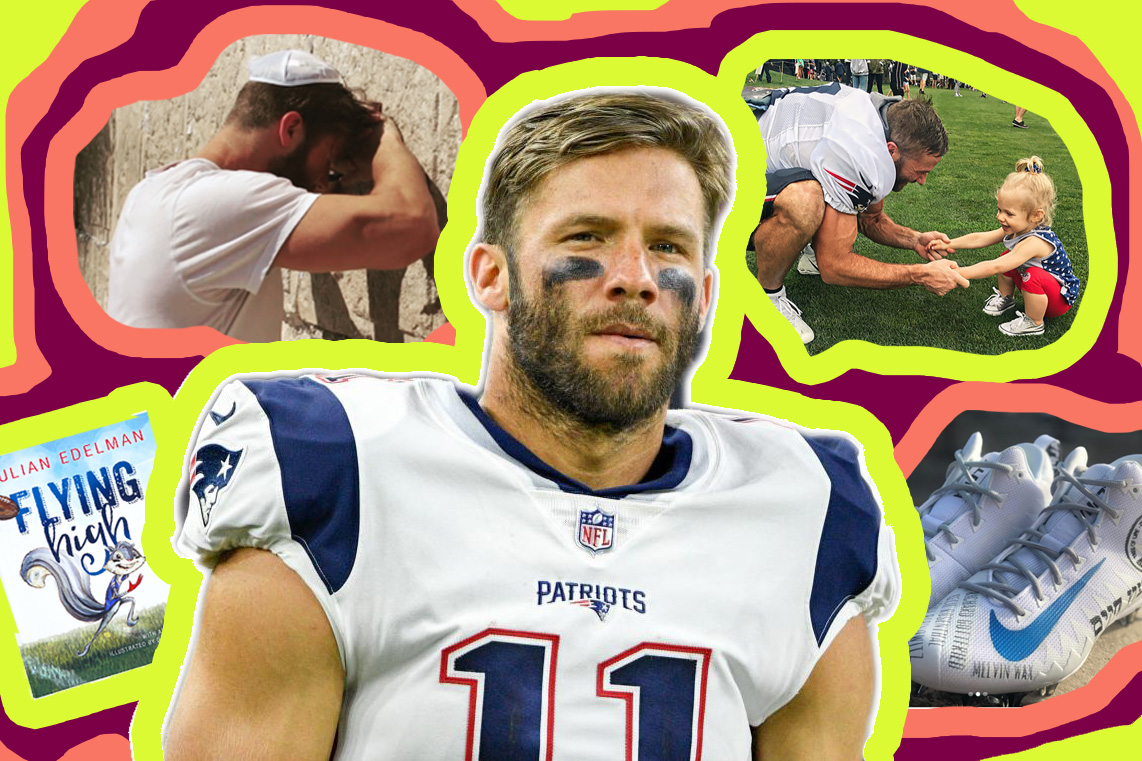 OK, OK. I really don’t know much about football. (And I *know* I’m not the only one, right?) But I know that Super Bowl parties usually have really good snacks, and the televised event is full of very expensive, sometimes moving and sometimes hilarious commercials. And yes, I know that there are some pretty good reasons to feel icky about supporting the NFL.

But I also know that one of the few Jewish players in the entire NFL, the New England Patriots’ wide receiver Julian Edelman, was the essential ingredient in his team’s winning of the Super Bowl last night. (The Patriots now tie with the Pittsburgh Steelers for the most-ever Super Bowl championships.) In fact, Edelman was named the game’s first-ever Jewish MVP (most valuable player).

And I also know this: He seems like a pretty cool guy.

As our friends at JTA report, Edelman didn’t always embrace his Jewish identity. The 32-year-old football star, who has a Jewish father and a non-Jewish mother said in 2013: “Well, I’m not completely Jewish, if you know what I mean. I know people want me to be. My father is Jewish. My mother isn’t. I’ve been asked this before. I guess you could say I’m kind of Jewish but not really.”

But in recent years, he’s taken to proudly displaying his Judaism and his love for Israel in many different (and creative!) ways.

Here are just some of the (non-football related) reasons why we think the Jewish MVP is such a mensch:

Edelman has a daughter, Lily, with his ex, Swedish model Ella Rose, and the pictures he posts of the two of them together will melt your heart.

My light at the end of the tunnel. #Baeatwerkday

He wrote a kids’ book with a Jewish reference

Edelman has published two children’s books, Flying High and Flying High 2, semi-autobiographical tales about a squirrel named Jules with a passion for football who overcomes adveristy. The dedication page of Flying High includes a famous quote from Theodor Herzl, the father of modern-day Zionism, “If you will it, it is no dream.”

He posts epic social media messages for the Jewish holidays

We really love the way Edelman celebrates the Jewish holidays on social media! In a moving Rosh Hashanah message this year, Edelman wrote how grateful he is for his daughter and his family, and added the Hebrew words for “happy new year.” For Passover 2015, Edelman went for funny instead of heartfelt and posted a hilarious meme to Twitter, which shows him catching a matzah.

It’s a very special time of year for both Pats nation and Jewish people all over the world with both Rosh Hashana and Yom Kippur. I’m usually in such an active mode around this time but this year I’m being more reflective and grateful. I’m so blessed to have a loving family, an incredible daughter and amazing support from the best fans in the world. Remember to let the people you love know that you love them and always be grateful for what you have. שנה טובה #ShabbatShalom 🍎🍯🇮🇱🐿

He had an amazing trip to Israel

You can see highlights of Edelman’s first visit to Israel in 2015 with representatives of the Combined Jewish Philanthropies of Greater Boston and a group of Boston-area young adults in the beautifully produced video below.

It includes him in riding a camel, going to the shuk (market) in Tel Aviv, teaching a young Israeli to hold a football, going to the Western Wall and putting on a kippah and tefillin, chomping down on some pita, and going to the Dead Sea.

You can also hear Edelman abundant use of the Arab slang saying “yalla” (for let’s go), which is very popular in Israel.

Edelman wore cleats that honored of the victims of the Tree of Life Synagogue in Pittsburgh. The cleats have the words Tree of Life in Hebrew on them, with the hashtag #StrongerthanHate. In a chillingly moving post, Edelman shared pictures of the cleats on Instagram with the names of all 11 victims.

He told CBS that after the game, the first person he wanted to call was his mom. “I just said, ‘I love you,’ and [that] I appreciate her,” Edelman told CBS This Morning. Of his family, he said: “I wouldn’t be where I’m at without them. Sometimes you just got to say it to let them know.” What a mensch!

He celebrated becoming MVP with this Hebrew word

When asked how he felt about becoming the 2018 Super Bowl MVP, Edelman responded with a hearty “l’chaim,” a popular Jewish phrase that means “to life!” Not only is that adorable, but it’s pretty special given that that he’s the first ever Jewish player to win this title.

Julian Edelman is the first Jewish player to get the #SuperBowl⁠ MVP!

Ok, this one is kind of self-explanatory!