Kirk Douglas, 103, Was an Inspiring Jewish Dad and Husband 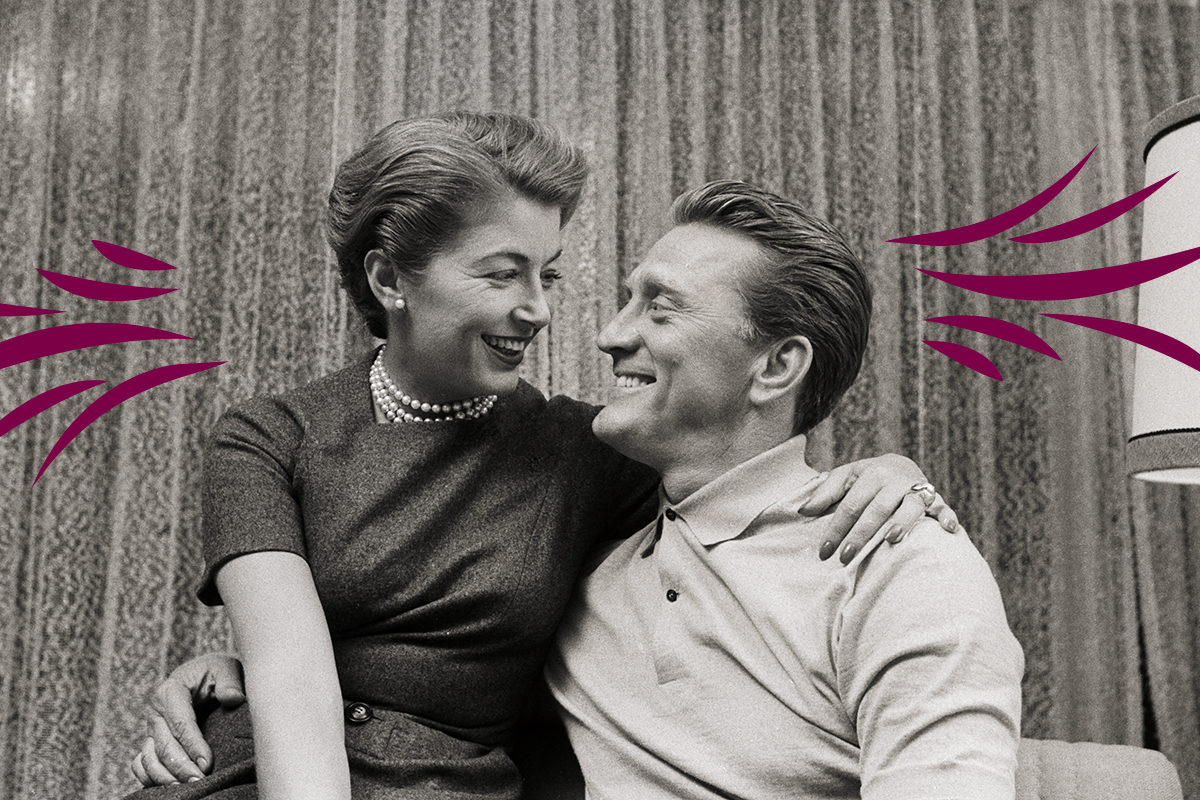 Kirk Douglas, who died Wednesday, Feb. 5 at age 103, was by all accounts a prolific actor — he starred in some 87 movies in his lifetime.

The Spartacus star started out as Issur Danielovitch, a poor Jewish boy from Amsterdam, New York, the son of Eastern European immigrants who spoke Yiddish at home. He was so impoverished that, while in acting school, his classmate, Jewish actress Lauren Bacall, gave him a coat, as he couldn’t afford one.

Of course, fulfilling the American Dream at its finest, Douglas ended up a Hollywood legend. But the legacy Douglas leaves behind is much more than that of a versatile and gifted star: He also built a legacy of love, hard felt by all those in his family, including his sons, his grandchildren, his great-grandchild, and his wife of more than 60 years, Anne Buydens.

His eldest son, actor Michael Douglas, revealed his father’s passing in a moving Instagram tribute, acknowledging his great Hollywood legacy, but, ultimately, that to him and his brothers, he was “simply Dad.” The Genesis Prize recipient ended his post by saying “Dad- I love you so much and I am so proud to be your son.”

"The only thing important to me was that [my sons] be good people who help other people, because all religion should try to make you a better person and a more caring person. Whenever religion does that for you, it's a good religion."

What’s notable is that Douglas doesn’t come from a generation that was known for having affectionate and present father figures. In his youth, he also had a reputation of being, well, as a 60 Minutes segment called it: “a horse’s behind.” He was rumored to be a stubborn man, notoriously hard to work with and be with. His son Michael said he was quick to anger and had little patience. Also, we would be remiss not to mention that, in 2012, he was accused by an anonymous blogger of having raped Natalie Wood when she was 16; this something that Twitter has seized upon, with many people posting tributes to the late actress. This may be another case of an icon leaving behind a complicated legacy that we will continue to wrestle with.

And yet, his commitment to fatherhood was remarkable: As Michael Douglas said in a 2014 joint interview with his father on Entertainment Tonight, “Dad’s history was that his father was not there, and the one thing that he wanted to make sure that he did was to make that effort for his sons.”

In the interview, papa Douglas responds with a heartfelt: “Michael, you’re going to make me cry.” It’s a moment that would make anyone tear up.

And after he survived a near-fatal helicopter accident in 1991 and a stroke in 1996, Douglas reconnected with his Judaism — he had a second bar mitzvah at 83. He also became a lot softer and more affectionate. You can see him getting emotional when presenting his son with an AFI Lifetime Achievement award. “I’m so proud of my son Michael. I don’t really tell him that very often, I’m delighted for Michael,” he says, bringing his son to tears.

Douglas was a loving grandfather to his grandkids. Michael Douglas’ three children, Cameron (who he fathered with his first wife Diandra Luker,) and Dylan, and Carys, posted moving odes to their zayde on his birthday every year. In one video, young Dylan films his grandfather doing an amazingly hilarious dance. Meanwhile, Cameron — who recently published a memoir about his recovery from drug addiction — posted on Instagram on his grandfather’s last birthday,  “You are a gift to the world; a guiding light and source of inspiration to me. I Love you.”

Dylan and Carys’ mother, Catherine Zeta-Jones, also posted a moving tribute to her father-in-law on Instagram: “To my darling Kirk,” the award-winning actress wrote, “I shall love you for the rest of my life. I miss you already. Sleep tight…”

Douglas was also a warrior for justice. He explicitly went against the McCarthyist Hollywood blacklist, hiring Dalton Trumbo to write the Spartacus screenplay giving him an onscreen credit — thus helping to break the blacklist. He was also philanthropic: Throughout his life, he and Buydens donated over $100 million to charity, helping to build playgrounds in Jerusalem and at over 400 Los Angeles public schools.

It was, apparently, Douglas’ mother, Bryna, who inspired his generous spirit. The Jewish mother of seven always found a way to give to those less fortunate, despite their abject poverty: “I didn’t understand. I knew how little we had, and how often my stomach would growl in protest. Ma patiently explained: ‘Even a beggar must give to a person who has less.'”

We extend our deepest condolences to #GenesisPrize2015 Laureate Michael Douglas, Catherine Zeta-Jones and the Douglas family on the death of film legend Kirk Douglas. May his memory be for a blessing. Below: Michael, Dylan (Michael’s son) and Kirk at Dylan’s Bar Mitzvah in 2014. pic.twitter.com/ihlx71brzf

Douglas was a man of many passions, but the love of his life was his second wife. He married producer Anne Buydens in 1954 in Las Vegas. The two met in 1953 when Douglas hired her to do PR for him. At the time, the actor, who had divorced his first wife, Diana (mother of his first two sons, Michael and Joel), and was secretly engaged to another woman, was instantly smitten by the classy, opinionated European beauty — who was herself married. (She had married a Belgian friend for safety reasons during World War II, according to People.)

Still, the actor won her over, and at their wedding ceremony, Buydens, the daughter of a wealthy (non-Jewish) German family, misspoke and agreed to take him as her “awful wedded husband.” Awful or not — the two remained inseparable for the rest of his life. The last of 11 books he published was a book of love letters between the two.

Things weren’t perfect: Douglas was a notorious womanizer (his mother, who had six daughters, often said that girls were dreck — Yiddish for “garbage” — so he didn’t grow up having too high an esteem of the fairer sex). Buydens knew about his affairs, writing,”Kirk never tried to hide his dalliances from me. As a European, I understood it was unrealistic to expect total fidelity in a marriage.” In his 1988 autobiography, The Ragman’s Son, Douglas wrote about said dalliances: “I’m a sonofabitch, plain and simple.”

Still, the two were very much in love. As one of the letters Douglas wrote after the two had a fight makes clear: “Darling, have a feeling you’re not coming back tonight. I hope I’m wrong! It’s been a bad day for me and probably a worse one for you … but I hope that you are here to read this and that I find you when I get back. Suddenly it seems stupid that I am going to dinner without you — Because believe it or not I love you!”

In 2004, Buydens converted to Judaism, just in time for the couple’s 50th wedding anniversary. At the celebration, she told him: “Kirk has been married to two shiksas. It is time he got a nice Jewish girl.”

Douglas’ appreciation for Buydens grew over the years. As he wrote in a poem:

“Romance begins at 80 And I ought to know.

I live with a girl Who will tell you so.”

He dedicated an honorary Oscar he won in 2008 to his wife: “I see my four sons. They are proud of their old man. And I am proud, too. Proud to be a part of Hollywood for 50 years. But this is for my wife, Anne. I love you.”

Despite a complicated legacy, Kirk Douglas changed many lives. Those include the legions of moviegoers he enraptured with his iconic movies like Spartacus, 20,000 Leagues Under the Sea, and Lust for Life. He helped make Hollywood freer and more just by opposing McCarthyism. But, in his most important role of all, he was a beacon of light for his family. When he died, Kirk Douglas was surrounded by his loved ones. In the end, that is all we can ever hope for.