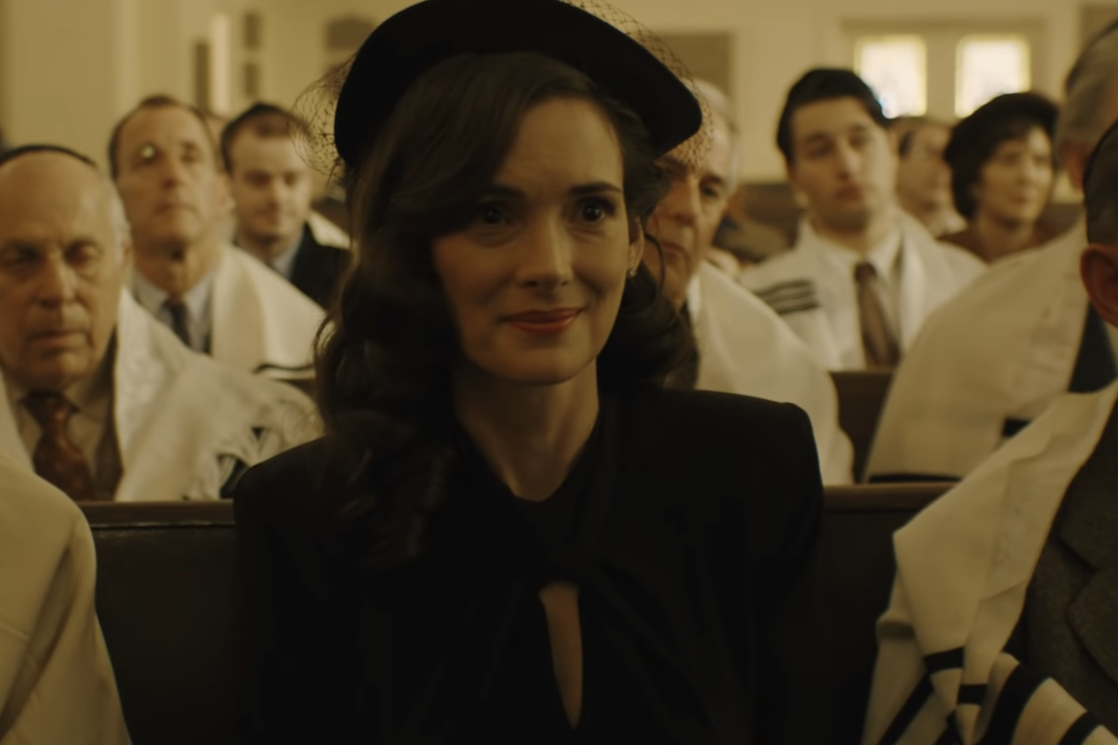 Imagine a U.S.A. that’s ruled by an anti-Semitic, xenophobic, and isolationist leader who enthralls the people. Some might roll their eyes and say this is a product of the imagination of terrified Democrats in 2020, but it’s actually the plot of Philip Roth‘s 2004 novel, The Plot Against America — which is about to become a limited series on HBO.

Judging from the first bone-chilling two-minute teaser of the show, the star-studded six-episode series is going to be just as dark and arresting as its source material.

If you’ve never read The Plot…, the novel is narrated by a fictional version of Roth, in a fictionalized version of 1940s America. In Roth’s version of events, instead of nominating the moderate Wendell Wilkie as the 1940 candidate for President, the Republicans tap aviation hero Charles D. Lindbergh — who is also an isolationist sympathizer of Adolf Hitler — to run against Franklin D. Roosevelt (who, at that point, was on his third presidential run).

In the teaser for the show, we see Lindbergh, played by Ben Cole — who is also about to star in an episode of Amazon’s Hunters, another upcoming dystopic series about Nazis in America — telling voters that their choice is “between Lindbergh and war.” With this simple, captivating slogan, Lindbergh wins the presidency.

David Simon, the much-lauded creator of The Wire and Homicide: Life on the Street, is at the helm of the series. Simon, like Roth, has deep Jewish roots in in New Jersey; his grandparents even owned a grocery store in Jersey City. Simon got the author’s benediction to create the show before his passing in 2018.

Production team now working on Roth's "Plot Against America" unknowingly rolled me up in a scout van to the site of the Jackson Ave. (now MLK), grocery run by my grandparents, where Bernard Simon, my father, grew up. I am, as was once said in that part of Jersey City, fahrklempt. pic.twitter.com/wxpE3NW8jP

But wait! There’s more! Two important roles are played by two of our favorite stars of the silver screen: Jewish actress Winona Ryder plays Evelyn Finkel, Elizabeth’s sister. She falls in love with Newark’s Rabbi Lionel Bengelsdorf, who is played by John Turturro.

The show was filmed around the New Jersey and New York area, including on location at the synagogue where Simon’s father was bar mitzvahed!

First day of filming on HBO’s “Plot Against America” at Beth-El synagogue in Jersey City, where by notable coincidence, my father, Bernard Simon, was a bar mitzvah in 1933. PIctured: Two Hebrews and a Sicilian and of course, the Sicilian plays the learned rabbi. #ThePalermoGaon pic.twitter.com/DO01MGoZwJ

For many of us, the dialogue in the two-minute teaser seem familiar to conversations we may have had during the run-up to the 2016 elections — especially for those of us who’ve gone to holiday dinners with our Jewish families during (and since) that time.

Rabbi Bengelsdorf is a Jewish supporter of Lindbergh. “Admittedly, Mr. Lindbergh made statements grounded in anti-Semitic cliches,” the rabbi says in the teaser. “But he did so out of ignorance.”

“What if Lindbergh does win?” a worried Elizabeth asks her husband. But Herman, channeling your neighborhood Hillary Clinton supporter circa October 2016, insists that Americans will see through him, and therefore will not vote for him.

But as violence against the Jews rises, the Jewish family — and the country — is shaken by Lindbergh’s popularity.

“There’s a lot of hate out there and he knows how to tap into it,” Herman says about Lindbergh.

And yet Sandy, Herman’s eldest son, is captivated by Lindbergh, whom he views as a national hero. And so, apparently, is Evelyn, who winds up marrying Bengeldorf in a beautiful outdoor Jewish ceremony. 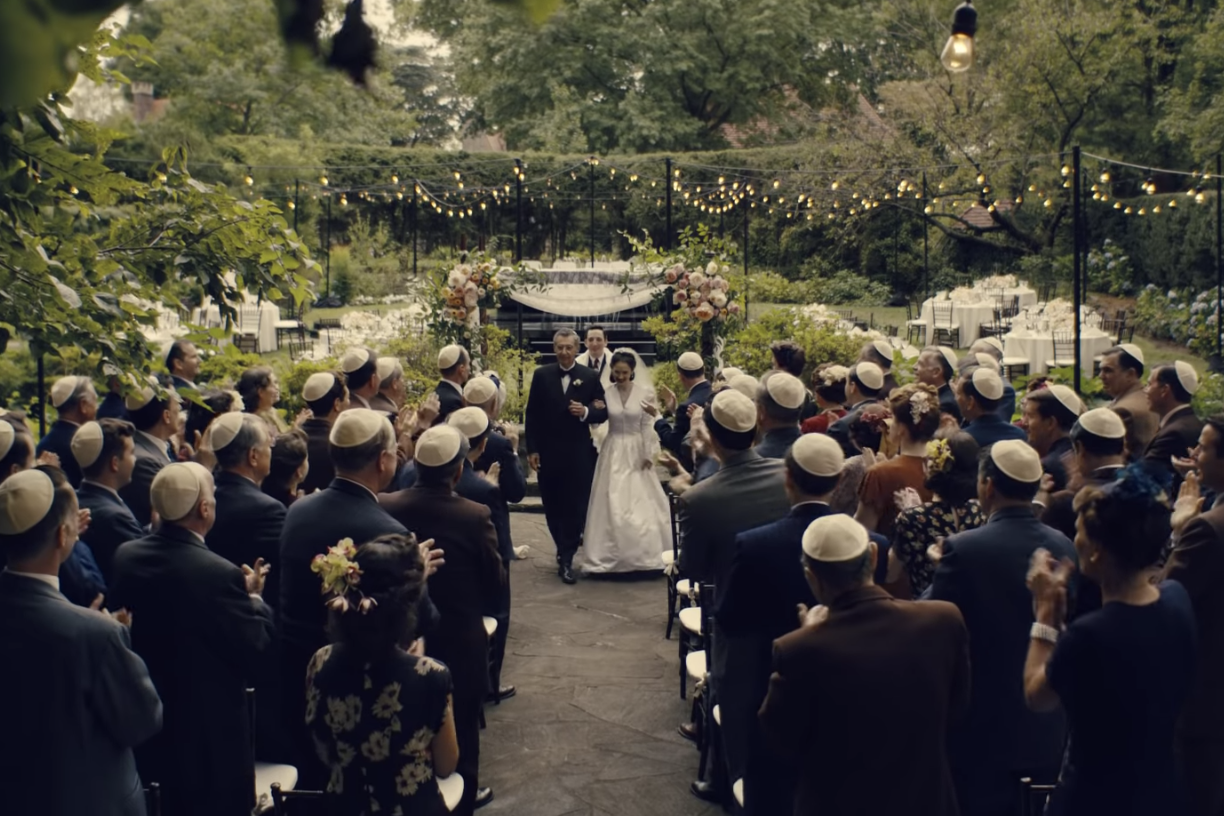 “Maybe it’s too early to leave, but it’s not too early to have a back up plan,” the pragmatic Elizabeth tells her husband at one point in the teaser. (They would be fleeing to Canada, of course. Sound familiar?)

We also see Elizabeth and Herman cleaning what appear to be desecrated Jewish graves, a sight that has become familiar in recent years, as Jewish cemeteries get desecrated across the country and the world. 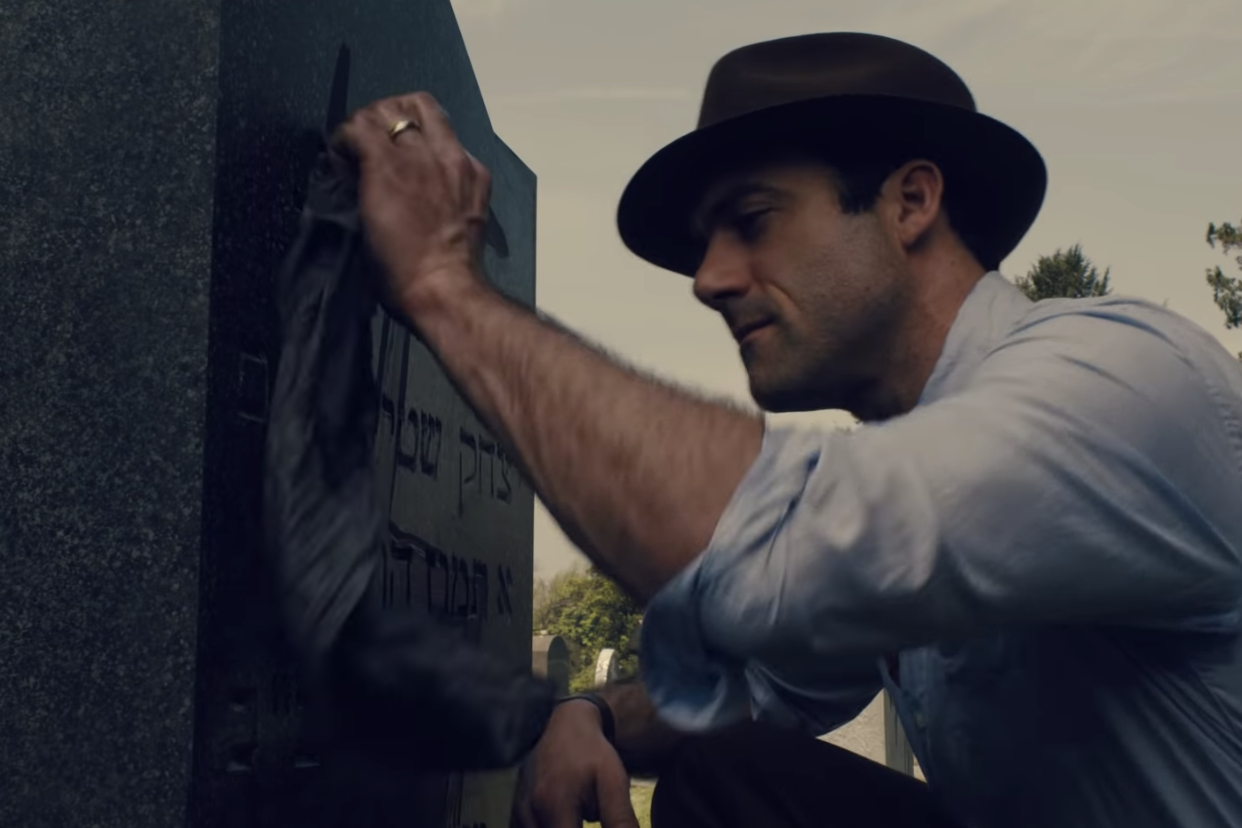 “We only think we’re Americans,” Elizabeth also says touching again on a fear that Jews in America (as in Europe) seem to be perpetually consumed by. (Here at Kveller, we’ve published pieces about these fears many times.)

As it happens, the sentiments of The Plot… are also deeply personal for Kazan, who is not Jewish. She is the granddaughter of Elia Kazan, the Greek-American actor who was once on the Hollywood Blacklist for his alleged involvement with the Communist party — which led him to inform on his colleagues to the House Un-American Activities Committee. Kazan herself said that the show made her think “a lot about how the history of our country affected my family’s history, what it meant for my grandfather as an immigrant to this country to have his Americanness tested and the choice that he made from that.”

So what does this series mean for those of us today who are anxiously awaiting November’s election? After all, one doesn’t need to look hard to see the parallels between Lindbergh and Trump. Trump is known for re-popularizing the “America first!” chant, which the actual Lindbergh was known to espouse. As my colleague at JTA, Uriel Heilman, wrote in 2016: “Lindbergh, like Trump, said he had the backing of a silent majority of Americans who weren’t being given voice by a hostile media. Back in 1941, Lindbergh fingered the Jews as the culprits, saying they were pushing the U.S. toward war through their control of the media. In this year’s campaign, Trump believes the media is against him, too – not because they’re Jews but, he says, because they’re liars.”

Roth, too, was quick to draw parallels between The Plot… and Trump: “Charles Lindbergh, in life as in my novel, may have been a genuine racist and an anti-Semite and a white supremacist sympathetic to Fascism, but he was also … an authentic American hero 13 years before I have him winning the presidency,” he told the New York Times in 2018. “Trump, by comparison, is a massive fraud, the evil sum of his deficiencies, devoid of everything but the hollow ideology of a megalomaniac.”

Simon, too, is known for criticizing Trump. He called the president a “racist moron” after he called Baltimore “a disgusting rat and rodent infested mess.” And with the release of the trailer for The Plot… he wrote on Twitter: “Good that the fundamental institutions of our republic and their checks-and-balances remain intact and we are impervious to the rampant excesses of a political insurgency trading on populism, nativism and fear. Else this narrative would fail as the light diversion that we intend.” No sarcasm detected, right?

And yet, it would be both silly and and simplistic to say that The Plot… is simply a critique of the Trump presidency — it has greater ambitions. “I think it’s fairly apparent that the political paradigm is now — not only in America but internationally — going towards populism, nationalism, and the rise of xenophobia and the fear of the other… The reason to do this is not merely because of the current administration, but because of the forces that are now in play politically,” Simon said at a recent Television Critics Association panel.

So truly, this show has a lot to say — and it’s in good company, too. HBO’s lineup has been full of poignant political commentary in recent years. There’s Years and Years, the British Channel 4 dystopian show that takes on Brexit and isolationism, as well as Damon Lindelof’s brilliant Watchmen, which confronts racism, vigilantism, and dark aspects of U.S. history.

As with The Plot…, these innovative shows urge us to think of what we should do as humans, as a nation, and as Jews, when faced with these terrible forces. And maybe, they also show us how we can triumph over them.

The Plot Against America premiers on HBO on March 31.