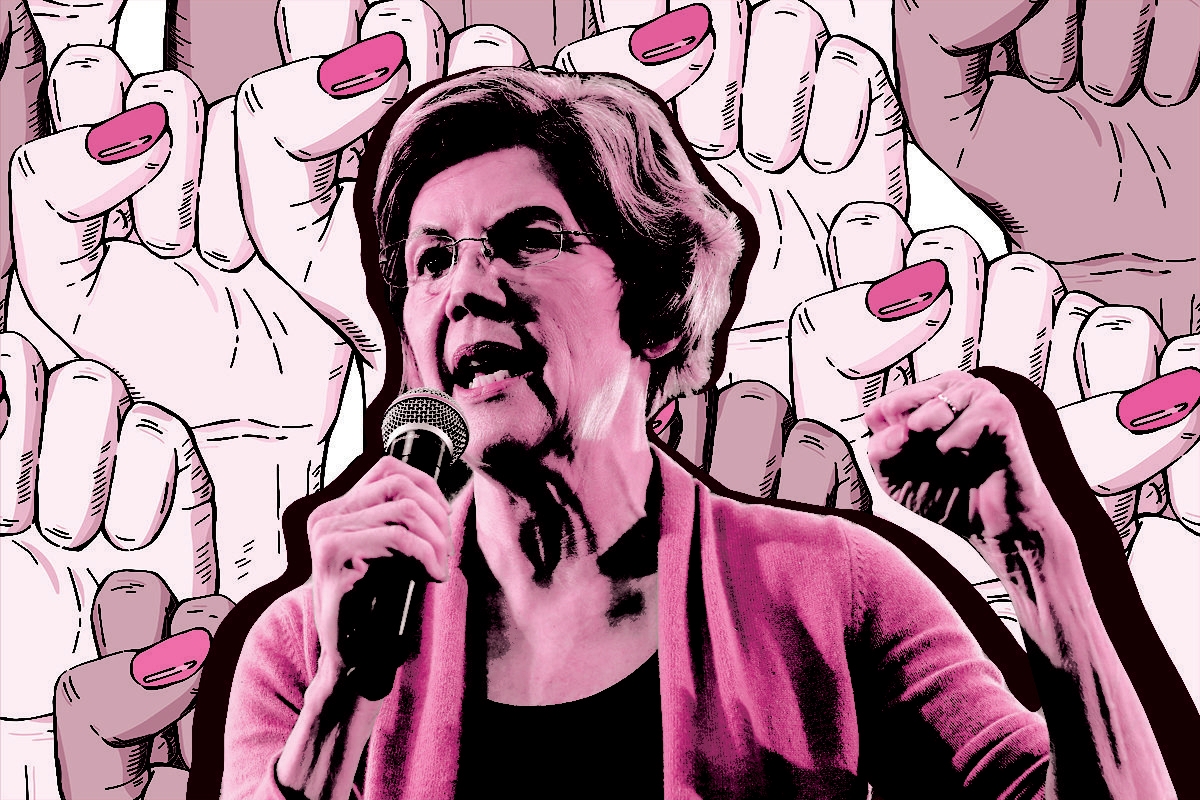 I have the bumper sticker, yard sign, and shirt that says “You Don’t Get What You Don’t Fight For.” I have a note in my phone with what I wanted to say to Elizabeth Warren if I ever got one of the calls she made to donors. My note starts with this: “Thank you for being smart, tenacious, and kind.”

What I didn’t put in that original note, but should have, was a thank you for being a “rebellious woman” in public. Rebellious women are those who are unsatisfied with the world as it is — and her supposed place in it — and does something about it. Rebellious women push back, talk back, speak out, and yes, persist. When you are a rebellious woman — and you can be one no matter your education, work experience, ethnicity, or religion — you are signing up to be told, again and again, that you are wrong, not good enough, and definitely not worth taking seriously.

It was excruciating to watch Warren exceed the standards that the other (and, yes, male) hopefuls in the Democratic presidential candidate race were clearly not expected to meet — and then eventually be met with that amorphous but certain response that she was not enough. Yes, Warren was subject to overt sexism — like the gendered language Biden used in some of his attacks against her. But what sunk Warren’s once-promising campaign in the end is what really stings: There was a palpable shift in the amount of attention she received. Looking back, you can see that coverage about her started to drop in mid-January, before the first caucus but after her public revelation about what she said Bernie Sanders told her regarding the viability of a female candidate.

Like Warren, I am naturally rebellious and so is my 5-year old daughter. I have always struggled with that piece of who I am. I have spent a lot of 2020 trying to figure out how to own my rebelliousness, and how to fully love and support it in my daughter. I don’t want her to have to oscillate, like I do, between speaking out and standing in my truth — and then feeling like I shouldn’t have said, done, or felt it.

Our synagogue recently had a multi-week series looking at the “Rebellious Child.” It was timed after religious school drop-off. I think it had a dual purpose of trying to get people to stay for services — the class was held in the sanctuary — and to give parents a space to reflect about the challenges of raising children and connect with one another.

Several weeks in, we turned to rebellious girls, in particular. We learned about Miriam, who told her father that he had set a bad example for the community by divorcing his wife, because the other men followed suit. She was able to convince him to reverse course and remarry his wife; the rest of the men did the same. We also read about Pharaoh’s daughter, who defied her father’s decree that required the death of all first-born male Jews, by rescuing Moses from the river.

One of the questions that stuck with me from our group’s conversation was whether it makes a difference if you disagree in private or in public. Is a verbal disagreement less troubling than just acting in disobedience?

If rebellion from girls can only be tolerated if it is a verbal disagreement in the privacy of the home — where the parent/authority figure isn’t publicly embarrassed — then that explains a lot about why sexism isn’t getting its due in the public discourse. It explains why so many smart, working women don’t speak up when they are mistreated — or worse — and when they do, it often ends with them being told they are wrong. And there are many ways rebellious women can be wrong: they interpret things wrong, they are wrong to be feeling a certain way, and so on.

Earlier this year, I read a Twitter thread by Nicole Bedera, a sociology PhD candidate at the University of Michigan, that stopped me in my tracks. She offered advice for how to protect children from sexual assault as they go to college, but what intrigued me was how it needed to start from a young age:

“[T]here is one intervention targeting women that — while in early stages — has been able to reduce sexual violence rates. The focus isn’t on rape prevention tips, but on feminist empowerment. (charlenesenn.ca/research/) The part I find most compelling are the lessons on un-learning a traditional feminine gender role….If I think about those lessons in the context of a child’s home, this is the advice I’d offer: Let your daughters blow off their dad sometimes. Let them question his authority. Let them talk back. Let them leave the room in the middle of an argument. Build a relationship between a father and daughter that teaches her that she is equal to men. That she has the right to set her own boundaries and see them respected.”

My daughter pushes back against both of her parents naturally. But when I witness her pushing back to her dad, I often feel caught between multiple impulses: the need to keep peace in the home, the need to make sure relationships don’t feel ruptured, a desire to help her learn to advocate for herself — and a deep fear of what is waiting for her in the world if she does.

The glass ceiling is real and hard. Early in my career, a fellow female attorney told me to deal with overly aggressive, abusive male attorneys by living the saying: “You catch more flies with honey.” She was right. I did it, but I also had to learn to ignore my instincts and how to live with choosing not to fight for what I needed.

I don’t want my daughter to make these same choices. She’ll have to find her own path that works for her, but I want to open up the idea that there are other ways through the world as a rebellious girl in America. A very wise friend recently counseled me that until I make peace with my role as a rebellious woman, but I can’t give her the solid footing that she needs to find her own way.

I have work to do. But I do know a few things: My daughter and I have a few things going for us. Warren was right — you don’t get what you don’t fight for — and we’re ready for that, at least. Second, because my daughter loves the Frozen movies, we have Anna’s wisdom from Frozen 2 echoing in our heads: When you can’t see the path forward, “do the next right thing.”

For me, the “next right thing” is connection — about seeing others fully and allowing yourself to be seen. As I mourn the end of Warren’s campaign, I will start my own campaign to be more aware of the pain and struggles of women around me, and to share my own pain and struggles with them. I will work for myself and my sisters to make more room for being real. I will recognize the enormous power of the subtle yet constant message that we rebellious girls are wrong to want change. Things may not happen as quickly as we would like, and certainly not in this upcoming presidential election, but make no mistake: Change is coming, and we rebellious girls and women are going to be the ones to make it happen.