13 Jewish Facts About 'Frozen,' Just in Time for the Sequel – Kveller
Skip to Content Skip to Footer

13 Jewish Facts About ‘Frozen,’ Just in Time for the Sequel 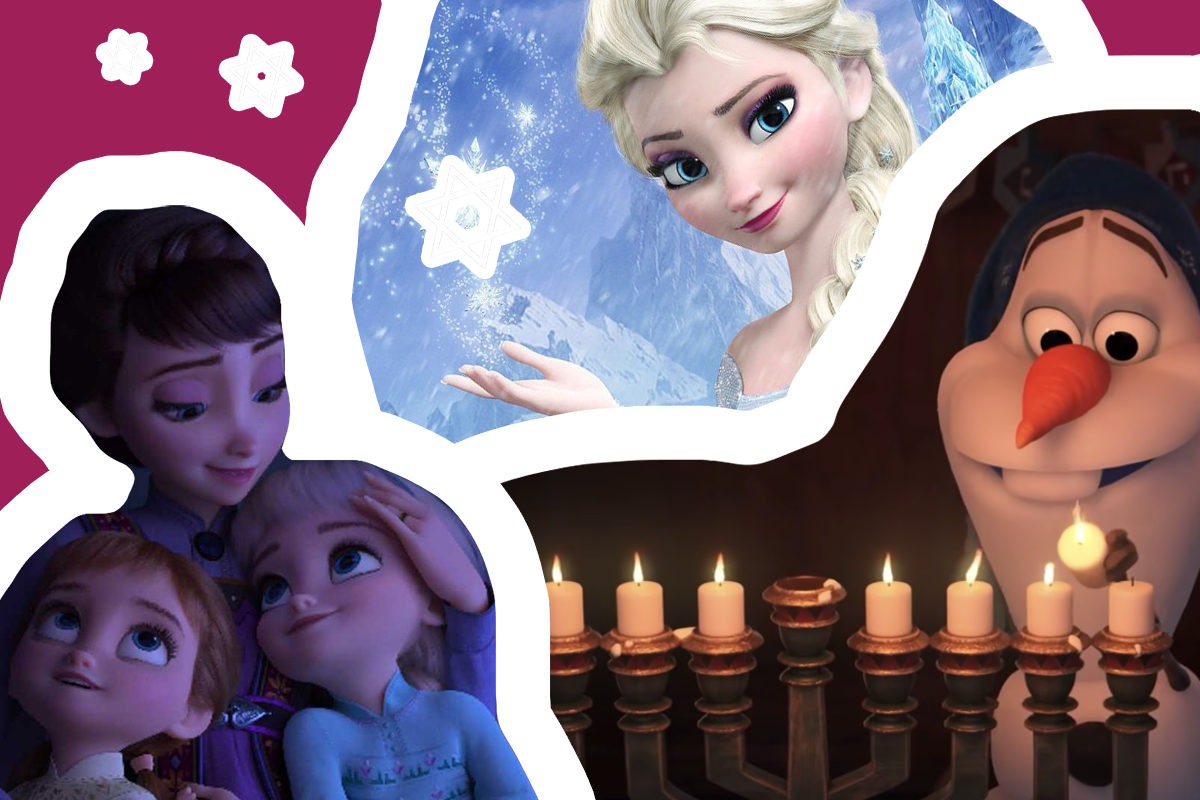 After five long years of anticipation, the moment we’ve been waiting for, with icy bated breath, is finally here! Frozen 2 is coming out this week, to swarms of young kids (and adults, no judgment!) singing “let us go… to the theater!”

Just in case you’ve been living under a rock (hi, welcome!) Frozen is Disney’s instantly iconic 2013 movie about two regal sisters who are doing it for themselves in the icy kingdom of Arendelle.  The film won the hearts of so many across the globe, smashing records and inspiring millions of children across the land to play “Let It Go” endlessly on repeat, driving many a parent absolutely bonkers.

And now, the Frozen 2 sequel is also poised to make it big at the box office.

So why are you reading about this here on Kveller? After all, it’s pretty clear that Anna and Elsa are not Jewish Disney princesses — Sarah Silverman and Jamie-Lynn Sigler have the honor of playing those. But, fear not! There are still a lot fascinating Jewish facts about the movie, its cast, and songs.

So, buckle up and join us on a sleigh ride through these fun Jewish Frozen facts.

1. Idina Menzel, who plays Elsa and gave us the magic that is “Let It Go,” is a member of the tribe. Menzel (who was born Idina Mentzel in New York City) started her singing career at age 15, singing at weddings and bar mitzvahs. Since then, she’s won audiences over as Elphaba in Broadway’s original production of Wicked, and in the hit musical TV show Glee. The Jewish mom, singer, and actor is also about to star in the very Jewish and very non-kid-friendly (sorry!) Uncut Gems, where she plays Adam Sandler’s onscreen wife.

2. Josh Gad, who plays Olaf, our favorite snowman, is Jewish! The dad of two recently played attorney Samuel Friedman in Marshall, a movie about Supreme Court Justice Thurgood Marshall, and said the role helped him honor his Holocaust survivor grandparents. As he told our sister site, JTA , “The stories of my grandparents surviving the camp makes the chance to play this hero who had to deal with anti-Semitism — though obviously in a much less sinister environment — personal. I wish my grandparents were alive to see this very personal part of my journey.”

Aww. But that’s not all! Gad also played Tevye in his high school’s production of Fiddler on the Roof, and the photographic evidence from the performance is amazing.

#fbf – Nobody understands how to be a father of a multiple children going through growing pains or how to reflect the challenges of a lengthy marriage better than a 16 year old in high school. #HighSchoolTevye #fiddlerontheroof

3. Frozen 2 has added a new Jewish actor to the Frozen family — the indomitable social justice fighter Evan Rachel Wood. The mom of one is playing Elsa and Anna’s mom, Queen Iduna. That’s right, she’s not just a Disney princess, she’s a Disney queen! Wood was raised by “a Jewish Southern mom” and a Christian dad, and grew up celebrating both faiths.

4. During the 2014 Gaza War, these Israelis used a parody of “Do You Want to Build a Snowman” called “Do You Think That Was a Siren?” While we’re sad this parody had to be made, we love that Frozen was able to give Israelis some joy and respite during  a very fraught time.

5. In Olaf’s Frozen Adventure, a Frozen short that played in theaters before Coco (much to the consternation of some viewers), Olaf surveys Norwegian townsfolk about how they celebrate “That Time of Year” (AKA the winter holiday season) with a song. During the musical number, he meets a family that celebrates Hanukkah and greets them with a “Shalom!” He even lights the menorah with a darling little girl (and avoids melting from the candles, of course).

Unfortunately, it has been pointed out that there were no Jews in Norway in 1840, so this would not be historically accurate. Though, to be fair, we can assume there were no talking snowmen, either!

6. An Anna Lego figurine once interrupted a gorgeous seaside Jewish wedding. What’s more, the owner of said Anna minifigure was none other than Kristen Bell’s own daughter, Delta, who dropped the doll while watching the wedding from a hotel balcony. (Bell, in case you didn’t know, is the actual voice of Anna in the Frozen films!)

So how did the perfectly inanimate doll interrupt a wedding? (And no, before you ask, Lego Anna did not run off with the groom.) Well, Dax Shepard, Bell’s husband, was trying to retrieve the Lego Anna from some greenery and was thwacking it so loudly he startled guests. Once he realized he was disturbing the wedding, he stopped and waited to resume his efforts until after the ceremony concluded. Shepard and Bell later apologized to the married couple and congratulated them on their nuptials. Sweet!

Watch what happens when their daughter loses a toy in the midst of a wedding ceremony in California. (Via @kristenanniebell on Instagram)

7. Some viewers have observed that “Do You Want to Build a Snowman” sounds a lot like “Papa Can You Hear Me?” from Yentl. After all, they’re both songs trying to reach out to someone inaccessible in your family (though to be fair, one is just beyond the door, and the other one is, well, dearly departed). They’re both about people asking for approval and validation from said distant relative (though, again, in one they are looking for approval in form of building a snowman; in the other they are looking for approval for pretending to be a man). Still, I think we can all agree that they are both wonderful songs!

8. In the year after Frozen came out, there were at least five Frozen Passover parodies. It makes sense: Turning “Let It Go” into “Let Us Go” — by “us” we mean, of course, the Jewish people  — is just so easy! Alison Bernstein also wrote this parody of “Let It Go” called “Get the Dough,” as in what Moses might have said when rushing the Israelites out of Egypt. It’s pretty brilliant.

9. Jonathan Groff, who plays Kristoff, had a surprising go-to song when he was auditioning for musicals as a kid: “If I Were a Rich Man” from Fiddler on the Roof. He told Terry Gross that playing an old Jewish man in the shtetl just worked for him. Funnily enough, Groff’s breakthrough was playing Rolfe in “The Sound of Music” — a character known for becoming a Nazi shortly after his first appearance on stage. Eek!

10. The Frozen soundtrack in Hebrew is actually pretty excellent and you can watch it all here! And did you know that the title of Frozen was translated in Hebrew as Lishbor et ha’Kerach, which means, literally, “break the ice?”

11. Martha Plimpton, who plays Yelana, the leader of the Northuldra tribe, also has a Jew-ish origin story — she told New York magazine that she got her New York breakthrough “in a musical version of the Haggadah when I was 8 years old. I played a Jew fleeing Egypt. And I’ve been an honorary Jew ever since.”

12. Menzel and Bell were both recently awarded a star on the Hollywood Walk of Fame. There to congratulate Bell was her longtime friend, Jewish actress Jackie Tohn, who honored her with what she called a “half roast, half proclamation of love and sheer awe that one mini can accomplish all that she has.” You may recognize Tohn from the TV series GLOW, where her Jewish character, Melrose, led an unconventional passover seder. During that moving scene, Tohn got to memorialize her own great aunt, Pessel, who perished in the Holocaust.

The tiniest mightiest @kristenanniebell got a star on the freakin Hollywood Walk of Fame. She texted me a couple weeks ago asking if I knew anyone who might wanna say a few words. I responded, “Don’t you fu*%ing dare.” And she said, “F you I dare!” So here we are after 16 years of friendship on Hollywood Blvd doing the damn thing. It ended up being half roast, half proclamation of love and sheer awe that one mini can accomplish all that she has. “And it’s just the tip of the iceberg. But not the iceberg that took down the Titanic – a much kinder, gentler iceberg. Ya know, one that gives a home to penguins and polar bears.”

13. Israelis Leigh Lahav and Oren Mendez created an animated (and not at all kid-friendly) parody of Frozen called “Frozen is the New Black.” It’s dark, and hilarious, and so worth a watch!