A Love Letter to Carob 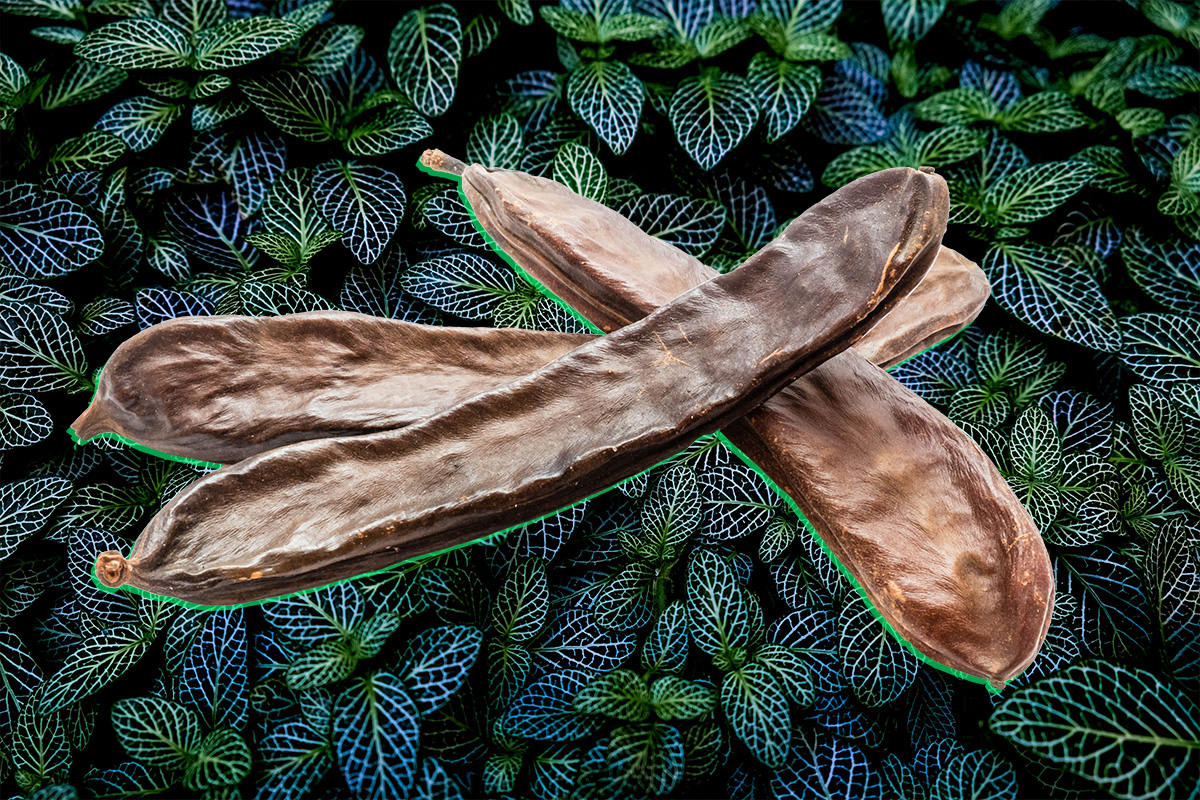 The pods would sometimes appear in our snack drawer: big, dark chocolatey brown, with a slick, almost plasticky texture. They emanated a very faint and yet distinctly sweet scent. In America, some Jews call them by their Yiddish noun — bokser, which comes from the ancient German name for the odd legume. In Israel, where I grew up, we call it haruv, which comes from Arabic. You may know also know them as St. John’s bread, though most people, in English, call it carob.

As a kid — and a teen, and then an adult — who would nervously chew on things, from nails to pens, which would often crack under the pressure of my anxiety, the carob pod was a godsend.

The tough exterior is hard to chew — you have to slowly and methodically gnaw away at it until it’s a thick powder in your mouth. But your jaws’ efforts are rewarded with a delightfully sweet taste filled with spice and subtlety.

Dried fruit of every kind is abundant in Israel. They’re overflowing in canvas bags and cardboard boxes at markets (or, in Hebrew, shuks) across the country — delighting tourists and locals alike with their sweet aroma. Yet, in these stands, bokser is not such a popular treat. Just like in America, it’s often a sort of exotic, once-a-year novelty on Tu Bishvat, the Jewish “New Year of Trees” — where its unusual look and surprising flavor can be a source of entertainment and delight.

Unlike America, carob trees grow abundant across Israel — the Mediterranean climate agrees with this sun-loving crop. Sometimes you can pick their ripe fruit (which takes a year to be ready for ingestion) straight from the trees — an act that always gives you an appreciation of nature and its bounties. Its lovers, young and old, fill their pockets with the brown pods, and chew on it in idle moments.

While bokser may illicit in some fond memories from Hebrew school, it’s undeniable that carob has gotten a bad rap — especially among a certain generation of disgruntled children whose first introduction was unpleasant or disappointing. In the 1970s in America, carob became a popular “healthy” alternative to chocolate, sold in health food stores as powder for “hot chocolate,” or in bars, or as “carob chips” (for shame!). It may, at a quick glance, look like chocolate, but children and adults alike cringed over its waxy texture and earthy taste.

But carob is nothing like chocolate. Comparing them is an offense to each of these delicacies, and I do believe has kept a whole generation from enjoying carob for what it is — an earthy, nutty treat that is certainly not a replacement for the melty, sugary, caffeinated richness that is chocolate.

Carob is also truly healthy — which does explain why it’s such a health food store staple, despite the audaciousness of certain food manufacturers who attempt to sell it as “chocolate.” It does not contain theobromine or caffeine — which are the sometimes undesirable nutrients found in chocolate. And while carob is very sugary, it’s also rich in calcium and fiber, and is a good source of antioxidants.

Personally, however, my favorite health benefit about the carob pod is its potential as a destressor. When I was in grad school, an Israeli friend of my husband’s would chew it on the subway and on the way to classes. It’s a great alternative for smoking, for destroying your nails, or for wrecking writing utensils, which may cause you to accidentally ingest some plastic. And while I do validate the time-honored habit of stress-eating when necessary — especially during a deadly pandemic — the relatively slow disintegration of the carob pod is a nice alternative to frequent trips to your kitchen cabinets.

Let’s face it: We are all incredibly stressed out right now. As parents, as working people, as people trying to survive through a pandemic, we are all wracked with fear and guilt and grief. As a mom who’s trying to work and keep my house from looking like it was hit by a tornado — while simultaneously trying not to relinquish all my parenting duties to a screen  — I’m definitely drowning in anxiety. Will a carob pod solve all that? No, no it won’t. But it will help. A little. And it is a nice novelty and a great conversation starter in the middle of a Zoom meeting.

So I am here to advocate on behalf on bokser/haruv/carob to my fellow (anxious) Jews (and gentiles!). If it’s not available at a health food store near you, you can order some online. Try it today, on Tu Bishvat, and on every other day of the year. Yes, you might hate it, but it might also be your new favorite stress release — and that’s definitely worth a shot (just make sure not to swallow the seeds!).