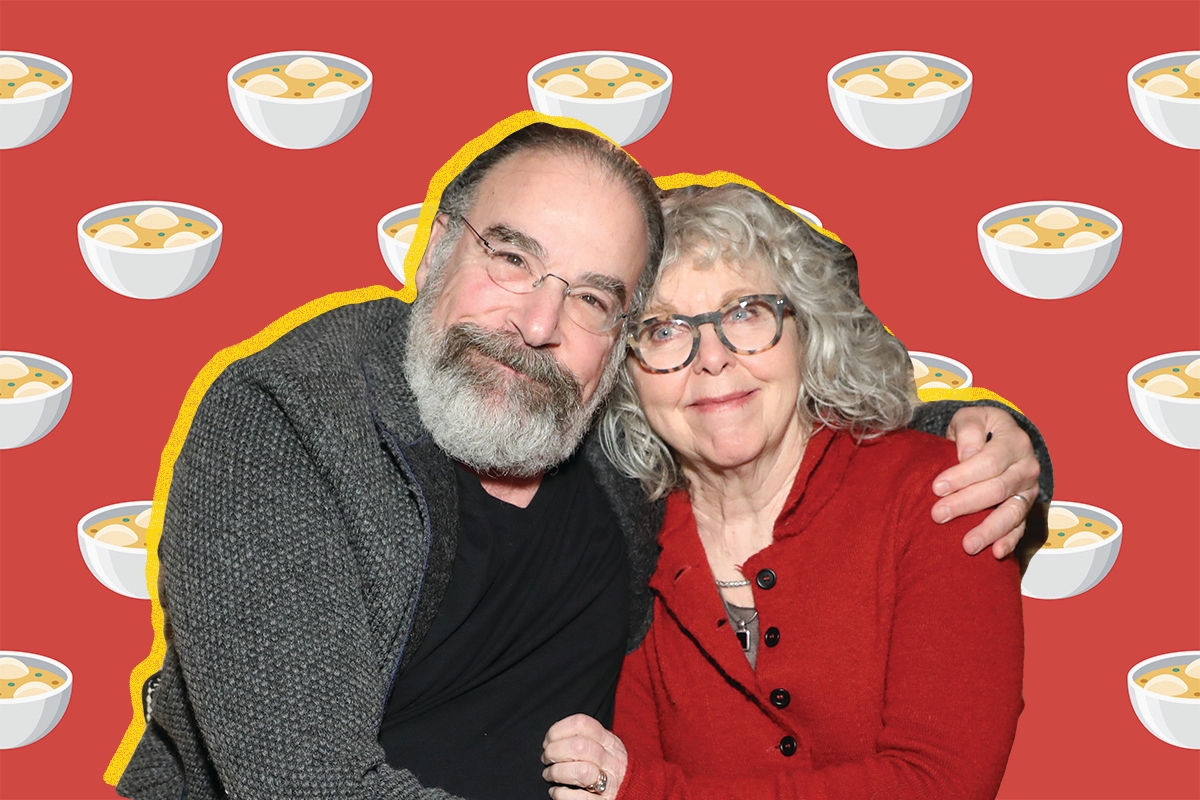 The pandemic has not made relationships easy. To the rescue? Jewish dad Mandy Patinkin. Well, sort of. In a video, Patinkin and his wife Kathryn Grody, who have been married for a very impressive 42 years, are asked by their son Gideon (who is off-camera, except for his feet, but we won’t talk about that),  for their “advice for couples right now.”

“Separate,” he jokes at the beginning of the video (we all know Patinkin is the master, or guru, if you will, of the dad joke). Though he does clarify that he doesn’t mean legally, just spatially: “Have some space between you,” he explains (ok, this is actually good advice! Do your own things, coupled people!).

“One person in the couple,” he then says, emphatically, “has to be able to make chicken soup, in our case it’s her,” Patinkin adds, referring to his wife.

It should be noted that throughout the entire video, Patinkin does seem to be eating a bowl of chicken soup from a beautiful white porcelain mug (we love a soup-in-mug situation.) One can even see the pale piece of long-cooked chicken which are typical of an Ashkenazi chicken soup, though it is unclear whether this soup has the important ingredient that is the dumpling perfection known as matzah balls (Patinkin is a big fan of matzah, and it features heavily in his social media oeuvre.)

Eating chicken soup through the entire video does seem to render Patinkin rather content — he is in perfectly good humor through the whole almost two minutes of the video.

He even stays calm and focused on the question when Grody almost brings up a chicken soup beef (don’t put beef in your chicken soup!) from their past. When she mentions that she’s taught Patinkin how to make said soup, and he mumbles something that about his possible inability to master the craft, and she seems to say something about bones (bones in soup is an issue) he then guides them both to get back to the issue of relationship advice, and away from any chicken soup related bickering.

Crisis averted, thanks to appeasing effects of chicken soup. It may have been a bit of a joke, but it was also sage advice from Mandy Patinkin. Chicken soup saves marriages, that’s a fact.

While many of us are experiencing severe heat at this moment in time, I’d also like to remind you that chicken soup is the perfect food in any weather. While this may be controversial to some, you can, indeed, have it cold, yes. Don’t look at me with such disgust, try it first. Though, experts actually say you should be eating hot foods on hot days. Yes, cooling off with cold foods is a lie —  throw out those popsicles and start paddling that chicken soup — it’s good for your relationships and your body temperature! Also, if you have too much chicken in the soup — it makes for a great chicken salad. And if that’s not enough, chicken soup is also the perfect baby food. It’s just a winner. Honestly, if you could marry chicken soup, there would be no divorces. I’m just saying.

As for the rest of the relationship advice, well, Patinkin and Grody do get distracted with talk about throupling (Grody advises “good organizational skills” while Patinkin acknowledges that while he might have wished to, he “couldn’t throup”), but Grody does offer another piece of helpful advice. The secret to a good relationship, she says, is “knowing that it’s not a personal disaster if you need some space,” echoing Patinkin’s half-joking tip from the beginning of the video and proving that this couple, while they do like to squabble, is perfectly in sync.

As they admit towards the end of the video, whatever issues they may have had within their over four-decade-long marriage it was never ever a lack of love — and we love their love so much (“You have all the other issues,” Gideon then jokes.)

There you have it folks, the secret to a good relationship: Space, and chicken soup. Every Jewish grandmother does concur. If you’re looking for a good recipe, our friends at The Nosher have a lot of Jewish chicken soup recipes, from this Jewban penicillin (yup, a cuban chicken soup!), this overnight Yemenite chicken soup (drool!), Ina Garten’s chicken soup (all hail Ina!) and yes, of course, a classic matzah ball chicken soup situation.

So go forth and make your chicken soups — or better, yet, have your partner cook up one. As Mandy Patinkin rightly states, your relationship needs it!