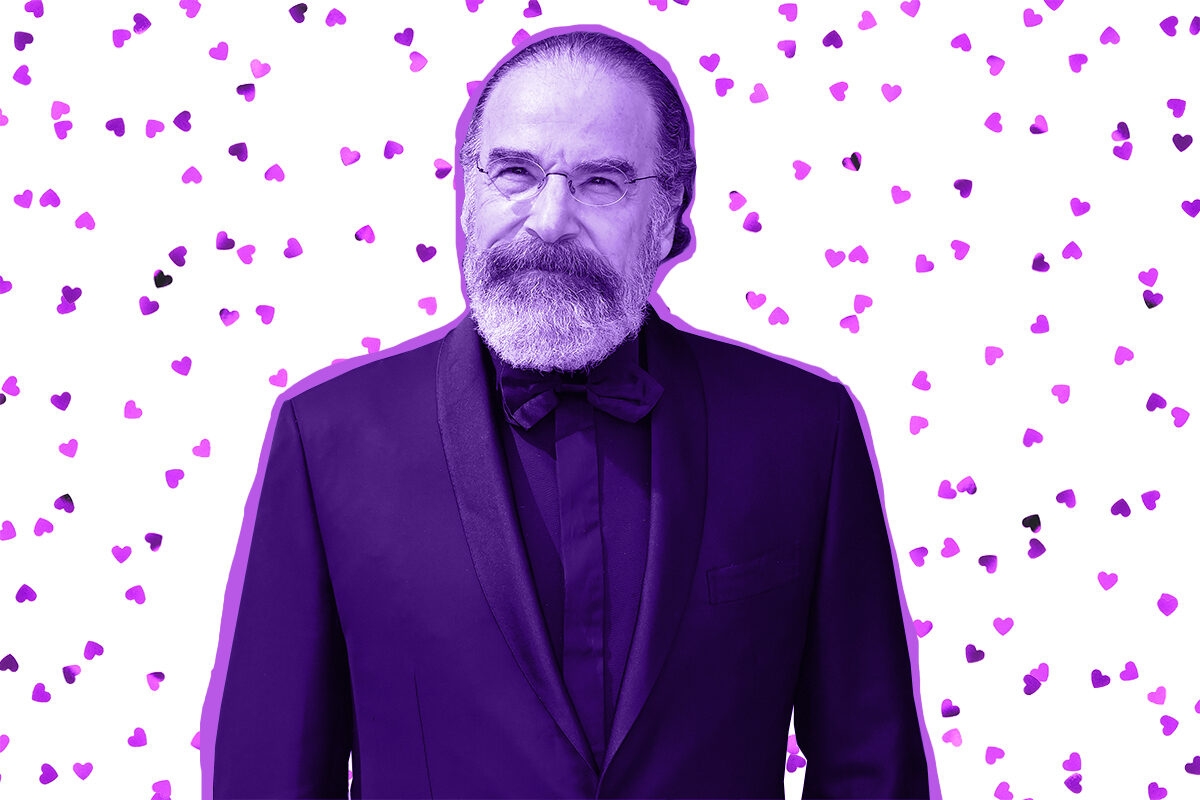 In my five-plus years of working in Jewish media, I’ve written about and delighted in many Jewish stars doing Jewish things. But few Jewish actors give me more joy than Jewish dad Mandy Patinkin — there is something about him that is so infectious and genuine. Everything he does feels profoundly Jewish.

And, look: Jewish dads aren’t perfect. They can be prideful assholes, and Patinkin certainly has admitted to being one. (He once walked off the set of Criminal Minds and did not come back.)

But here’s the rub: He’s fessed up. In a 2013 New York Times article, he said it plainly: “I behaved abominably.” Having enough humility to admit you’ve screwed up? That’s what clinches Patinkin’s Jewish Dad Energy.

Patinkin, 67, was born in the South Side of Chicago and grew up going to a Conservative synagogue. As he told the Jewish Chronicle in 1996: “My real name is Mandel; my Hebrew-Yiddish name is Menachem Mendel after my grandfather, Max, who came originally from Poland.” The actor has had a fruitful and successful career in Broadway, movies, and TV, and he’s brought his intense Jewish Dad Energy to everything he’s done.

Let us review 18 Patinkin moments that prove he is the ultimate purveyor of Jewish dadness:

1. Watch him kvell when an interviewer’s wife goes into labor:

Recently, a tweet about a 2012 interview with Patinkin on Good Day New York went viral on Twitter — and for good reason.

In the clip, the actor is about to launch a funny anecdote about going to Broadway with his son, when one of Good Day‘s hosts, Dave Price, suddenly gets up and rushes off the set. Co-host Rosanna Scotto explains to Patinkin that Price’s wife has gone into labor — and Patinkin just loses it.

His face flushes with unbridled joy and he erupts into laughter. “Oh my God, how thrilling!” Patinkin exhorts, and adds a “Mazel tov!”

“That’s the most exciting thing I’ve ever heard ever!” he tells Scotto, his face brimming with excitement as she tries to get the interview back on track. “Oh, to hell with me!”

“I’m overwhelmed! I’ve never had anything like that happen!” he says at the end of the interview, laughing.

Trust me on this: Watch the clip below. It’s true balm for the soul.

Incredibly, this story doesn’t end here: According to Price, “about a week after Eli came home — a silver kiddush cup… arrived with Eli’s name engraved on it — with a hand-written note attached. The note is locked away — not because it came from a celebrity, but because it was so beautiful & thoughtful.”

2. Patinkin talking about his marriage has me feeling emotions:

Patinkin has been with his wife, actress and writer Kathryn Grody, for 42 years. And it seems like their recipe for a good marriage is very similar to my own: Don’t worry about letting your emotions get all over the place and never bottle anything up.

Recently, on the day after the 42nd anniversary of their first date, their son, Gideon, who is currently social distancing with his parents in Upstate New York, interviewed them about their marriage. Grody has her arm wrapped around Patinkin, a position that seems second nature for both of them, as Patinkin holds the leash for their dog, Becky.

“Our 42nd anniversary yesterday began lovely and then turned into an absolute —  Mandy begins.

And Patinkin concurs: “We love to cry.”

42 years and one day after our first date. True love. pic.twitter.com/asn4Fs6lc0

3. Patinkin and Grody’s song is #RelationshipGoals:

“When I hear him sing [Stephen Sondheim’s] ‘Being Alive,’ that’s our song — ‘somebody hold you too tight, somebody love you too much.’ I’m overwhelmed by how he still moves me,” Grody she told Vulture’s Rachel Handler, the premier Patinkin scholar of our time. “I’ve seen him sing that song a million times. And I lose it every time.”

4. His incredible performance in Yentl:

One of Patinkin’s first movie roles was opposite Barbra Streisand in Yentl, the 1983 Academy Award-winning film based on an Isaac Bashevis Singer play. While Patinkin was overwhelmed to join a project that the Jewish diva had been working on for almost a decade, he ended up helping Streisand with research, and so much more.

But watching him in this role is something else. You can see that Patinkin brings the most to every one of his acting projects. I just gotta fan myself.

5. His Broadway performances are a miracle:

Patinkin’s love of music started at synagogue, which makes sense because his singing is truly divine. In 1996, he told the Jewish Chronicle that he always wanted to be a cantor: “I just want to sing in the synagogue because that’s the first music I heard. That’s what made me like music.”

And you know what? Watching Patinkin singing is an experience many of us would call religious.

Patinkin won a Tony for playing Che Guevara in Evita. It was his Broadway premiere and he was acting opposite the great Patti Lupone. He also won a Tony for his performance as painter George Seurat in Lapine and Sondheim’s Sunday in the Park with George, opposite Bernadette Peters.

In 1998, Mandy Patinkin made one of his longtime dreams come true — he put out an album in Yiddish called “Mamaloshen.” It’s truly amazing to hear Patinkin sing in the language of European Jewry. On the album cover, he put a flag of the United States, claiming that this album is universal, the story of the American immigrant.

One of the songs on this incredible album is a Yiddish version of “Take Me Out to the Ball Game.”  That’s right, Patinkin brings his quirky style of extreme earnestness to everything he does —  he even once sang the hit Shawn Mendes song “Stitches” in the Jewish tongue.

7. The energy he brings to “Over the Rainbow” is transcendent:

One of Patinkin’s favorite songs is “Over the Rainbow,” a song written by the sons of European Jewish immigrants escaping persecution, Yip Harburg and Harold Arlen (with some help from Ira Gershwin). Patinkin has sung it three times while performing on the Letterman show, which is quite a feat. Patinkin’s rendition brings the sadness and the longing of this beautiful song.

8. He made his mom write a cookbook:

Patinkin asked his mom to write a book of the recipes he grew up with — and yes, Grandma Doralee Patinkin’s Jewish Cookbook is a thing that exists, and yes, there’s an adorable picture this mother-son duo on the cover.

This book has all the Ashkenazi Jewish classics, blintzes, chopped liver, as well as more adventurous recipes and cream cheese brownies. As reviewer Dana Jacobi wrote, “The Patinkin family’s cooking, like Mandy’s singing, is unique, bold, and delivered straight from the heart.”

And if that’s not enough (DAYENU!), here’s a video of Mandy and his ma making some potato latkes:

9. Patinkin as Papa Smurf is the leader we need:

“It may seem like Papa Smurf is the wisest Smurf who has ever Smurfed,” Patinkin said about his role as the Smurf patriarch in the 2017 animated feature. “But truly, sometimes, he has no idea what he’s doing.”

That’s right, Patinkin brought his Jewish dad energy to the bluest, tiniest, most adorable dad ever.

10. Don’t forget his duet with Madonna!

Yes, that right, the Kabbalah-loving pop legend once had the privilege to sing with Patinkin. (He must be her lucky star!) They performed a duet called “What Can You Lose” in the 1990 film Dick Tracy, based on the eponymous Chester Gould detective comics. The song was written by Sondheim, which of course means it’s excellent:

In the Showtime hit Homeland, Patinkin plays Saul Berenson, a Jewish CIA leader with excellent facial hair. The show, which is based on the Israeli TV program Prisoners of War, is now in its eighth (and final) season, and Berenson has gone through a lot, but one thing that has remained is his Jewish dad beard, which, just like everything about Patinkin, is excellent.

12. He gives his time and gelt to important causes:

Patinkin and his family are doing so much to help draw attention to the plight of refugees around the world. Along with the International Rescue Committee, he has traveled to Greece and Germany to witness the plight of Syrian refugees. More recently, Patinkin, his wife, and his son, Isaac visited Uganda to draw attention to the suffering of refugees from South Sudan.

He even blew the shofar for Hazon’s Earth Day event to #SoundTheCall. We love it.

13. He celebrates other artists:

When Jewish actor Jake Gyllenhaal reprised Patinkin’s iconic role of George Seurat in Sundays in the Park with George, Patinkin got seriously verklempt. “I sat there with my wife and as the piece began I just began to weep, and I was very concerned that I would be too loud in the audience crying.. and then they brought me backstage to see Jake and he and Annaleigh were waiting there and… we fell into each others’ arms.”

“To see it so tenderly taken care of, you can’t give me a greater gift,” he said about the musical’s revival.

14. His love for model trains:

Patinkin has a passion for model trains, which he got from his own Jewish dad, who died when the actor was 19.

“My dad in 1960, when I was 8 years old, he really bought it for himself, he bought us the first set, of which I have every train, every car from that set, every one of them works to this day,” Patinkin told Stephen Colbert. We’re in awe.

15. Observe him training his dog:

When I say Patinkin gives his all to everything he does, it is not hyperbole. Just look at him training his dog. He is the dog. It is adorable, and slightly unhinged — in the best of ways.

16. He still can’t get over Inigo Montoya:

Of course, we have to mention The Princess Bride. Patinkin says he’s still stunned by how iconic his line has become: “My name is Inigo Montoya, you killed my father, prepare to die.”

“When people ask me to do it, I literally can’t get over that I got to be the guy that they’re talking about,” Patinkin delightfully told Colbert. I can’t handle the cuteness.

The senator from Texas is a big fan of The Princess Bride, and is known for quoting the family-friendly movie, particularly that iconic line. But Patinkin has called out the senator for not understanding the real message of the movie, saying that his character’s most important quote is the one he says toward the end of the movie, after he completed his life’s mission of payback: “You know, I have been in the revenge business for so long, now that it is over I don’t know what to do with my life.”

Patinkin says the movie is all about the inutility and tastelessness of revenge, and that avenging our dead through wars and attacks helps no one, and is not in the spirit of The Prince Bride. Preach, Mandy, preach!

Patinkin says his biggest life achievement is being willing to grow and change — and having his sons, Isaac and Gideon, look on.

“I’m so thrilled, every day of my life, that I didn’t die at 52 like my father died when I was 18, that I get to be 66 and my children have had all those days with me and that I’ve gotten to grow and learn and change,” Patinkin said in a 2020 interview with CBS. “And more than anything, that my sons witnessed that difficulty that their father had, and saw their father change. That’s the greatest gift I think I’ve ever given to my children showing them that I was capable of change.”

And to that I say a tearful “amen” and thank you, Mandy, for reminding us all what being a good parent is all about.