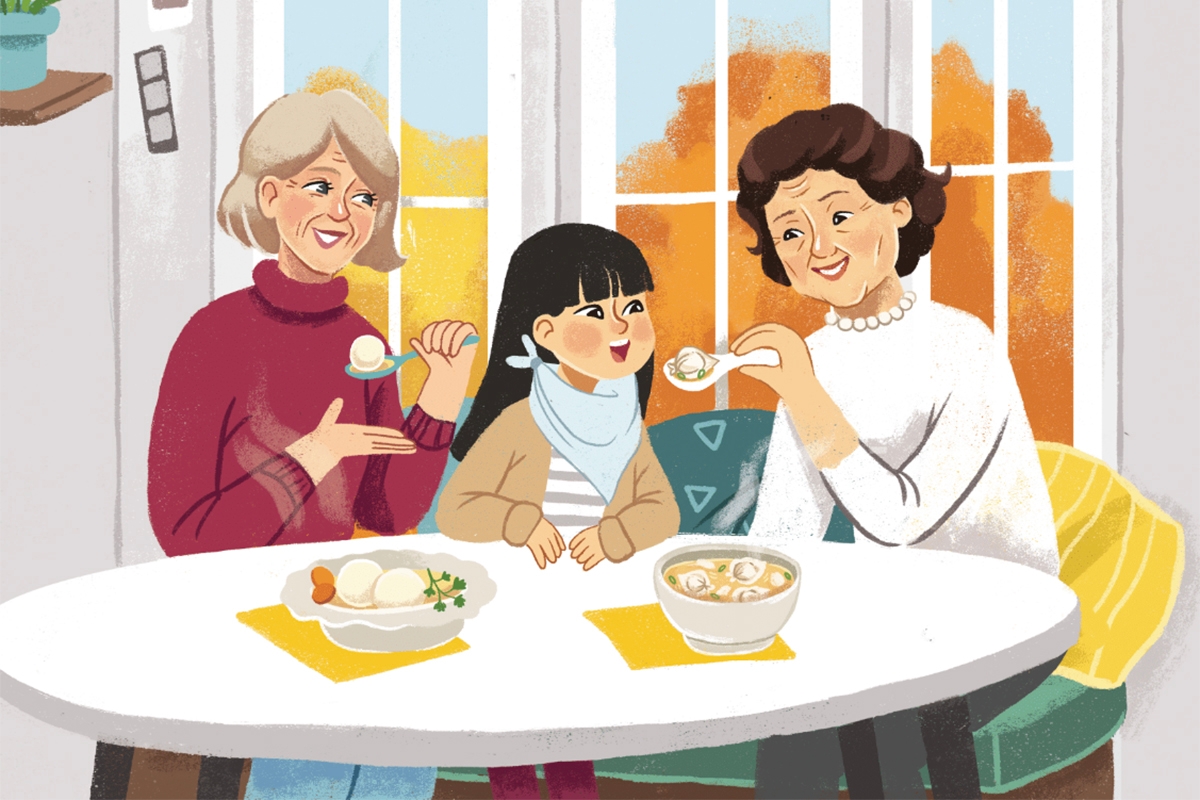 Like many children and grandchildren of immigrants, the heroine of the new children’s book “Matzo Ball-Wonton Thanksgiving,” Amelie, longs for what she calls a “real Thanksgiving food” — turkey, sweet potatoes, cranberry sauce and pumpkin pie.

Instead, her grandmothers, whom she calls “nai nai” and “bubbe,”  offer her “matzah ball-wonton soup” — a delicious dish that mixes her family’s Jewish and Chinese heritage.

“There is no soup on Thanksgiving,” Amelie protests. But as the story of young Amelie unfolds, she goes through a familiar journey (at least familiar to those of us who grow up feeling othered by the traditional food on our families’ dining tables) —  a journey that helps her appreciate how special her family, and the food it serves, really is. Ultimately, she realizes that there’s more to Thanksgiving than turkey and pumpkin pie.

It’s a journey that the co-writer of the book, 16-year-old Amelie Suskind Liu, who previously wrote about her experiences being multiracial in America for the Chicago Tribune, went through herself. Suskind Liu wrote the book with her grandmother, Leslie Lewinter-Suskind — who, yes, is the one that helps cook up that wonton-matzah-ball soup Liu’s family eats on Thanksgiving.

The book, illustrated by Maria Dmitrieva, is a vibrant celebration of multiculturalism and diversity that encourages its readers to use Thanksgiving as an opportunity to celebrate the many cultures and many foods of America.

Kveller spoke to Suskind Liu over email about the process of writing this book with her bubbe, what she hopes families will take from it, and what her favorite Jewish and Chinese food combinations are.

This interview has been lightly condensed and edited for clarity.

How did you decide to work on this book together and what was the process of working together like? What were some of your biggest challenges? Biggest joys?

While stuck in the same house for months during quarantine, we’d spend countless hours talking about identity. Amidst the Black Lives Matter movement and the Stop Asian Hate movement, I, Amelie, became hyper-aware of my Chinese-Jewish identity. I’d spend time with my Bubbe discussing and dissecting my intersectionality, which allowed me to finally realize the beauty of my multiculturalism. Because I wish I’d known the beauty of my identity at a younger age, and with help from my Bubbe (the most fantastic writer I know), I came up with the idea to write a children’s book about multiculturalism.

Working together was one of the best experiences of my life. My Bubbe is an incredible writer and thinker, which means she did not take it easy on me! Throughout the whole process, I was constantly challenged and learned an immense amount. Most of all, the process was the biggest joy, because I got to create something so special with one of my favorite humans in the world. The biggest challenge was translating a complex message into words that could be digested by 6-7-year-olds. I had to understand the book’s message inside and out!

What are some of your favorite things to do together (that aren’t writing adorable children’s books!)?

Our absolute favorite thing to do together is talk. Every day during quarantine, we’d spend hours talking about old memories and future plans, as well as sharing our writing with each other! We also love to travel together, whether it be exploring a place only a few hours away or flying to Africa.

Do you have a next project in mind? Are you hoping to collaborate again?

Yes, that is the case in my family! This book is very much a reflection of what my family is actually like. Growing up, I was always jealous I never had a “grandmother” — but I did always have “Bubbe” and “Nai Nai.” My relationship with both of them has always been just as loving as that of the characters in the story. Sadly, my Nai Nai passed away, but what remains true for my relationship with my Bubbe is that she’s my person.

Judaism is one of the most important things to me. I’ve always felt loved, accepted, and at home in my Jewish community. I love that there’s something so special about being a Jew — there’s an instant, unspoken connection when you meet another Jew.

What is your favorite Jewish food?

Latkes! Ever since I was little, the crispy, golden brown potato pancakes were always my guilty pleasure.

What is your favorite Jewish holiday?

Rosh Hashanah is my favorite. It’s always been a holiday of high spirits; going to services and seeing other Jewish teens was something I always enjoyed.

What are other ways you have of combining your Jewish and Chinese heritage?

I’ve always combined my Jewish and Chinese heritages through holidays. Whether it be eating Chinese food on Rosh Hashanah, latkes on Chinese New Year, or even matzo ball-wonton soup on Thanksgiving, food has always been my way of expressing my intersectionality!

What other Jewish and Chinese food combos would you recommend to our readers?

You can’t go wrong with a plate filled with latkes, pan-fried dumplings, hamantaschen, and egg tarts!

All proceeds from the sale of the book are donated to the National Alliance for Children’s Grief — why was that important to you? Do you think food plays an important role in the grieving process?

The NACG is really important to me. It’s an organization that wants to raise awareness around children’s grief with the intention of building up resources for mourning kids, and I want to support the NACG as much as I can. I myself am a bereaved teen, and growing up while addressing my grief has been an incredibly challenging experience. When I was seven years old, my father died while saving two drowning boys in Lake Michigan. And as my family grieved, my school community brought breakfast for my family every single morning for three months. These meals were expressions of condolences, and recognition of the difficult time my family was going through. It was their way of showing us they cared and wanted to offer comfort, and it was a prime example of how food plays an integral part in the grieving process.

What are you hoping kids and their families will take from this book?

I want multicultural families to read this book to their kids. If this book, which hopes to instill pride in diverse cultures and traditions, is read to children, these kids can finally have the opportunity to see themselves in books and to celebrate the beauty in their multiculturalism. I hope that after reading “Matzo Ball-Wonton Thanksgiving,” these children will grow up knowing that they’re not alone in feeling conflicted in their cultures, but also knowing that they don’t have to fit any idea or mold that people may push on them.