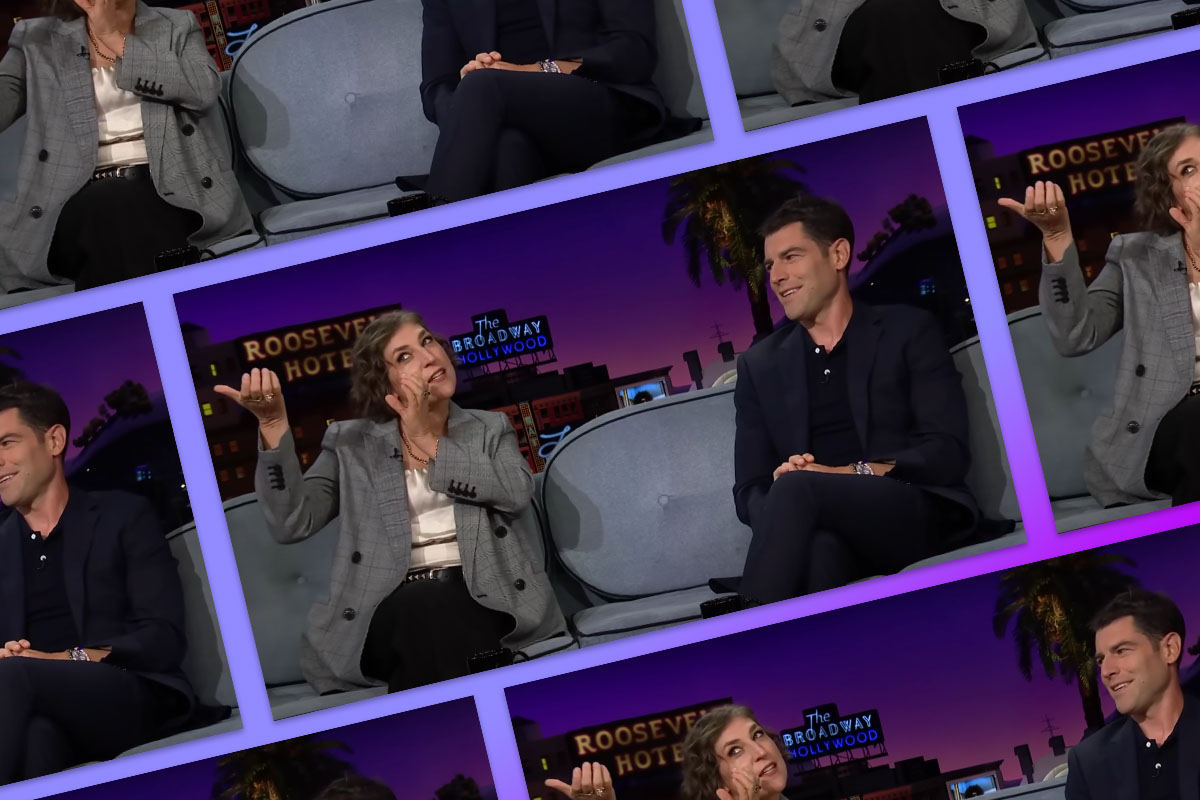 Some moments of Jewish representation just hit so right, and one such moment took place on the “Late Late Show with James Corden” last week. It involved “Jeopardy!” host and “Call Me Kat” star Mayim Bialik, “New Girl” and “The Neighborhood” star Max Greenfield, an imaginary shofar and a very, very confused Corden. And it was truly glorious.

“You can wish it to Max, too!” Bialik responds. After talking about her Rosh Hashanah services, which she decided to do outdoors this year because she didn’t want to be masked indoors for the long service, Bialik shared the special role she holds in her congregation.

“I am a shofar blower — insert joke here. A shofar is a ram’s horn… it’s a ritual instrument,” Bialik explains to Corden.

And that’s when Max excitedly interrupts her in traditional Jewish fashion (it’s called cooperative overlapping and this entire clip is the perfect example of it, as author Jessica Russak-Hoffman asserted on Twitter).

What ensues is Bialik and Greenfield mutually fangirling (and fanboying, I suppose) about the ritual horn. Bialik laments that she didn’t bring hers, and Greenfield says he wishes they could’ve done a demo. They then decide to do an impromptu demo with an imaginary shofar, with Greenfield crying out the names of the different shofar blasts (he gets tekiah, but Bialik has to fill him in on shevarim and truah) and Bialik demonstrating with an imaginary horn.

When they get to “tekiyah gedola,” the big finish, Greenfield gets especially thrilled, explaining to Corden that the last blast has to go on as long as possible, and that the entire congregation goes wild for it. “It’s the most exciting part of the Jewish culture,” he says.

As their demo ends and Corden looks genuinely overwhelmed with the particularities of shofar blowing, Greenfield and Bialik high five each other.

“This will be my dad’s favorite bit that I’ve ever done on a show,” Greenfield tells the audience, and then beseeches the producers to not “cut it out please.”

Despite the very lovely but discombobulating interruption, Corden continues asking Bialik about her shofar, which she tells the host is a yemenite horn gifted to her by her grandmother of blessed memory.

She says she used to have a small shofar but the yemenite is better — “You get a big sound out of the big shofar,” she says, and Greenfield hoots, while Corden still can’t get his bearing.

“It’s a very big deal to have your own shofar,” Greenfield adds, and Bialik concurs, adding that “it looks decorative year round on top of the piano.”

“I don’t have one,” Greenfield says mournfully (someone get this man a shofar stat!).

As Corden still looks verklempt and speechless, Greenfield tells him, “You’d love it.”

“I just feel like I’m utterly the wrong person to be hosting this show,” a still despondent Corden admits. “In 1110 shows I’ve always felt like I know where I am and right now in this minute I don’t know where to go.”

“Your presence right now is such a mitzvah,” Greenfield consoles him, using the Hebrew word for act of service.

“You’re a witness, that’s what you are,” Bialik added.

“I’m kvelling at the thought of that!” Corden responds, sharing his knowledge of Yiddishism.

We are kvelling, too (it’s in our name, after all). Truly, providing us with this clip is a mitzvah. Thank you James Corden, and thank you, Mayim and Max, for reminding us how much we love being Jewish in this small but delightful way. What a great way to start 5783.