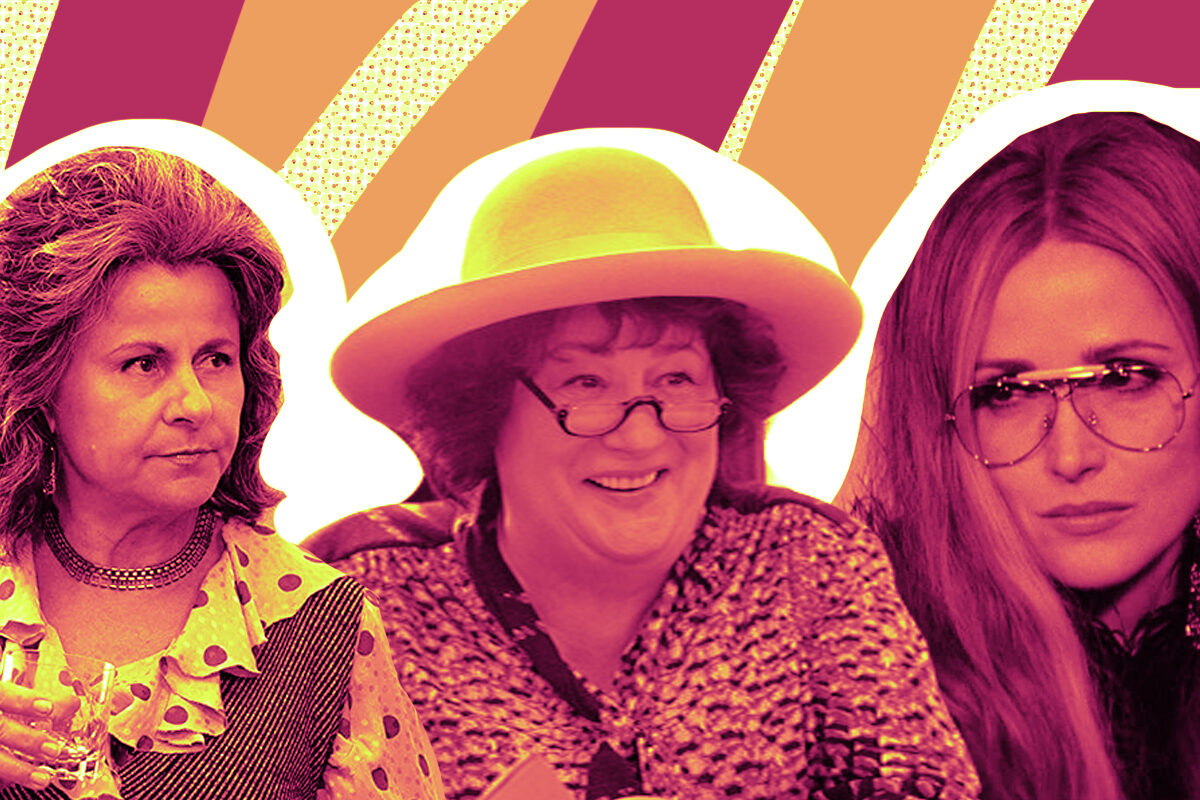 Mrs. America, the new limited series from FX and Hulu, is a beautiful, technicolor delight. Created Dahvi Waller, a master of complex period dramas with strong female protagonists (Mad Men, Halt and Catch Fire) the show’s visuals are thrilling, the acting is exact, and its exploration of history — namely, Jewish feminist history — is illuminating, prescient and, unfortunately, when contrasted with our 2020 reality, kind of a downer.

Mrs. America juxtaposes the leading Jewish feminists of the 70s, like Gloria Steinem (who famously co-founded Ms. Magazine) and Betty Friedan (who some consider the mother of second-wave feminism), with their ideological nemesis and the series’ star — the all-American conservative writer Phyllis Schlafly. Played by Cate Blanchett, Schlafly is portrayed as a sort of real-life anti-hero, a la Breaking Bad‘s Walter White, sans drugs and with more makeup and propriety.

Schlafly, you may know, led and won the fight against the ratification the Equal Rights Amendment (ERA) in the 1970s. The slogan for her movement is oh-so-cringe when brought forward into present-day sensibilities: STOP the ERA, which stood for “Stop Taking Our Privileges.” Indeed.

While Mrs. America delivers remarkable true details from the lives of these women, it does take some liberties with their stories. It is, first and foremost, a work of art and entertainment, and it really brings the technicolor trends of the 1970s to life.

Like Mad Men — where Waller was a writer and a producer — Mrs. America nails its time period, and it also simmers with a constant, humming melancholy. These women take one step forward and two steps back. Their personal and political lives are rife with concessions — and in that way, the real fights of the show remain timeless. After all, we are still fighting for access to abortion; for access to the same quality of healthcare; for equality, in general.

Shirley Chisholm (Orange Is the New Black‘s Uzo Aduba), the first woman to seek nomination for president, is an important character in the show. And yet, half a century later, we’ve still only had one woman nominee. And despite recent advancements, 50 years after the struggle of Steinem and her counterparts, the ERA still isn’t ratified.

Yes, that’s depressing. Yet remembering these women, the complexity of their fights, their ferociousness as well as their failings, is enlightening.

There’s the legendary Betty Friedan, played by British actress/comedian Tracey Ullman, who channels perfectly the abrasiveness of the Jewish writer, known for not hiding her rage. In her groundbreaking book, The Feminine Mystique, Friedan discussed “the problem that has no name,” namely, the dissatisfaction and unhappiness of the American housewife.

As her friend, writer Natalie Gittelson, says in the show, “without her, there’s no NOW [the National Organization of Women, which Friedan founded], no Women’s Political Caucus, no NARAL. We get to do what we do because she risked everything. So, before you tell her what she can and cannot do, consider just saying thank you.” That lecture is directed at Gloria Steinem, with whom Friedan’s relationship is fraught.

Steinem is portrayed in the show as impossibly cool, calm, and thoughtful by Rose Byrne. In the episode named “Gloria,” Steinem’s determination to make abortion legal is particularly moving, as she hears testimonies from women about their experiences getting the procedure done illegally. The episode dovetails with a fairly accurate portrayal of Steinem’s own abortion, which she got in London shortly after leaving her fiance.

Then there’s Bella Abzug, the chutzpadik and badass politician from New York who was thrice elected to serve in Congress, and who first ran with the slogan: “This woman’s place is in the House … the House of Representatives!” Abzug is played by the legendary Margo Martingale, who brings incredible conviviality, maternal sensibilities, and serious brashness to the role. (Another important feature is Abzug’s amazing hats, which Martindale looks fabulous in.)

The performances from these three actresses are top-notch, but I  admit it is sometimes a bit uncomfortable to see so many amazing Jewish women being portrayed by non-Jewish actresses, especially when it comes to Friedan and Abzug, who wear their Judaism on their every fiber. Are their heavy accents and Yiddish peppered speech accurate, or is it caricature? Is it a little of both? It’s hard to say.

There are only two main Jewish characters played by actual Jews, though if you are not well versed in this era of history, you may not know about them. Ari Graynor and Adam Brody play Brenda and Marc Feigen Fasteau (they both took on each other’s last name). The two met at Harvard Law School, and one of their first actions as a newlywed couple was to fight to make the Harvard New York Club co-ed. Brenda, one of the very few women in her Harvard Law class, became a successful lawyer at the heart of the feminist movement. She famously spent two years working at the ACLU’s Women’s Rights Project with Ruth Bader Ginsburg, and the future Supreme Court Justice makes an appearance in the show. 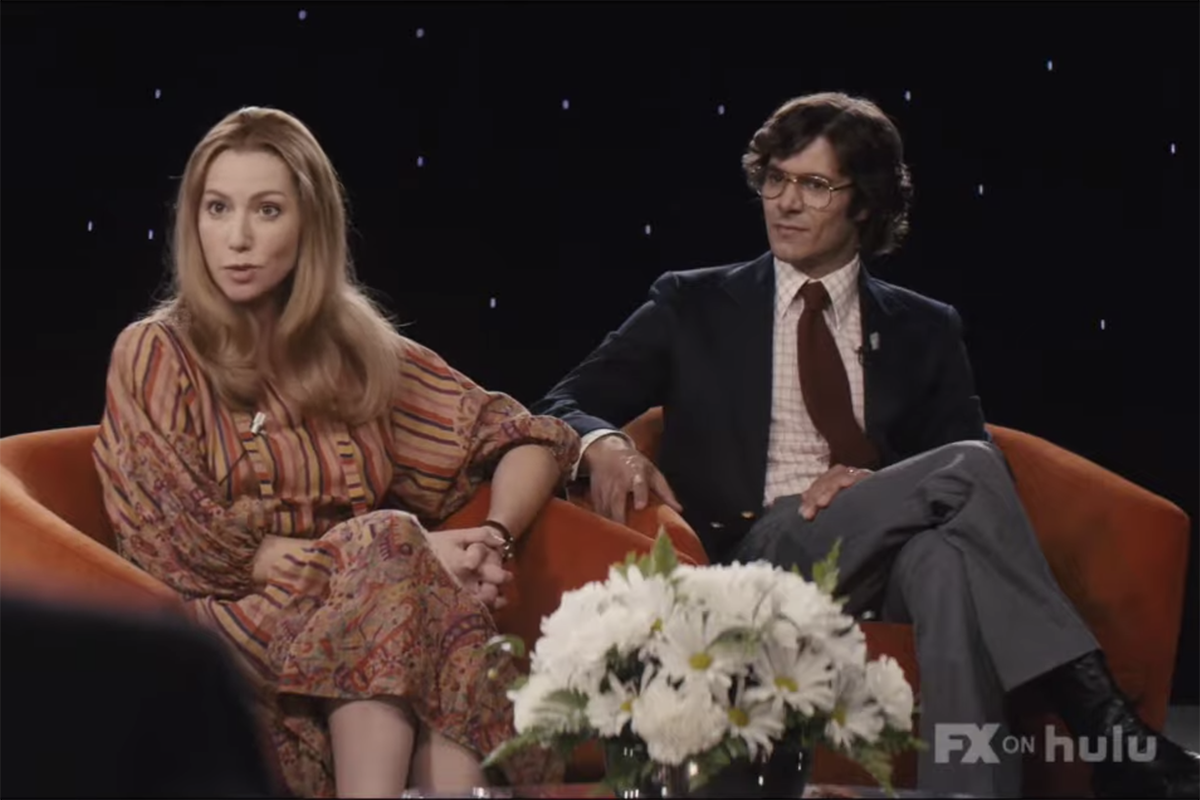 Graynor is inspiring and understated as Brenda, who is the image of professional competence and confidence. Her personal life, however, is a bit more complex — when she has an affair with a woman, her view of her idyllic and egalitarian marriage is shaken. In the midst of it all, she and Marc have to debate the Shlaflys (Phillis switched her regular dainty necklace for a large cross for the debate, a reminder perhaps of her Christian values as she sits opposite this Jewish couple?) and Brenda, cool as a cucumber, absolutely slays Phyllis on stage.

These women had chutzpah. They dared to fight for other women, and they were informed by their own experiences — and yes, also their “outsider” perspective as Jewish women in America.

Judaism is a recurring, if not central, theme in the series. “Never in my life have I identified myself as a Christian,” Steinem once said, “but wherever there is anti-Semitism, I identify as a Jew.”

In the second episode of the show, “Betty,” Friedan’s complex relationship with Judaism is showcased through one powerful scene. On date with a Jewish man, Friedan’s suitor frames her fight for equality through this line from Pirkei Avot: “Every assembly that is for a hallowed purpose shall in the end be established.”

Friedan says that sentiment resonates with her, but also acknowledges the aspects of Judaism that don’t align with her fight: “When I got up to speak to the crowd at Bryant Park, it suddenly hit me that down through the generations, through history, our ancestors prayed, ‘I thank thee, Lord, I was not created a woman,’ and I said from this day forward, women all over the world will be able to say, “I thank thee, Lord, I was created a woman.”

Abzug, for her part, fought to say Kaddish for her father at age 13, despite the fact that she was a woman, and to pray alongside men, despite the fact that women were not embraced by her orthodox synagogue. Jewish values stood behind all of her work — but this push and pull between Judaism’s emphasis on justice and its lack of progressiveness at the time of her youth greatly informed her struggle.

These women are inspiring icons, but as the show demonstrates, they are also deeply human and flawed. On stage, Friedan angrily calls Schlafy a “witch” during a debate (this really happened). Unlike her colleagues, she does not support LGBT rights, and conservatively censures her own daughters’ desire to dress in the latest fashions.  Steinem and Abzug fail to bring up voices of people of color — the inability of the white feminist movement, which features so many Jewish women, to truly support, lift up, and listen to feminists of color is a disappointing reminder, which stands in sharp contrast to  Black activist Flo Kennedy’s (played by Neicy Nash) dedication to intersectionality.

And yes, of course, emotions and egos get in the way throughout the show, for everyone. The personal is political, yes, but politics can also be painfully personal.

Despite their flaws, we should all remember Friedan, Abzug, Steinem, and Fasteau who took to heart the line from Deuteronomy: “Justice, justice you shall pursue.” They worked hard to give us things like safe and legal abortion, and their fights still haven’t ended.

Mrs. America is a truly special show and a reminder of the fights that we have won and those that have still not been won.