Ilyse Hogue Tells Kveller How to Talk to Kids About Abortion 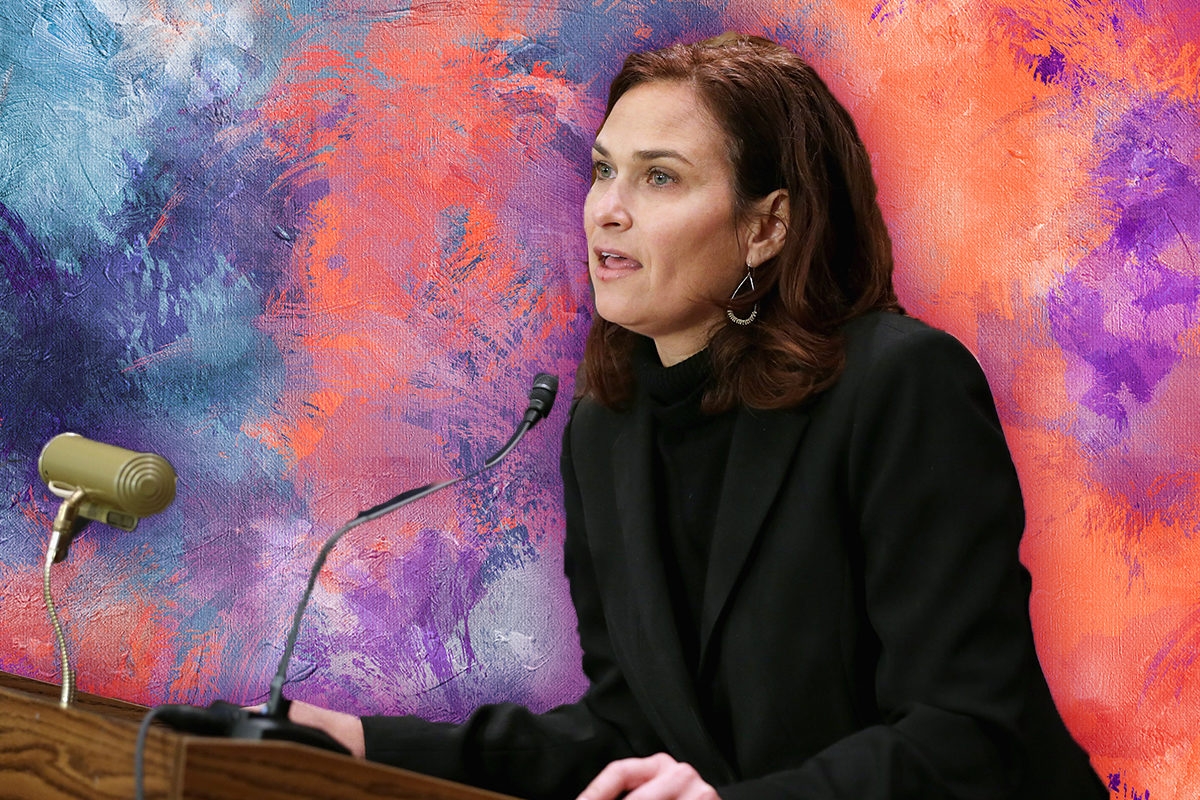 Activist Ilyse Hogue, the president of NARAL Pro-Choice America, is not a “silver lining kind of person.”

After all, it’s a dark time for reproductive rights in the U.S. The attacks on reproductive freedom are growing; President Trump is committed to “an agenda of reproductive oppression;” the courts are becoming increasingly stacked against pro-choice agendas.

At the same time, however, the pro-choice activists are louder and more organized than ever; the landscape of fighting for reproductive justice has fundamentally changed in the last decade. Take, for example, NARAL’s membership: When Hogue, 50, became president in 2013, the organization had around 300,000 members. Today, in 2019, they have 2.5 million members.

“I do actually believe that the silent majority is becoming a lot less quiet,” Hogue tells Kveller in a phone interview. “We’ve always had the majority of people in this country believing in abortion access and reproductive freedom, and they’re becoming a lot more vocal. And we’ve seen that both in how politics — and politics of protest — have played out, and how central these issues are to the conversation.”

Fighting reproductive oppression is a central tenet of NARAL, which was founded in 1969 and advocates for reproductive access of all kinds, from abortion services to paid parental leave.

The term, if you’re unfamiliar with it, “is our acknowledgement that when you deny people the fundamental freedom to make very important decisions that affect their entire lives and reproduction, the impact is one of oppression. It is one of controlling people’s lives, controlling their choices, and it disproportionately affects people without means,” Hogue explains. “It’s not just a moral objection to a medical procedure which people are entitled to have. It’s a campaign and an agenda to use policy to control other people’s lives.”

The best way to fight this campaign? By speaking up — loudly —in favor of reproductive freedoms.

One way this is accomplished is through social media. “I’ve seen super profound conversations happen in my Twitter threads, where people are really seeking to understand each other,” Hogue says of her 51,000 followers. “I think that all of that is super positive.”

Social media plays a huge role in the work NARAL does — and the Jewish mom-of-two is very adept at using her platform. And so, when a friend texted her a photo of tampon cookies that her daughter made, she knew just what to do: She tweeted it, and it promptly went viral.

My friend’s 7th grader goes to a school where the kids organized for free tampons in the bathroom. The male principle said no because they would “abuse the privilege.” The kids decided to stage a cookie protest. Behold the tampon cookies! pic.twitter.com/jz2KtbhOhS

The tweet was covered everywhere from Cosmopolitan to Delish to the India Times. But Hogue is not surprised: The story — of wanting free tampons — strikes a chord for many.

“I was not surprised by the response,” Hogue says. “I thought it had all the elements of what makes a great story, that people want to share. What I was intrigued by was the intensity of the response and the connection to other issues.”

“A fight for free tampons is not disconnected from economic security, from reproductive rights, from rape culture,” she explains. “There really is this unifying thing that’s happening: All of these little stories are a part of a system that has relied on sexism and misogyny to implement all sorts of unjust practices and policies that disproportionately affect women and girls. People [have] kind of had it, and they want to change the system, not just the policies within it.”

Before she shared the photo, Hogue made sure to clear it with her friend. Consent on social media is something she thinks about a lot, particularly with regard to her family. As she explains, “I never share my children. Sometimes I share stuff about my spouse, but he’s always consented.”

While her kids, twins born in 2015, may be off limits, Hogue is not shy when it comes to posting about her Jewish identity. Hogue explains that she shares the things that inform how she operates in the world, and a big part of that, for her, is Judaism, “both in terms of the spirit of tikkun olam, and in terms of where I have actually felt oppressed or othered because of an identity,” she says.

6th and I synagogue–where we planned our wedding and our blessings for our newborns–was defaced with swastikas. Wise words from @rabbishira “We will respond to this hateful act with open doors, in resilience and spirit, living Jewish lives of joy, optimism, and pride.”

Growing up Jewish north of Dallas, Texas, she explains, there was always a sense of feeling unique. Hogue recalls, “There weren’t that many [Jewish kids] in each school, but then we would go to Sunday school, or to Jewish summer camp. And so I had lots of friends who lived in lots of different places. And that was really awesome.”

However, she still encountered a fair amount of anti-Semitism; everything from hearing on the playground that she killed Jesus to parents in the community being concerned that she would “spoil Christmas” for their children.

Now, the Jewish value of tikkun olam — repairing the world — is how she talks to her kids about her activism.

“My kids go to Jewish school, so we talk a lot about tikkun olam and we’ve made it a practice,” she says. “One of the things that we really do believe is you have to talk about issues of oppression and freedom and justice from an extremely young age.” That means Hogue and her husband are aware of what books their kids are reading, who’s pictured in the books, who’s writing the books, and so on.

“One of the things that I thought a lot about when I took this job, is the first time a lot of kids from pro-choice families hear about abortion is on the playground, from kids from anti-choice families with their frame of ‘that’s murder.’ And they come home and they [ask], ‘What’s abortion? Why is it murder?’ instead of actually just internalizing that [abortion] is a normal part of life.”

Hogue encourages parents to talk to their kids about reproductive freedom from a young age. Talking, she explains, is empowering, and “your opportunity to instill your values and not perpetuate the stigma that the other side seeks to bring, and make it an empowering part of your child’s upbringing. The earlier we talk to them about that, and the normalcy of pregnancies ending in different ways, the more empowered they will be as they go out into the world and navigate these complicated situations.”

For adults, being public about being pro-choice, and asking candidates about their positions on reproductive justice, is something that’s crucial as we head into an election year.

“We are the majority, and they win when we are silent — period, full stop,” Hogue says. “One of the best things that we can do is just be vocal. So ask your candidates that question. Ask where they stand. Ask it of candidates you support, ask it of candidates who are seeking your support. Sunlight is the best disinfectant.”

For every person who said there’s no need to #AskAboutAbortion because they are all pro-choice: all candidates support impeachment inquiry. Should we not talk about that either? #DemocraticDebate

The other piece of advocating for pro-choice candidates and positions? Speaking out about why you, personally, stand for these issues.

“Now is the moment to make our voices heard and make sure people absolutely know what’s on the line,” she says. “This is a moment for everybody to stand up for all women who need these protections, who need these policies in order to live the lives of their choosing and contribute in ways that we know add value. That just comes from from speaking up.”

Talking with Hogue made me want to go out and shout from the rooftops that reproductive justice is the most important issue we need to fight for. Her optimism, even if she doesn’t believe in silver linings, is infectious. And yet, it’s so hard to feel hopeful in the midst of bad news. So, I asked, what gives her hope?

“Make sure that when you’re looking at the bad news, and certainly using that to help people understand what’s at stake, you’re lifting up the good news,” Hogue continues. “It’s the essence of organizing. People organize because we believe in a better future, and showing the examples of how that works is the best way to make it real.”

Image of Ilyse Hogue in header by Chip Somodevilla/Getty Images.